Outside the unused airport in the Elliniko area of Athens, a group of Afghan women take off their sandals before sitting down on a blue blanket. Behind them is the old terminal building, which has been their temporary “home” for months, for many more than a year.

There’s rubbish everywhere, shattered windows have turned into gaping holes and some places reek of urine.

“I have been in this camp for 1 year and two months without a destiny”, a woman with a burgundy headscarf said, tears trickling down her face.

The government is now starting the process of evacuating the camp. But for these women, their destiny is still unknown. No one we talk to knows exactly what will happen to them.

“The uncertainty is killing us”,  Afghan woman.

Amnesty has visited the Elliniko camps several times since they opened around a year and a half ago. Every time the stories have been the same and this visit is no different: appalling living conditions, lack of security, severe anxiety caused by former traumas and not knowing what the future will bring.

“We’ve been through hell here,” one woman said.

Women have explained to Amnesty International what “hell” means if you’re female: from depending on others even to use toilets due to security risks, to not wanting to leave their tents due to incessant verbal harassment.

Give them a voice

Since April 2017, Amnesty has been asking people to take action to demand that the authorities consult residents about their needs and provide them with adequate housing before closing the camps. In particular, the special needs of women and children must be met, and therefore women must be consulted.

During Amnesty’s visit to Greece this month, we were not allowed access inside the camps. But all the refugees and migrants from Elliniko that we spoke to told us that they have been left in the dark as to when and where they will be transferred to. On 23 May, the Greek authorities told us that they have finally started talking to  residents individually to arrange adequate housing. They say that people will be placed in new accommodation according to their individual needs.

While this sounds promising, lack of clear information for so long has led to severe anxiety and fears among the already tired residents of Elliniko.

During the consultation process it is extremely important that their voices are finally heard.

“We have felt a lot of anxiety and nervousness. Will they take us to a worse or better place?” a woman resident of Elliniko said.

When European countries started closing their borders these refugees were suddenly trapped in Greece. Each passing day, the dream of a safe future for themselves and their children becomes more and more distant.

“Day and night have become the same now. We have lost the concept of time,” a woman said.

Many are worried about their sons and daughters. Living in such cramped and unsafe conditions has caused psychological problems for most of the residents, including the little ones.

“My children have changed a lot. It's difficult to control them,” a woman said.

But despite all the difficulties, these women continue their struggle for a better future. They are growing tired, but their strength in such adversity is truly inspiring.

“If it weren’t for our small children, we would rather not live”, one woman said, her voice calm and matter-of-fact.  The women around her nod in agreement.

The situation has also taken its toll on Golroz, from Afghanistan. She has previously suffered from severe migraines, and now they have returned.

“Here in Elliniko, they started again. This time, I don't throw up. But my jaw gets locked.”

When Amnesty met Golroz and her family in July she was pregnant. Now she’s carrying a little girl with hearts on her dress in her arms. Armita, who is 8 months old, has only ever lived in the camp. Where will Armita and her siblings Ali (12) and Ismahil (3) go next? They don’t know. 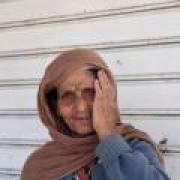 Rumour has it that at least some residents might be sent to a camp in Thiva, a town north of Athens. But this could break up networks they have spent months building up.

Golroz’ aunt Bibi is terrified. A month ago, she and her granddaughter were moved to an apartment in Athens, where she lives with two other families. But the rest of her family are still in the camp:

“Where is Thiva? Do you know'? Who is going to help me if they go there?' Her eyes are filled with tears when she talks to us.

These Afghan women risked their lives to reach Europe in search of safety. Instead, they have ended up stuck in Greece, living in unbearable conditions for more than a year, and who knows where next?

These strong and brave women should be treated with the respect and dignity they deserve.