A bittersweet verdict on the path to justice for Berta

Almost three years after the murder of well-known Indigenous rights and river defender Berta Cáceres in Honduras, there are finally some bittersweet steps towards justice. They are half steps, fraught with troubling omissions and violations of due process. But important steps forward none the less. 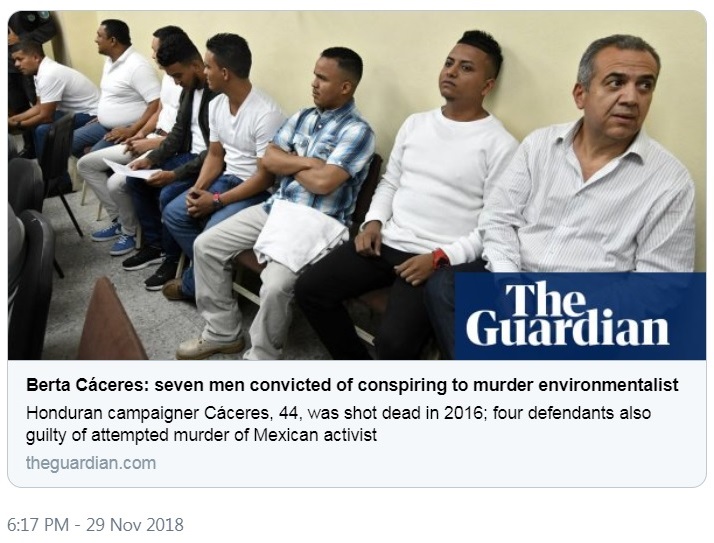 In a unanimous verdict, a three-judge tribunal of the National Criminal Court convicted seven men of involvement in the murder of the beloved human rights defender who was awarded the prestigious Goldman Environmental Prize for her tireless, courageous efforts to stop the Agua Zarca dam because of its impacts in Lenca Indigenous territory. 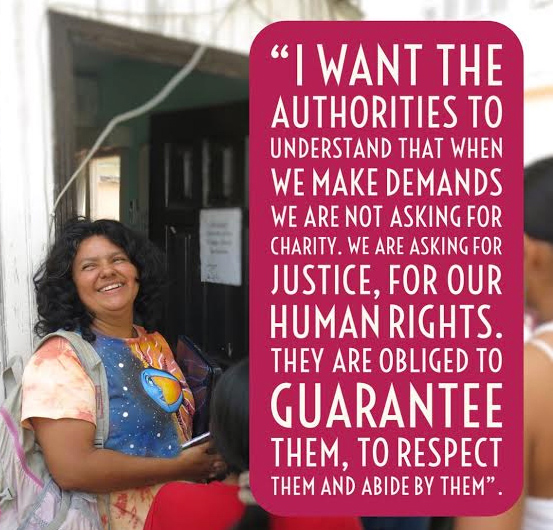 The judges concluded contract hitmen burst into Berta’s home on the night of March 2, 2016 and gunned her down on the orders of executives at Desarollos Energeticos S.A. (DESA), the company developing the Agua Zarca project. During the hit, Mexican environmentalist Gustavo Castro (below left), who happened to be visiting Berta’s home, was also shot but survived by playing dead. 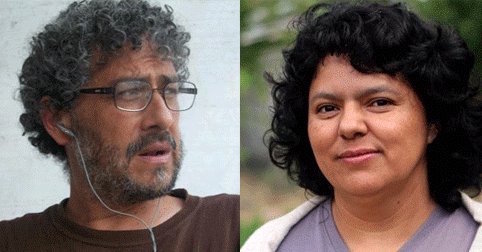 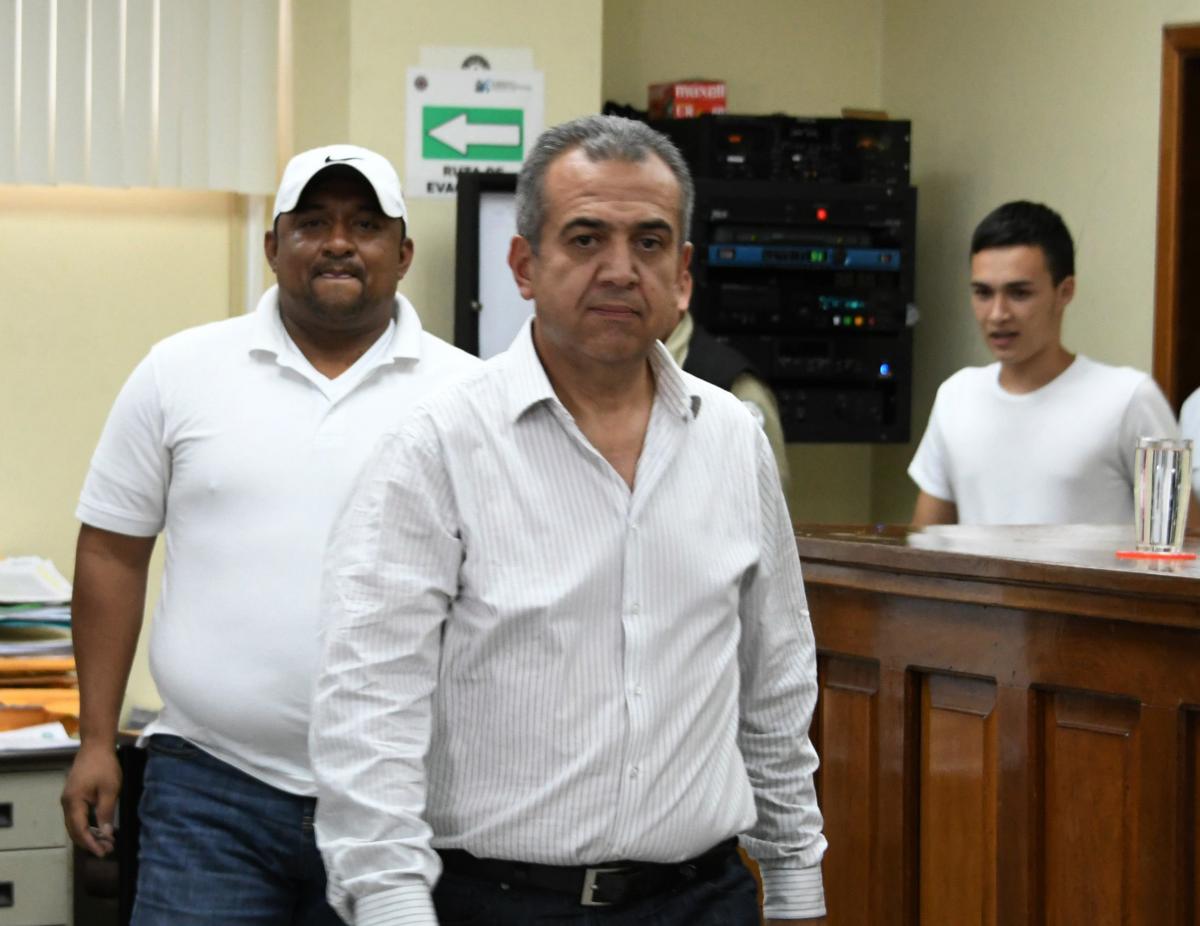 Elvin Heriberto Rápalo, Henry Javier Hernández, a former special forces sergeant who served with Díaz, Óscar Haroldo Torres, and Edilson Duarte Meza were found guilty of carrying out the murder of Berta and attempt to murder Gustavo Castro. The seven convicted men will return for sentencing on January 10. 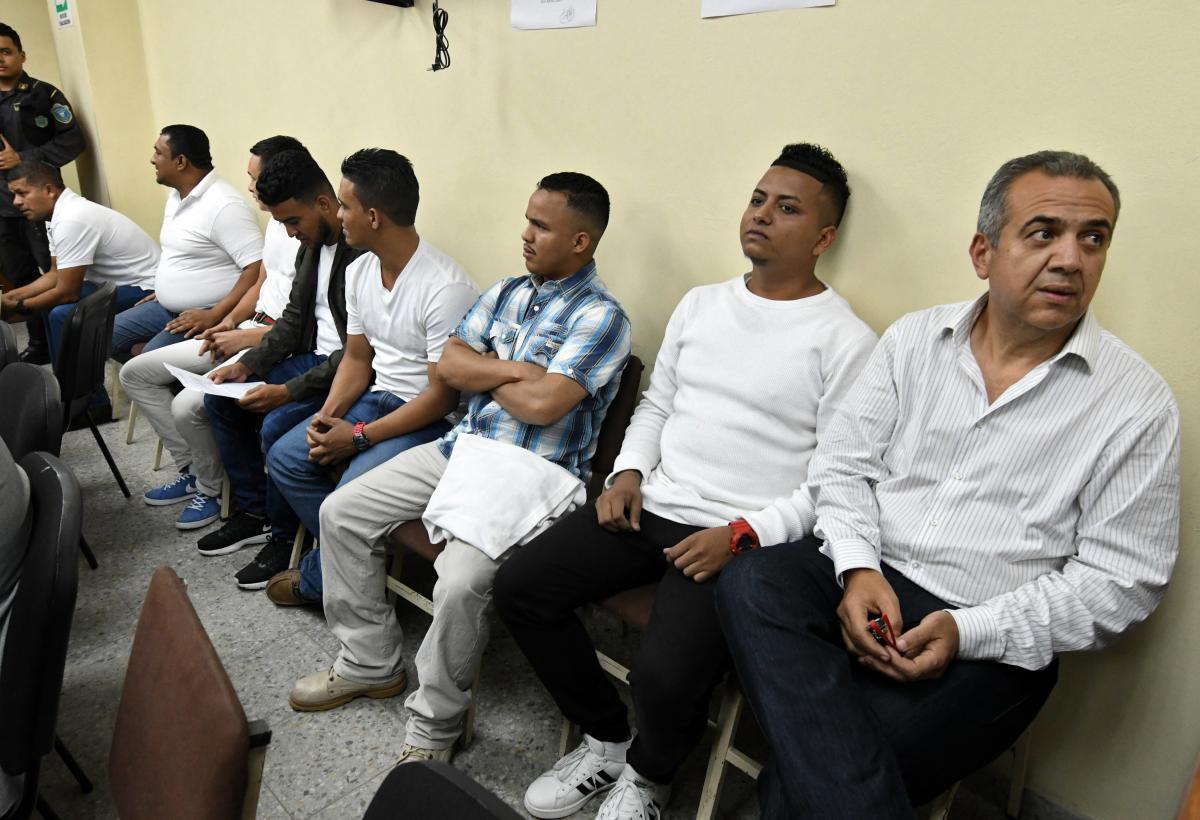 Reactions to the verdict

“These convictions are the first step in the search for justice,” said Berta’s daughter Bertha Isabel, on behalf of her family, COPINH, Gustavo Castro and their lawyers during a joint statement delivered outside the courthouse.

The defenders were crystal clear that the struggle for justice is far from over.

“The structures and people who gave the money for these criminals to assassinate Berta Cáceres are still free and able to continue carrying out crimes like this one with impunity,” said Berta's youngest daughter Laura. “We ask the state and its institutions what interests are at stake that motive you to behave in a way that protects the masterminds? Why, despite clear evidence of their participation, have they still not been charged almost three years after this hideous crime?”

Half the truth, says Amnesty

“The verdict of this trial offers only half the truth,” agreed Amnesty International’s Americas Director Erika Guevara-Rosas. “Failing to investigate & prosecute all the perpetrators who ordered & planned this atrocious crime means the Honduran state owes a huge debt to truth and justice.” Read our full public statement here.

A troubling backdrop of failures and violations

Amnesty has monitored the response of authorities in Honduras since the horrifying attack on Berta Cáceres and Gustavo Castro almost three years ago. We have given this work considerable attention because we know the quest for justice in this emblematic case has far-reaching implications for the protection of all defenders of indigenous rights and the environment in Honduras.

From the outset, and on multiple occasions, we denounced a deeply-flawed investigation that seemed intent on covering up who was behind the crime.

We also carefully monitored the trial and spoke out about multiple violations of due process that impacted on the victims’ access to justice, truth and reparation. These included forcing the family to be represented by the Public Prosecutor's Office, an institution they have repeatedly reported for infringing their rights and suppressing evidence.

In addition to our monitoring work, we have mobilized people in Canada to express their concern and create international pressure.

More than 59,000 people have signed our actions calling on Honduran authorities to guarantee truth, justice and protection of the human rights defenders of COPINH, who continue to suffer threats and attacks, including via a dangerous smear campaign by lawyers for DESA. Many activists have made visible their demand for justice and their solidarity via photo messages. 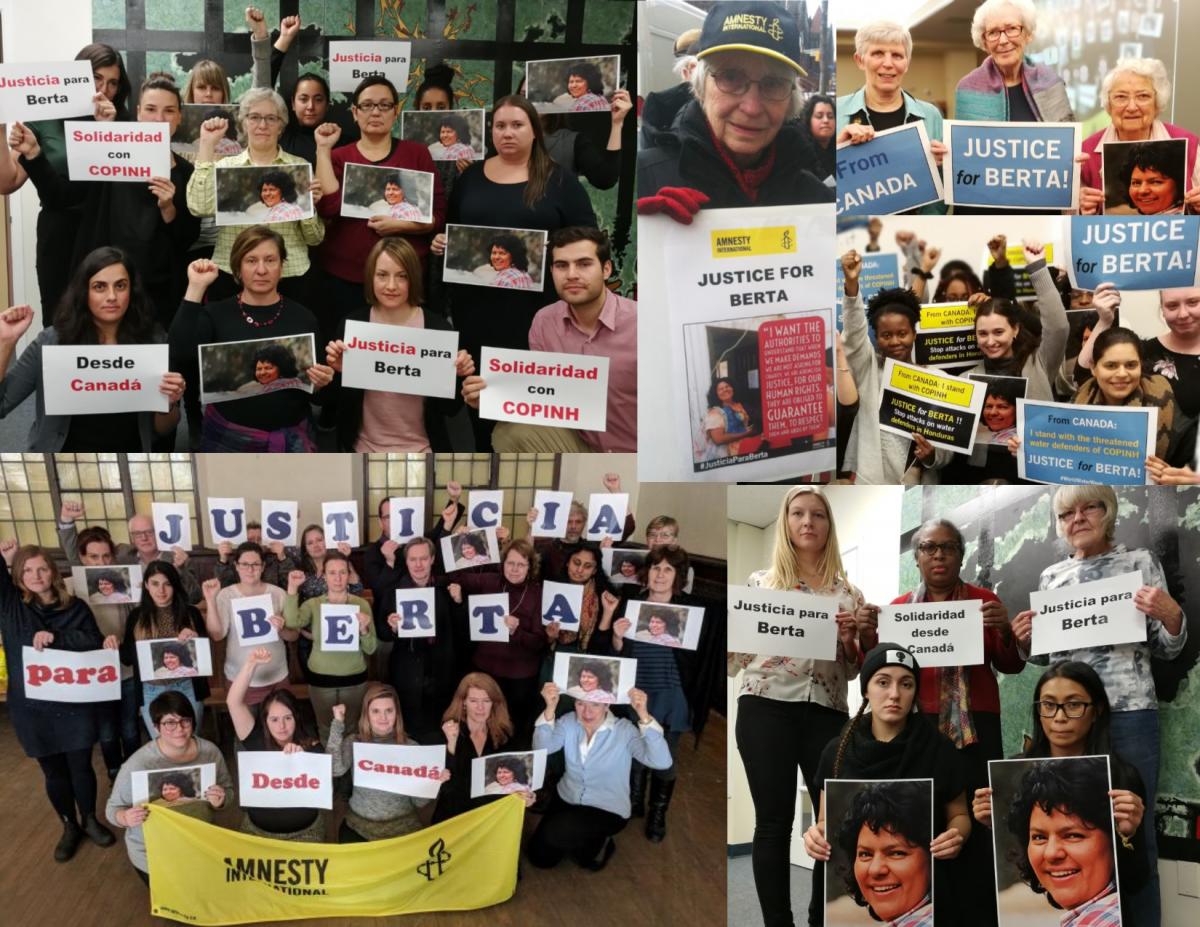 COPINH has signalled the value of these messages by sharing them in their communications, time after time. They underscored the impact of international support for their cause when they shared the news that DESA’s General Manager David Castillo (below) had been arrested in March. He is currently awaiting trial. 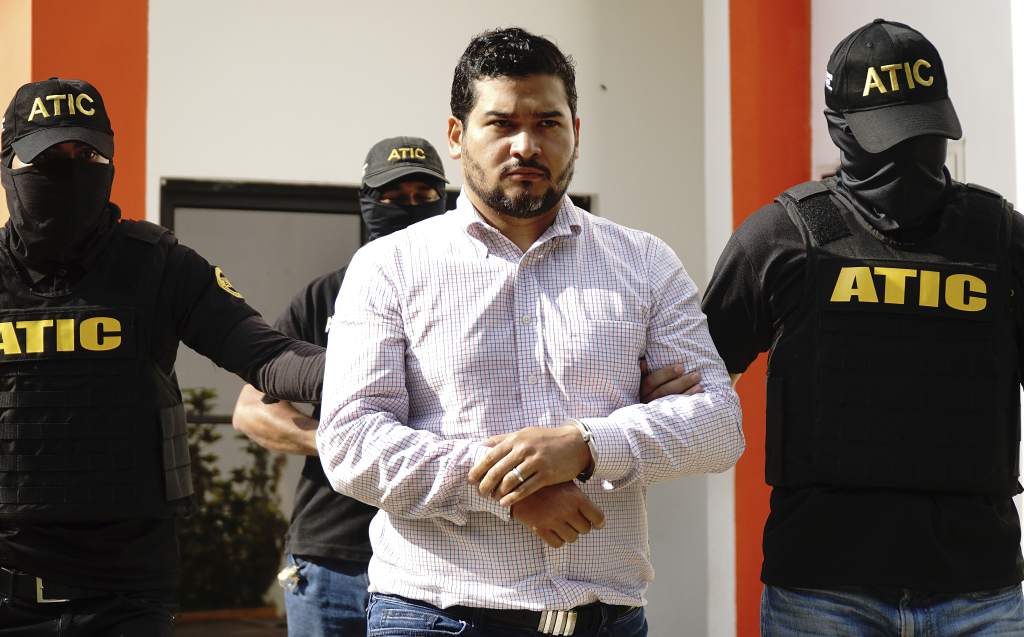 “Thank you for your support,” said Berta’s daughter Bertha Isabel Zuniga in an email message to Amnesty Canada illustrated with four hearts! 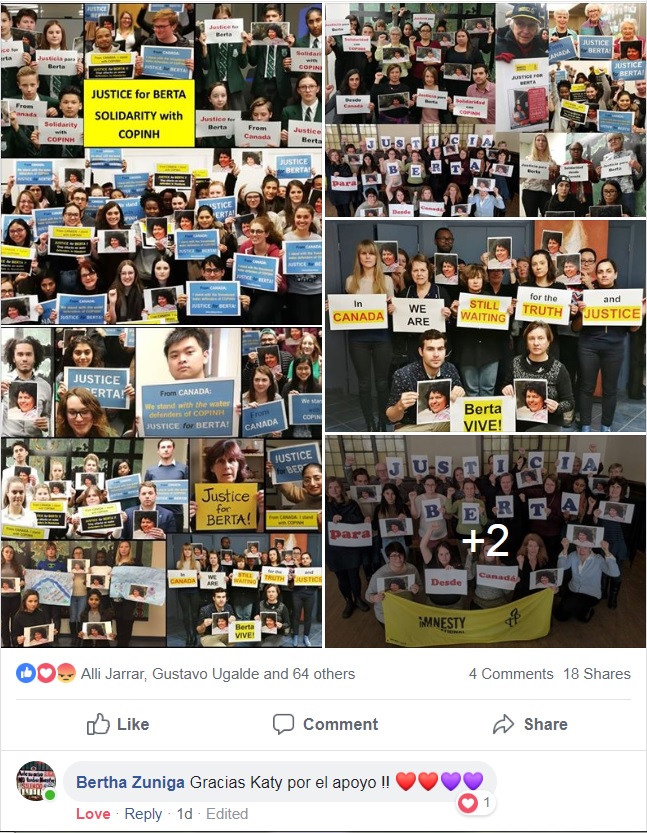 At their post verdict press conference, Bertha Isabel and her family had more to say about the vital importance of continued solidarity action from outside Honduras:

“Our family, Gustavo Castro, COPINH and our legal teams have been accompanied by those who believe in Berta Cáceres, in her words and her actions. We know you will continue to make a principled stand on the side of truth and justice in the battles to come, which we will wage with complete determination.”

There is no question that we will indeed remain firm in our solidarity and support. With COPINH, we are raising our voices now to demand that all the masterminds behind the murder of Berta are identified and brought to justice. You can help by adding your voice.

Seven accused finally found guilty of the murder of #BertaCaceres; four of them for the attempted murder of #GustavoCastro. In Canada, we're still waiting for the full truth. @MP_Honduras must identify & bring to justice ALL the masterminds #CapturaALosAutoresIntelectuales pic.twitter.com/fMwaczAjF9

It is a rightful struggle, full of hope and driven by a powerful rallying cry:

"Berta Did Not Die She Multiplied!"  #BertaNoMurióSeMultiplicó 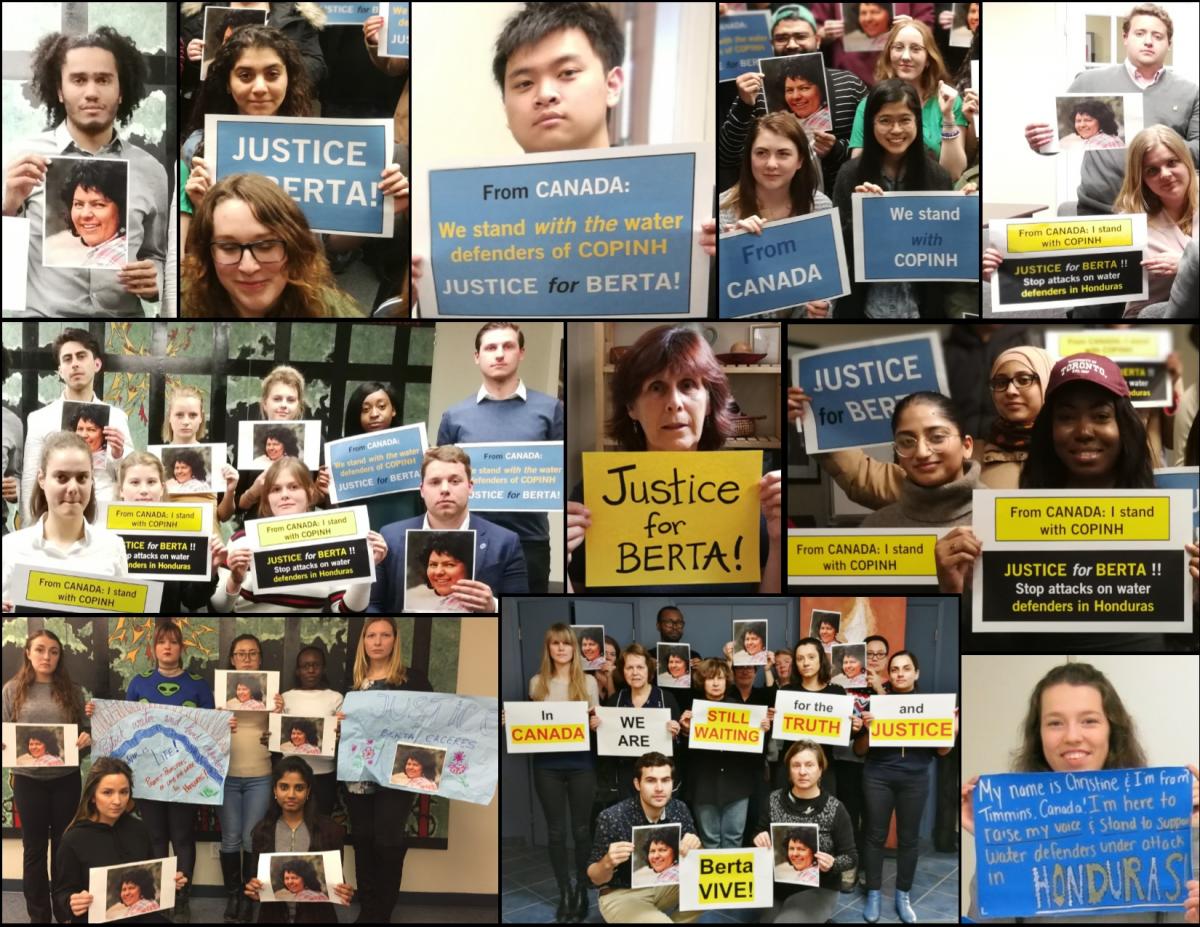 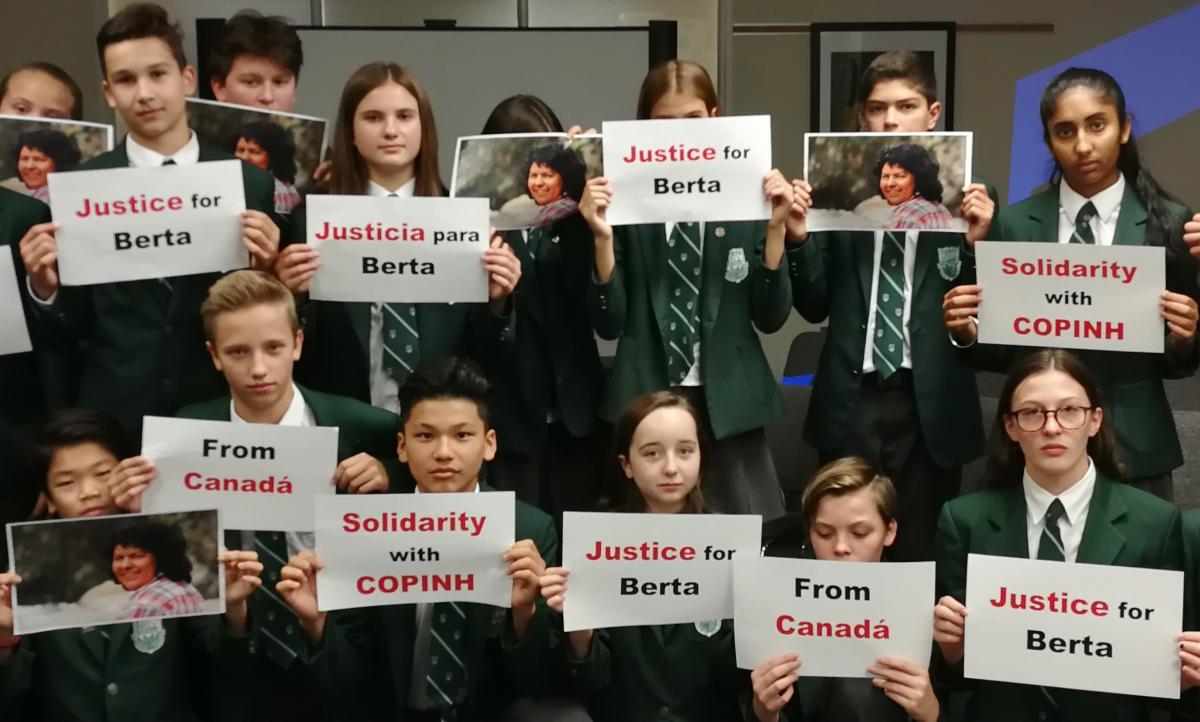 Find the instructions in this Activism Blog