On June 5, web programmer Saeed Malekpour will turn 43 behind bars in Iran. This will be the 10th birthday he has spent in Evin Prison. He was 33 when arrested and has now spent almost a decade in prison.  Almost a decade. Let it sink in for a minute: A decade without even a single day of furlough.

Saeed Malekpour was an ordinary immigrant in Canada. He came here, just like thousands of others. Just like me.

In 2008 he was a permanent resident of Canada, in the prime of his life, with a seemingly bright future in front of him. Then he went back to Iran to see his dying father. It was not the first time that he had travelled back to Iran. But this time, unlike others, he was arrested on street and taken for questioning. That was the beginning of a surreal nightmare that still haunts Saeed and his family a decade later.

In 2008 the Cyber Crimes Unit of the Iran Revolutionary Guards Corps (IRGC) was conducting a large operation called Gerdab (Whirlpool) with the goal of cracking down on online activities deemed “immoral” or “un-Islamic”. The unfortunate timing of Saeed’s return to Iran played right into their hands. As a web programmer, he had created an open source program for uploading photos to internet. The Iranian authorities said it was used on Persian pornographic websites. Saeed Malekpour has maintained that the use of this program on other websites was without his knowledge. But the authorities who arrested and later convicted him did not care about what he had to say.

Saeed was physically and psychologically tortured and spent over a year in solitary confinement. He was given false promises by authorities that if he cooperated, they would conditionally release him. The IRGC wanted ‘confessions’. They never cared how the ‘confessions’ were made; whether or not they were true, coerced through torture, or obtained through false promises. The adjective preceding ‘confessions’ has never been of any concern.

In a letter dated March 2010, Saeed Malekpour give a glimpse of what he went through during this time:

It is no wonder that he ‘confessed’. I would have confessed to the most heinous crimes imagined under those circumstances. His forced “confessions” were aired on Iranian state television before his trial and verdict.  This violated his right to the presumption of innocence and right to be tried by an impartial tribunal. The ‘confessions’ were aired while his family was mourning the recent passing of Saeed’s father. As a result, his mother suffered a heart attack. The pain and the shame was too much to bear. Saeed Malekpour’s televised ‘confessions’ were subsequently used as “evidence” to later secure his conviction in court. 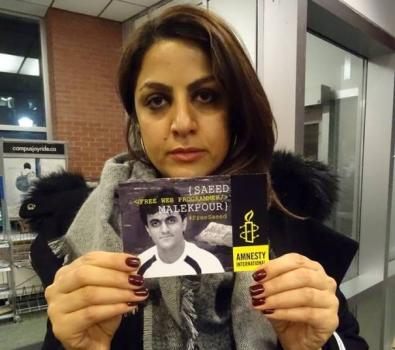 The court was not interested in truth, justice or fair process either. During the trial, the court dismissed Saeed Malekpour’s allegations of torture and other ill-treatment, arguing that they were lies. Saeed’s ‘confessions’  were upheld by the court.

Saeed asked for an IT specialist to testify on his behalf about the technical details of the case, but the court didn’t permit it. In the end Saeed was sentenced to death for “spreading corruption on earth”. Saeed’s sister, Maryam Malekpour, currently living in Vancouver, told Amnesty International her brother’s forced televised “confession” was the only “evidence” presented against him in court.

For the next two years, Saeed and his family lived under the unbearable shadow of his imminent execution.  In 2012 his death sentence was commuted to life imprisonment. This was indeed great news and a huge victory for Saeed, his family, and everyone campaigning on his behalf. But then another reality, less terrible but still grim set in. A young man in his 30s was sentenced to spend the rest of his life behind bars for a crime without evidence.

Overwhelming injustice has stained each phase of Saeed Malekpour’s story, from his arrest and mistreatment in detention, to his trial, conviction and death sentence. It will haunt him for the rest of his life.

Amazingly, we know that he hasn’t completely given up. He has been making wooden artwork in prison; including a beautiful necklace he made for me, with my name on it. In the face of the hopelessness of it all, he managed to make a gift for a far away friend he has never met. [Saeed’s artwork made in prison]

Unless something is changed, Saeed can expect to turn 50, 60, 70, 80 in Evin Prison. A life sentence is for eternity – unless something is changed. Saeed should not have spent a day in prison, let alone a lifetime. It falls on us to be his voice. Let us remember his plight and stand with his sister Maryam who has relentlessly campaigned for her brother’s release.

Former prisoners of conscience for whom Amnesty International had campaigned, call for release of Saeed Malekpour. Toronto. February 2017. Photo by Renee Saviour.

Be Saeed Malekpour’s voice on his birthday and every day.

Here’s What you Can Do

Share a photo of yourself with a solidarity message for Saeed on social media and/or send it to IranCoordinator@amnesty.ca. Use the hashtag #FreeSaeed

#HBDSaeed! In solidarity with #SaeedMalekpour, permanent resident of Canada imprisoned in rush for almost a decade. You are not forgotten. #FreeSaeed pic.twitter.com/ssiGRhaYvY