PLEASE NOTE: This action is open until the first week of June.

Throughout the month of May, we are collecting cards to echo the calls for action by mothers of the disappeared in Mexico. 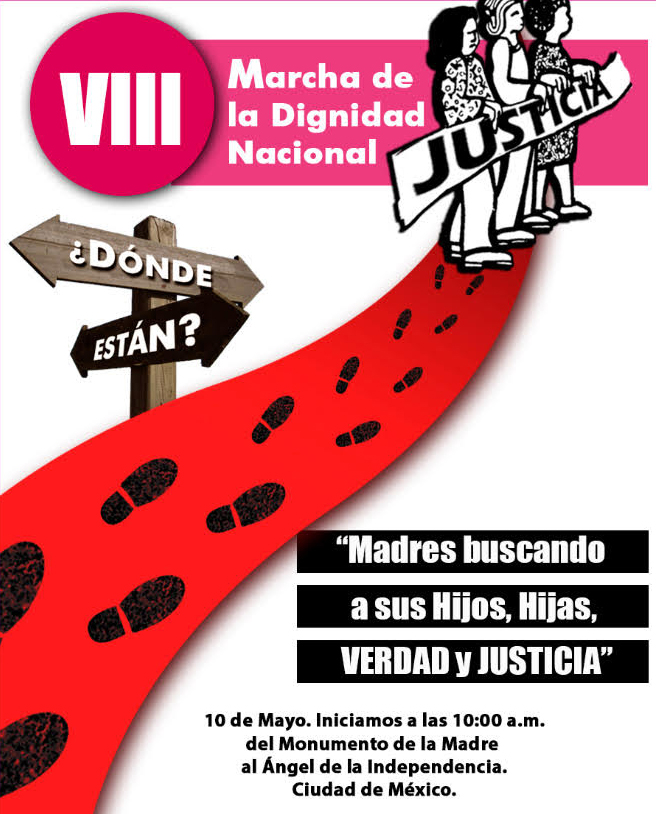 May 10 is Mother’s Day in Mexico. Thousands of mothers marked the date by taking part in a huge Mother’s Day March for Dignity (promoted in their poster, left), carrying the photos of sons and daughters who disappeared, never to be seen again. The mothers of the disappeared organize the march to make visible the massive dimensions of this heart-rending crisis and to call for action.

Our solidarity is vital!

More than 40,000 people are now reported missing in Mexico. It’s a staggering number that only continues to grow. Some people were abducted by criminal gangs. In other cases, public officials were involved.

For years, authorities have done little or nothing to help the mothers of the disappeared. Investigations have been non-existent or deeply flawed. Mothers are left to do the searching themselves, tormented by not knowing if their loved ones have been killed or whether they are being held captive in need of rescue.

Trying to uncover the truth is dangerous work. Mothers have been threatened and had to go into hiding. Others have been killed or disappeared themselves.

Even so, the mothers refuse to give up.

They have joined together in self-help groups that have multiplied and now form a national movement. Through their tireless work, the mothers have achieved a law that creates a National Search Commission and special investigators to bring disappearances to justice.

These are important commitments but they are yet to be implemented. So the mothers are speaking out to demand that everything called for by the law is actually implemented.

We can help by echoing the calls of the Movement of Mothers.

1. Write a card to Mexico’s President to support the mothers of the disappeared! 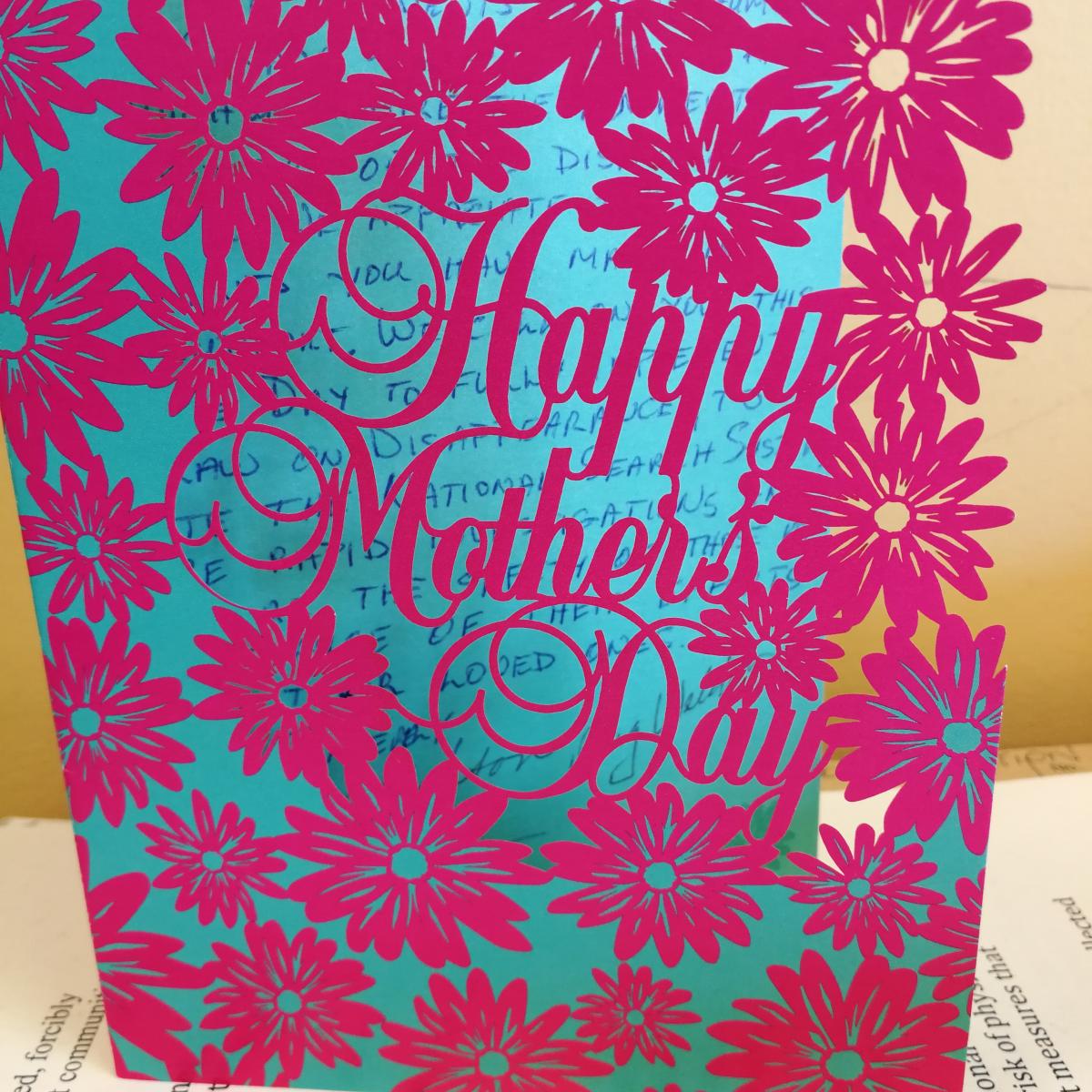 President López Obrador values opinions that come from the grassroots of society, including from countries with which Mexico has a close relationship.

The mothers of the disappeared have asked for solidarity from inside and outside Mexico to echo their voices and help them achieve urgently-needed advances.

A moment for hope and action!

Andrés Manuel López Obrador became president of Mexico last December and promised change. He expressed public concern about the crisis of disappearances and launched a special commission to investigate the disappearance of the 43 students of Ayotzinapa. Much more is needed. Public pressure can help.

Send us your cards so we can deliver them all together

Timing for this action

We will be collecting your cards up to June 6 before delivering them all together for maximum impact. 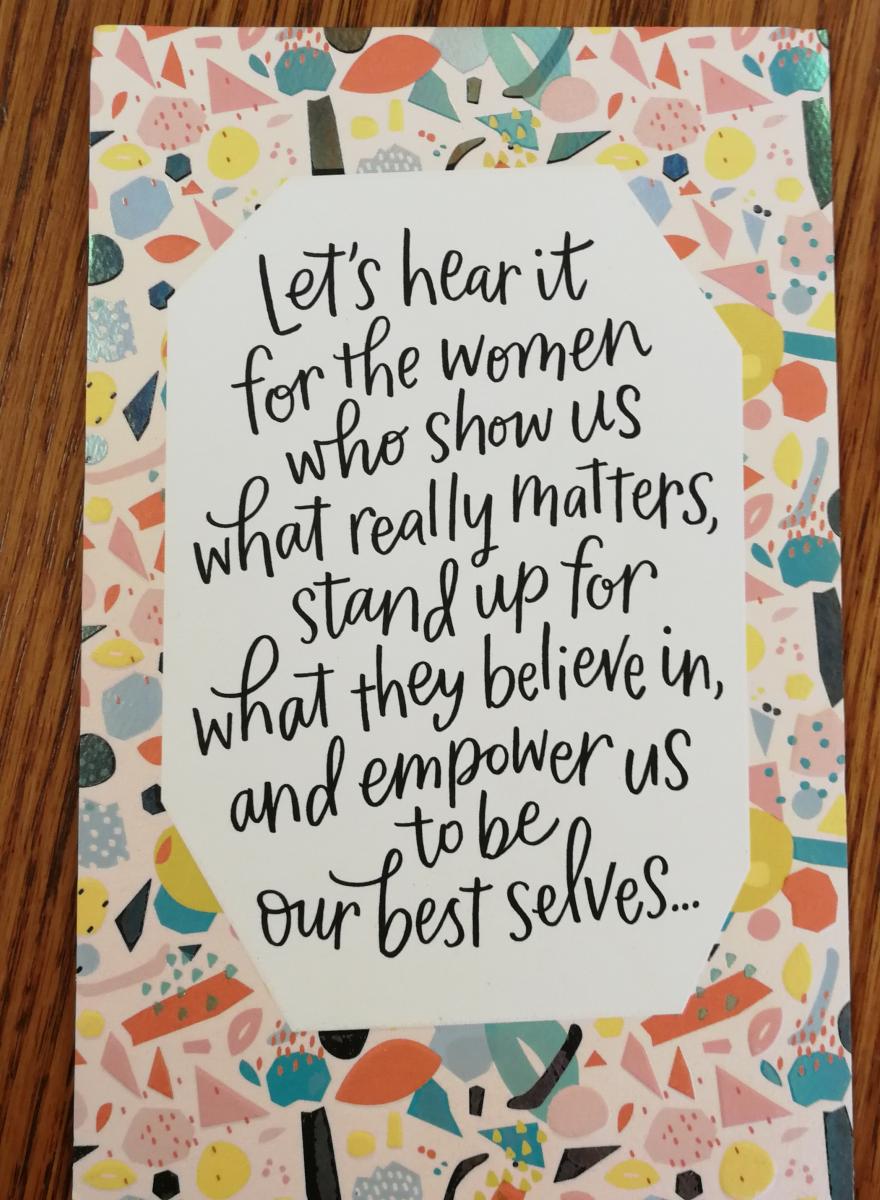 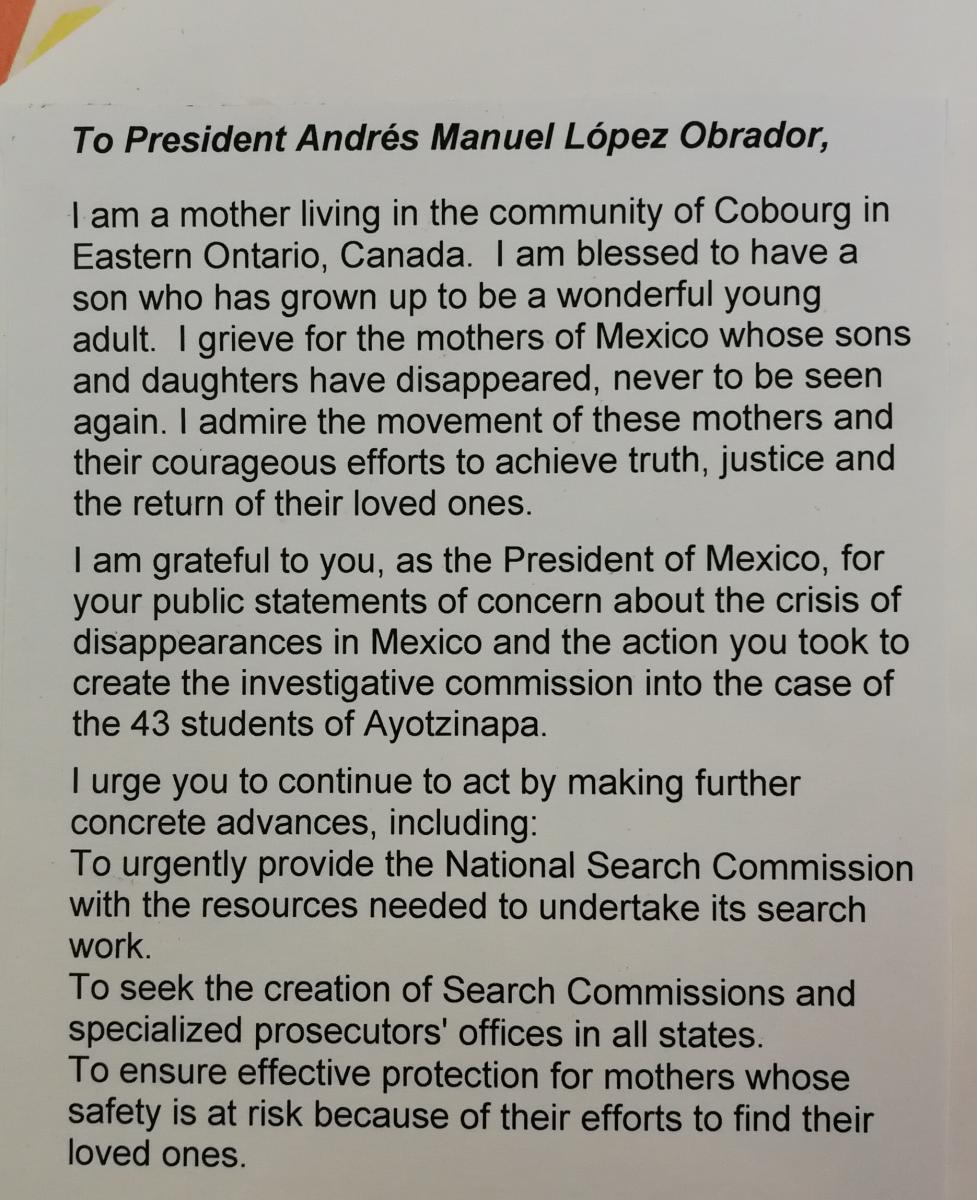 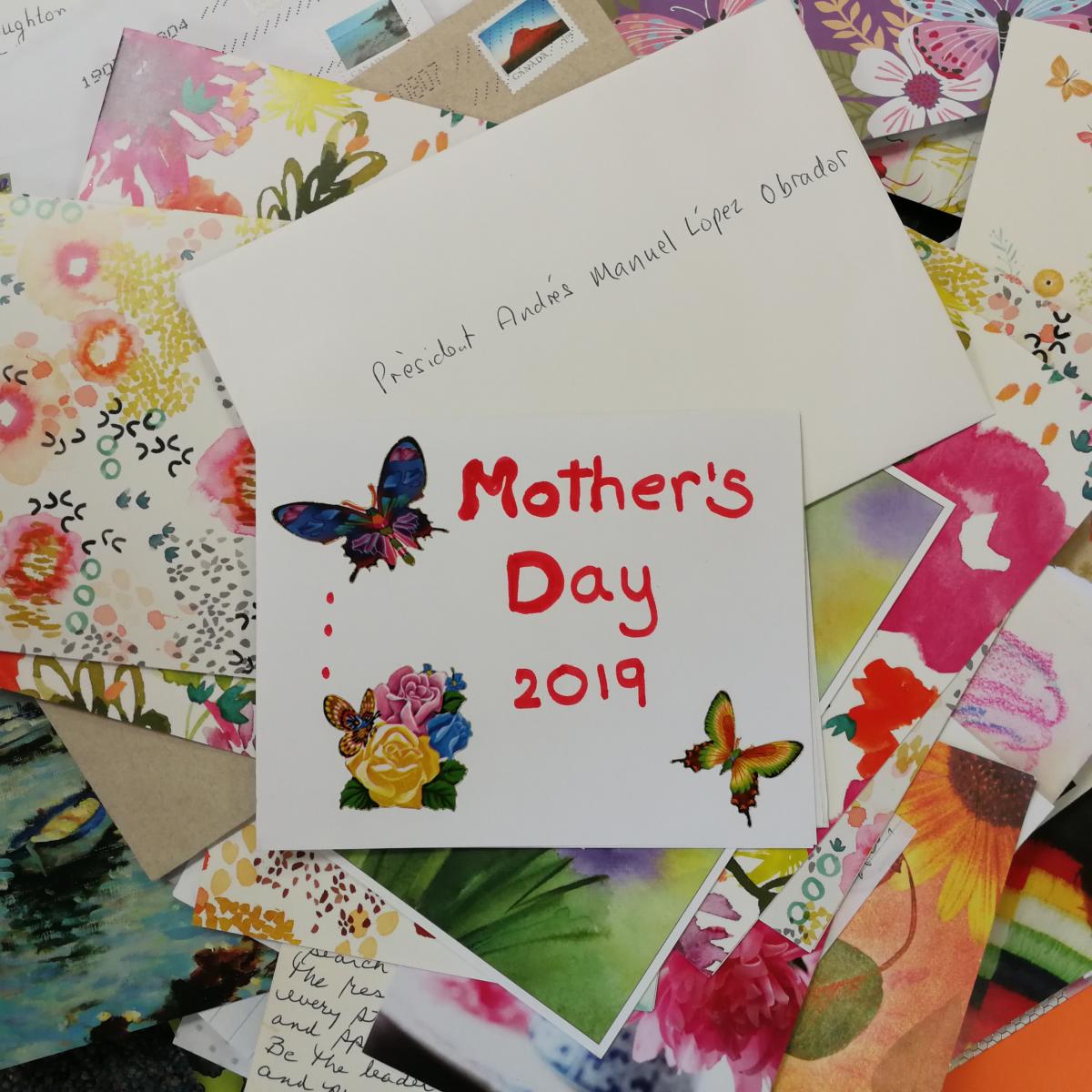 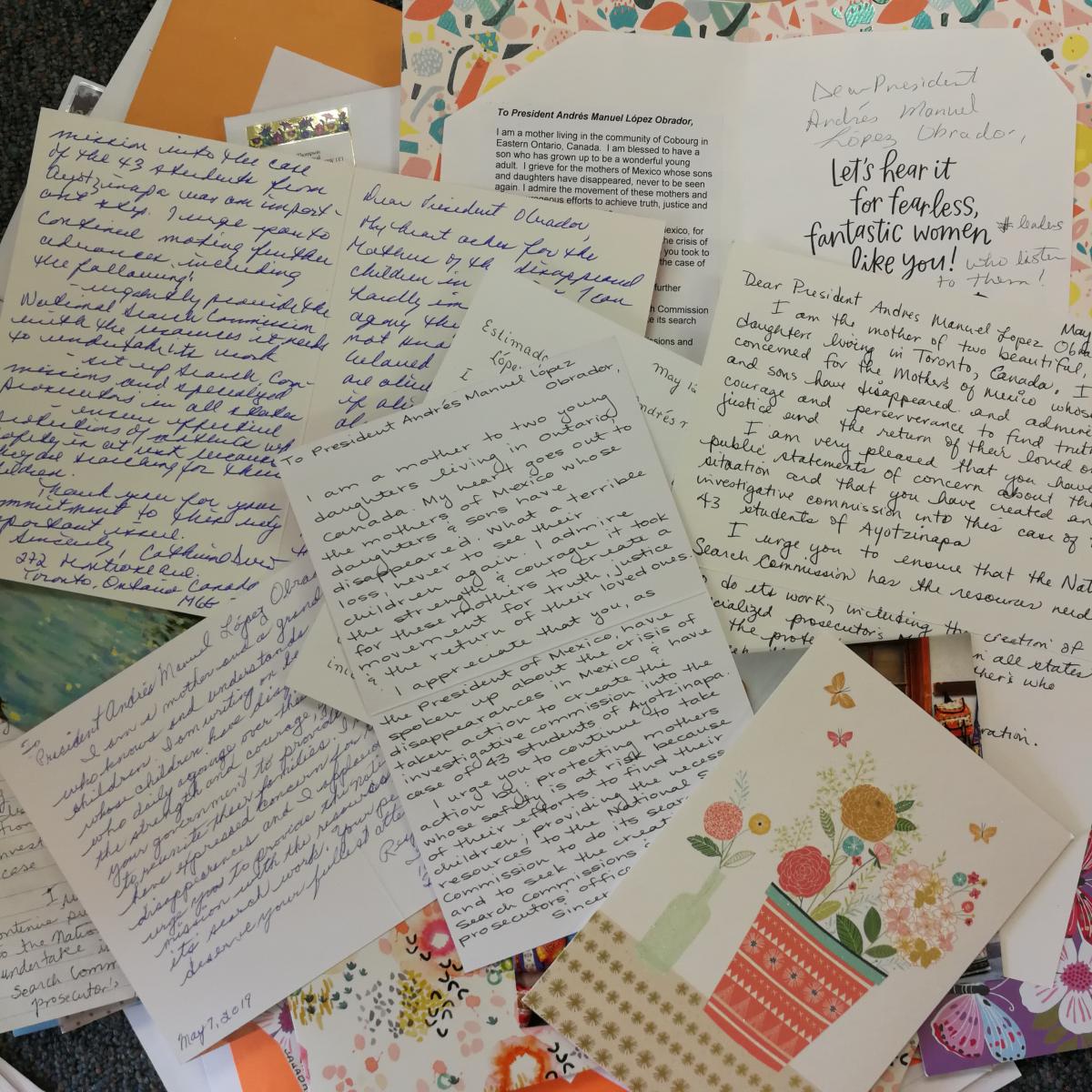 2. Use Social Media to Support the Mothers

Tweet Mexico’s President @lopezobrador_ . Tell him you are in Canada. In solidarity with the mothers of the disappeared, ask him to provide full resources for the National Search Commission. Use the hashtag #CanadaMexicoSolidarity so we can retweet your tweet. Also use the following hashtags in English and Spanish so others in Mexico will see your message of solidarity: #WhereAreThey? #DóndeEstán #IdentificacionYa #Justicia #10DeMayo

See sample tweets in English and Spanish below.

Thank you for taking action in solidarity with the mothers of the disappeared!