Anielle Franco is an English teacher, former competitive volleyball player, parent of an energetic toddler, and a powerful grassroots advocate for the rights of black women in Brazil.

She also happens to be the sister of renowned Brazilian women human rights defender and politician Marielle Franco, who was murdered in Rio de Janeiro earlier this year. Jackie Hansen, Amnesty’s Gender Rights Campaigner, reports on Anielle’s human rights work including her ongoing campaign for justice for Marielle. 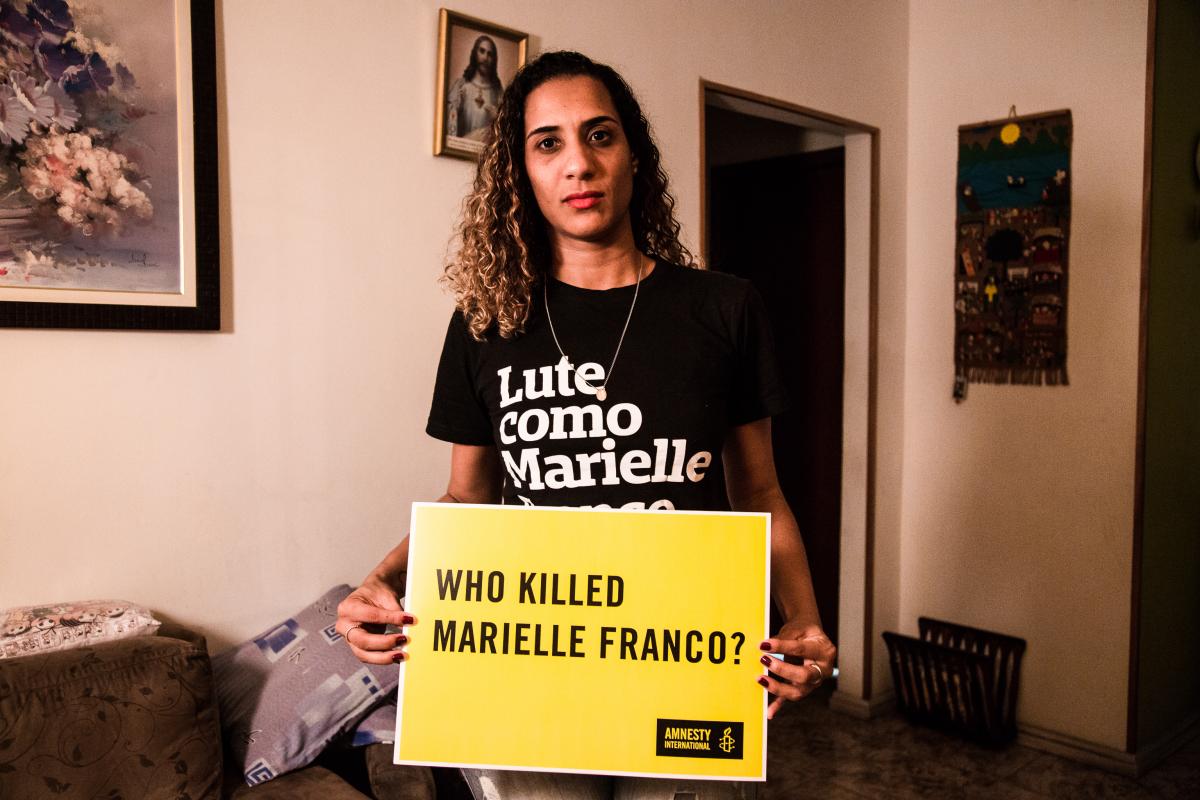 In September 2018, Anielle Franco travelled to Montreal, Quebec, to participate in a historic summit of women foreign ministers from around the world. She met with politicians, who, like her sister, are part of a minority: women in politics.

Anielle spoke to the ministers with love and passion about her sister. They were raised in a favela in Rio de Janeiro, and experienced discrimination because of the colour of their skin and their social class. In a country where the opportunities for black women are often limited, both went on to attend university and work in their chosen fields. They shared a passion for advocating for the rights of black women in Brazil. Marielle was also an outspoken advocate for young people, LGBTI people, poor people, and against police violence.

Anielle talked about her sister’s murder in March 2018 as she handed the foreign ministers flowers dedicated to her sister’s memory, and a photo of her sister. Marielle and her driver were shot to death in Marielle’s vehicle after leaving an event she had organized about black women’s empowerment. No one has been arrested for their murders.

Anielle Franco is leading a global campaign calling for #JusticaParaMarielle (justice for Marielle). She spoke of the trauma her mother experienced when she saw her daughter’s lifeless body. The threats to her family as they advocate for justice because “They believe black women can’t speak. They believe women can’t speak.” She called on foreign ministers to support and implement actions in their own countries and around the world that will ensure women like her can advocate for justice and equality without having to worry about online harassment, assaults, or worse.

While in Montreal, Anielle held meetings with women human rights defenders from around the world including two Nobel Peace Prize Laureates, many of whom have experienced violence and discrimination because they are women who dare to speak out publicly in support of human rights. At a public event in Montreal where Anielle spoke alongside some of these advocates, she said, “Women need security. Safety. What my sister didn’t have. What so many women human rights defenders don’t have.”

Before she left Montreal, we asked Anielle how hopeful she is about seeing justice for her sister’s murder. With great certainty and conviction, Anielle said, “I am hopeful.”

On March 14, 2018, as she was leaving an event she had organized on black women’s empowerment, human rights defender and politician Marielle Franco and her driver, Anderson Pedro Gomes, were shot dead in Rio de Janiero. Their murders are part of a pattern in Brazil, where at least 70 human rights defenders were killed in 2017.

Evidence suggests the murder was carried out by skilled professionals, and experts said the bullets had belonged to the Federal Police. Brazil is one of the world’s deadliest countries for human rights defenders. Women human rights defenders from marginalized communities like Marielle often face a heightened risk of violence.

Marielle was a young, black, bisexual women human rights defender. Despite the limited opportunities for women in Brazil, Marielle obtained a masters degree in public administration, spent a decade advocating for some of the most marginalized people in her community, and was elected to Rio de Janeiro city council in 2016. “Marielle embodied the rights she stood up for,” says her partner, Monica.