Erlendy Cuero, pictured above testifying to the Inter-American Commission on Human Rights, knows only too well how dangerous it is to speak up for human rights in Colombia. Her brother Bernardo (left), equally vocal in defending the rights of much-targeted Afro-Colombians, was gunned down last June. As Erlendy pressed for the perpetrators to be brought to justice, she received death threats.  Deadly violence is ever present. In April, gunmen shot and killed two of Bernardo's sons.

Such atrocities were supposed to end with the signing of a peace agreement between the Colombian government and insurgents of the Revolutionary Armed Forces of Colombia (FARC). Yet since then, assassinations of community leaders have increased, not decreased. Every 11 days, someone in Colombia is killed for defending human rights. A frequent target are leaders of Indigenous, Afro-descendant and campesino communities seeking to defend their land rights in areas of economic interest. Colombian authorities are failing to protect them and allowing the perpetrators to get away with murder.

Now is a crucial moment to press for action.

On August 7, conservative Ivan Duque took office as Colombia's new president. There are deeply troubling concerns about his opposition to the peace agreement and close links with ex-president Alvaro Uribe, whose term in office was characterized by shocking human rights violations. It is vital that President Duque feels compelled by international pressure to address the ever more dangerous situation for human rights defenders and community leaders, particularly since the toll of killings increased alarmingly over the summer, with no end in sight. As Amnesty stated in a recent report, what lies behind the killings is the desire to silence anyone who speaks out against injustice or challenges powerful interests. This has a ripple effect in the wider community, creating fear and undermining everyone’s rights.

The opinions of Canadians carry weight since Canada is an important commercial partner via the Canada-Colombia Free Trade Agreement and has pledged millions of dollars to peace-building programs in Colombia.

1. Use community events and fall tabling opportunities to gather signatures on our print petition calling on Canada's Foreign Minister Chrystia Freeland to leverage Canada's special status to press Colombia for effective protection to leaders acting on behalf of campesinos, Indigenous peoples, Afro-Colombians and other communities defending territory and natural resources, as well as those championing implementation of peace accords and land restitution processes. Send your petitions in to the address on the right hand side.

2. Command the attention of Colombia's newly-elected president by collecting messages from Canada written on paper peace doves. See the sample below. Remind people to make clear they are writing from Canada and appeal for decisive action. Send all the dove messages to Campaigner Kathy Price, Amnesty International, 1992 Yonge St., 3rd Floor, Toronto, ON M4S 1Z7 She will ensure they are delivered to the new president. 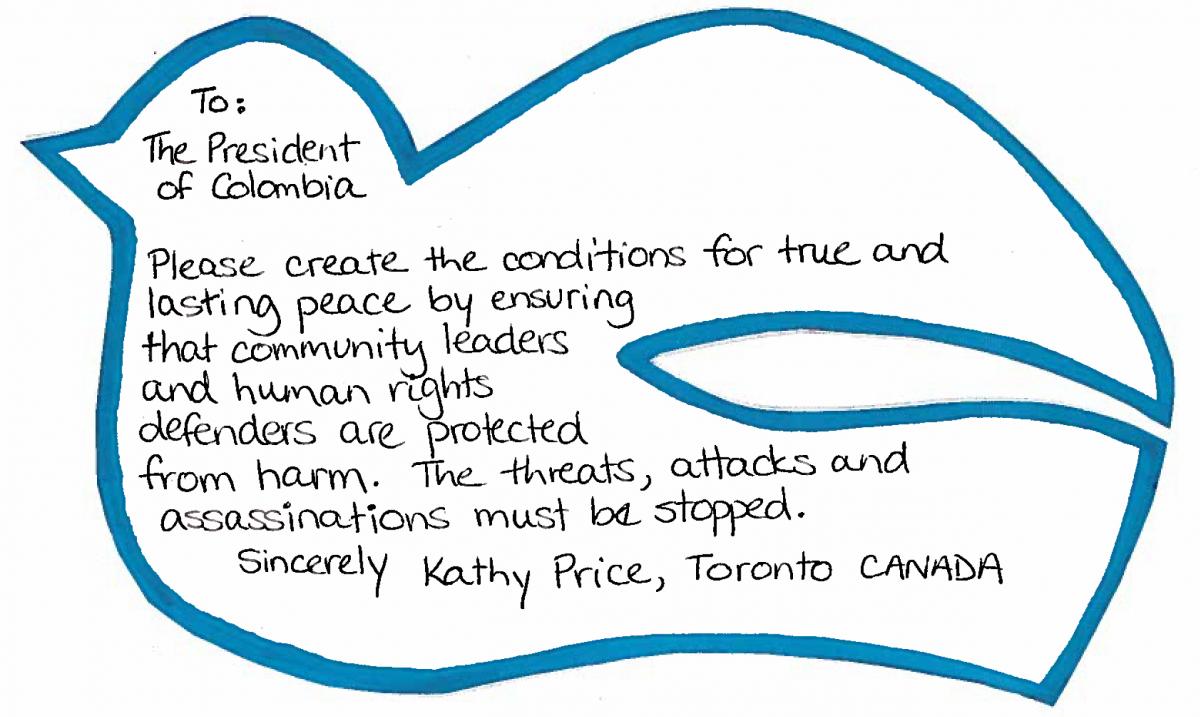 3. Use twitter to make visible concern in Canada to Colombia's new president. Send tweets using the handle of Ivan Duque and the hashtag #UnprotectedPeace. You can also include the handle of Canada's Foreign Affairs Minister Chrystia Freeland. Be sure to signal that you are in Canada. See a sample tweet below.

In Canada, horrified by the ever-growing number of #HumanRightsDefenders killed in #Col, including #Indigenous & Afro-descendant leaders defending their lands & survival. Protecting #HumanRights & those who defend them must be THE priority @IvanDuque @cafreeland #UnprotectedPeace

4. Not on Twitter? Send an email. Use the following address for president-elect Ivan Duque: prensa@ivanduque.com

Read some of our recent expressions of concern about the situation in Colombia:

THANK YOU FOR RAISING YOUR VOICE TO DEFEND HUMAN RIGHTS DEFENDERS UNDER ATTACK IN COLOMBIA!!