People who speak out to defend land, water and forests in Latin America are seeking to protect the human rights and well-being of their communities. Yet, they face unprecedented attacks and killings in return. Indigenous people and racial minorities experience the greatest danger, while women defenders face gender-specific forms of aggression including sexual violence and threats against their children.

It's a terrifying situation, emblemized by the murder of Lenca Indigenous water defender, Berta Cáceres in Honduras. But the killing of Berta is no isolated case. The toll of earth defenders lost to deadly violence continues to grow in Honduras, Guatemala, Mexico, Colombia, Brazil and other countries in Latin America. It's the most deadly region in the world to speak out about irresponsible logging, mining and dam projects that threaten the environment on which so many depend.

Despite the danger, earth defenders and their communities throughout Latin America are not giving up. There is too much on the line. They continue to speak out in defence of environmental human rights and to seek solidarity in countries like ours.

"When Canadians speak up from wherever you are, this is so important," said Bertha Isabel, daughter of Berta Cáceres, when we spoke to her in Honduras.

This summer, take action in solidarity with threatened earth defenders in Latin America, building connections with growing concerns everywhere about the urgent need to protect the earth on which our survival depends.

Visit www.amnesty.ca/earthdefenders to find out more about the crisis for earth defenders in country after country of Latin America. This landing page includes reports, actions and other resources like an inspiring 3-minute video message from the daughters of Berta Cáceres. Book mark this page as we will be updating it with new content as it becomes available. For example, after April 30, we will be adding the story of women earth defenders speaking out about the impact of irresponsible oil development in the Amazon region of Ecuador, following the release of our new report.

During the summer festival season, seek opportunities to engage solidarity action in your community via a display or action table. 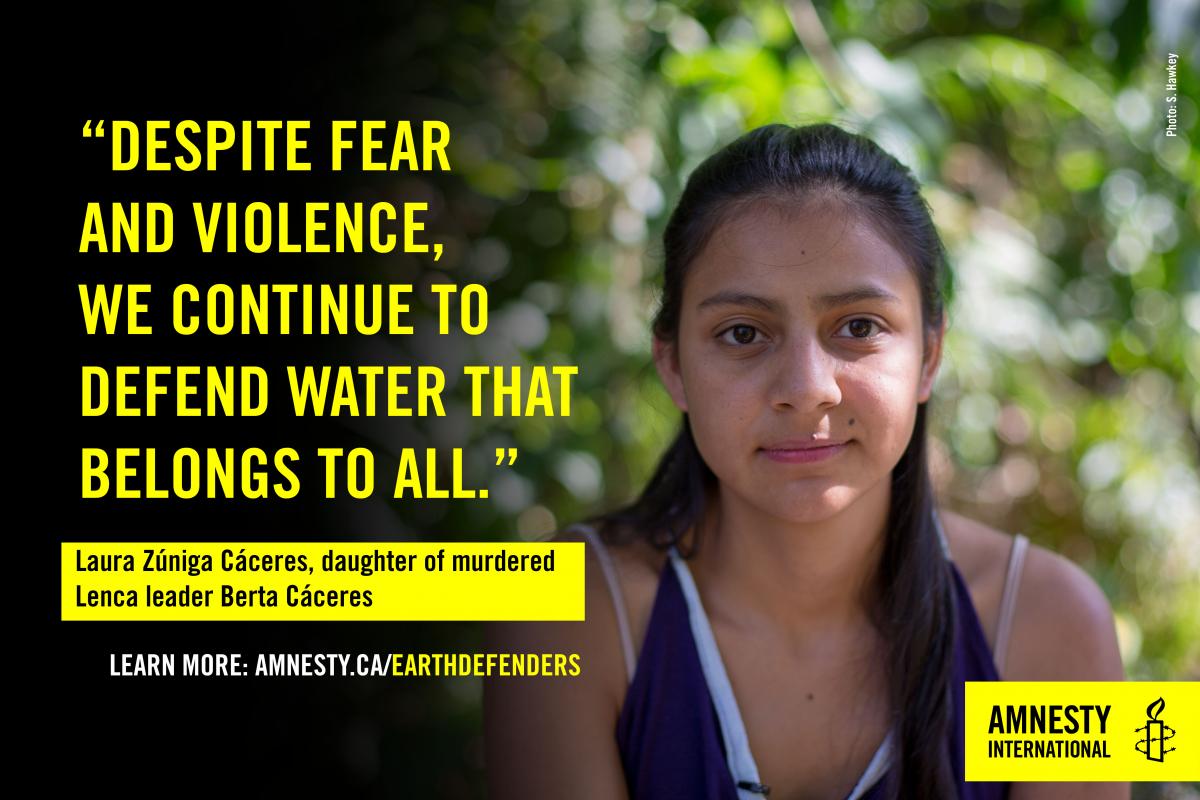 Collect signatures on the print petitions that can be downloaded from the links below:

Be sure to sign our new e-action calling on Canada to be part of the solution, with action to ensure extensive Canadian trade and investment in Latin America does not exacerbate violence or violate the rights of Indigenous peoples and other communities.

Check back in May for an art-in-activism solidarity project that is currently in design.

Got questions, need other display materials, have a great idea you'd like to share for campaigning in solidarity with threatened Earth Defenders in Latin America? Contact Campaigner Kathy Price