It’s been four long years since the Mount Polley copper mine breached its tailings pond, cutting a 9-kilometre path of destruction from the mine site to Quesnel Lake.

In the days following the disaster, long-time area residents and Indigenous peoples mourned together for the many species of trout and salmon, insect and animal that lived along Hazeltine Creek and in Quesnel Lake. 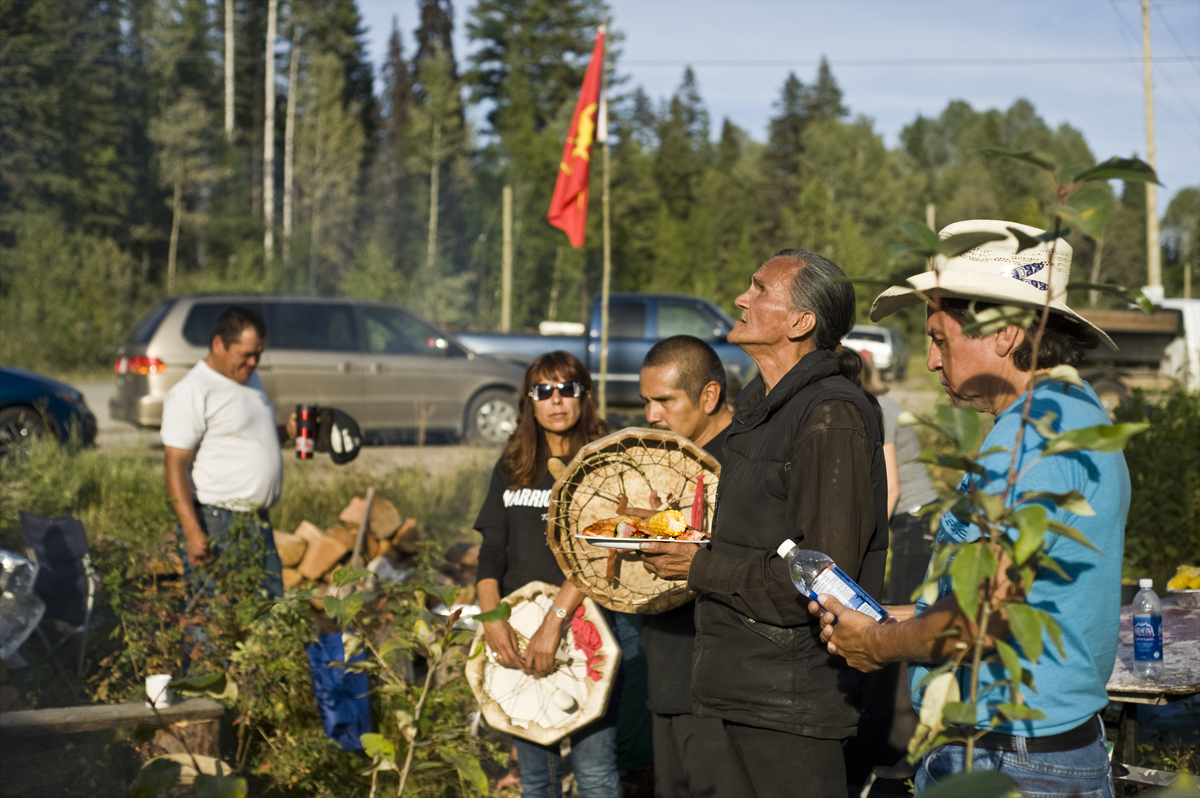 Day 5 of the Yuct Ne Senxiymetkwe Camp, established by Secwepemc women to bring together indigenous and settler commmunities in the wake of the August 2014 disaster. Credit: Kieran Oud

The question on everyone’s lips was, “have we lost our wild salmon and clean water forever?”. People who rely on wild salmon for their survival still don’t know the answer to that question. They want independent studies they can trust to determine that and in the meantime, they don’t want Mount Polley mine to continue discharging mining waste water into Quesnel Lake. 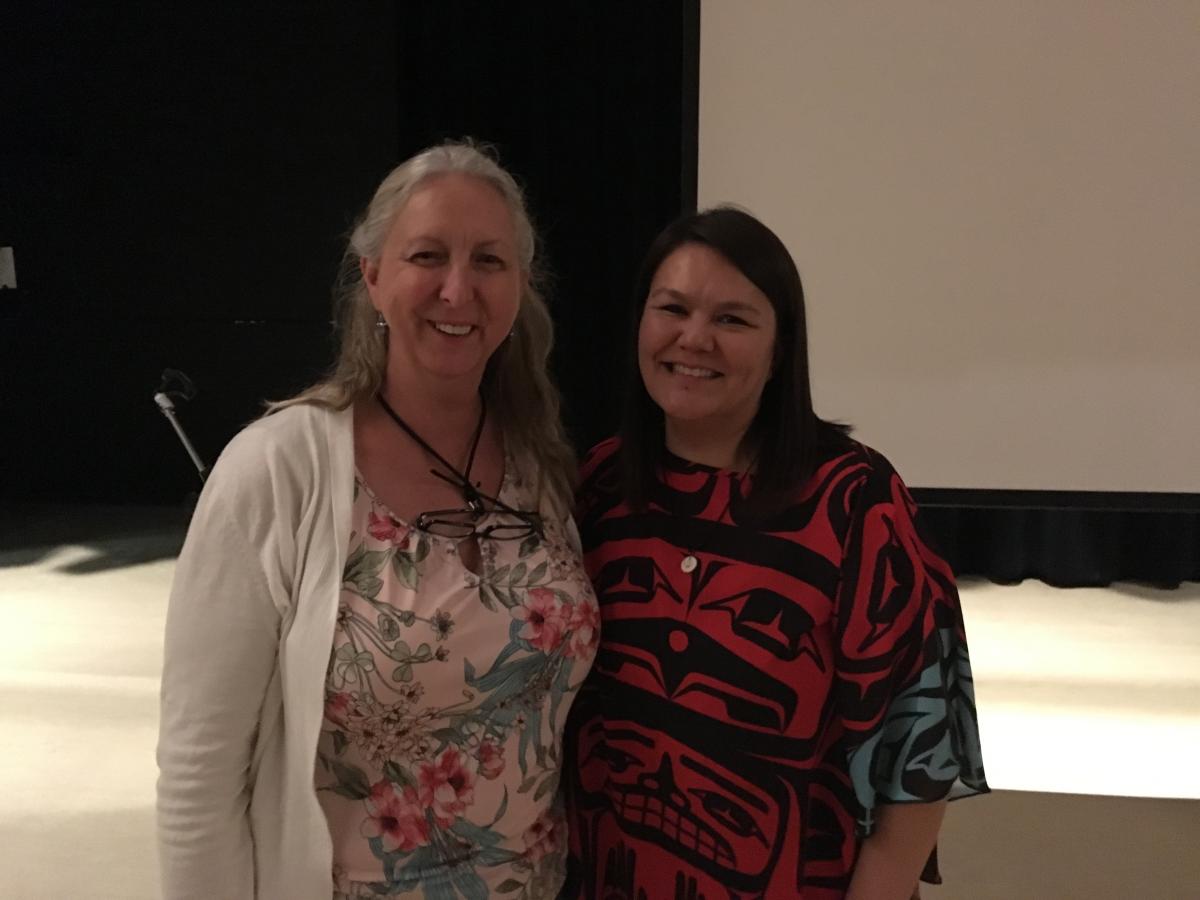 For the last four years, residents and Indigenous peoples have fought together tirelessly for justice. They continue to raise concerns about how the disaster has made them fearful of drinking water or eating fish from the lake. And they want the Federal government to conclude its ongoing criminal investigation into the disaster and to lay charges against those who are responsible. Four years is a long time to wait for justice, and the wait could take longer.

But people aren’t stilling still and waiting for answers. 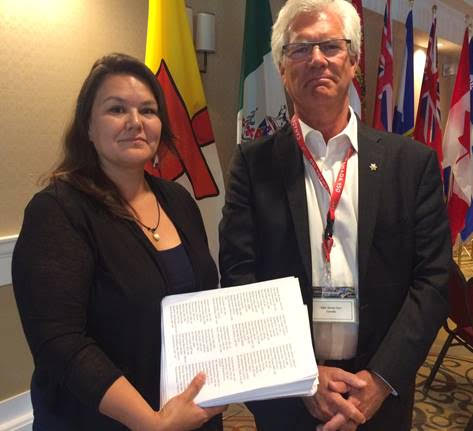 Volunteers groups like the Concerned Citizens of Quesnel Lake pour over government and company data and raise the alarm when problems are found. The Secwepemc Women Warriors have shown up at company annual meetings every year since the disaster demanding Imperial Metals shareholders take responsibility.  First Nations Women Advocating Responsible Mining have penned op-eds about the disaster and lack of accountability, travelled across the country to deliver petitions calling for justice for Mount Polley to the Federal Minister of Energy and Mines, and worked with academics to develop proposals aimed at bringing BC’s mining regulations in line with Canada’s human rights obligations.

Together they opposed Mount Polley’s application for a water discharge permit and condemned the BC government when the permit was granted despite near unanimous opposition. 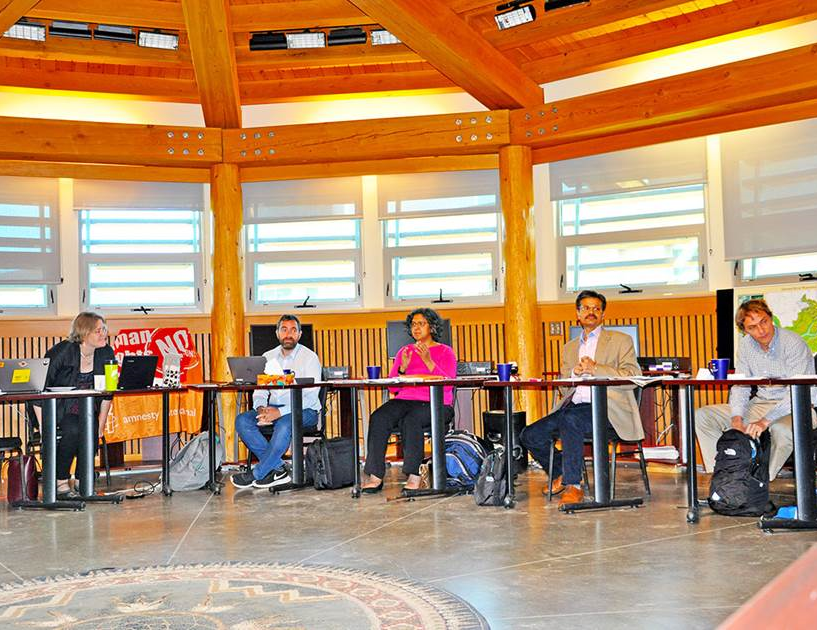 Dozens of people harmed by the Mount Polley tailings dam collapse travelled to Williams Lake, BC in May 2017 to provide testimony to the UN Working Group on Business and Human Rights about the human rights impact of the disaster and to demand justice from Canada. Credit: Williams Lake Tribune

In May 2017, residents and downstream peoples came together to provide testimony to the UN Working Group on Business and Human Rights about the impact of the disaster and Canada’s failure to protect their human rights. The meeting took place in Secwepemc territory, in the city of Williams Lake. 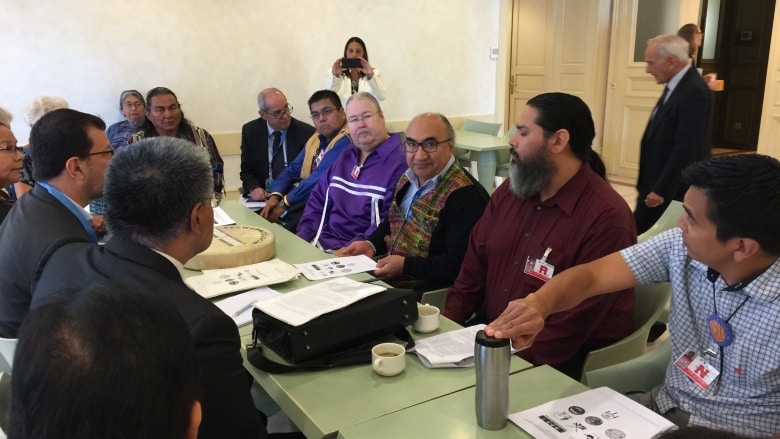 Participants at the UN Committee for the Elimination of Racial Discrimination Meeting in Geneva, Switzerland, August 2017. Credit: Russell Diabo

In August 2017, Indigenous peoples took their concerns about Mount Polley to Geneva to the UN Committee for the Elimination of Racial Discrimination (CERD) during its session on Canada. Amnesty helped prepare a submission to the CERD committee about the human rights impacts of the Mount Polley disaster based on the testimonies given at May UN Working Group meeting in Williams Lake.

Both of these highly respected international bodies subsequently called on Canada to hold those responsible for the breach to account and to provide health monitoring, transparency, and food security to those who were harmed. More broadly, it called on Canada to implement the UN Declaration on the Rights of Indigenous Peoples without further delay.

To our great disappointment, the Province has yet to publicly acknowledge the UN recommendations.

The Federal government has also remained silent. Given Canada’s role as a global exporter of mining investment, Canada’s reluctance to provide justice for the worst environmental mining disaster in Canada’s history is mind-boggling and shows how far Canada has to go to live up to its own much-hyped reputation as a global corporate accountability leader. 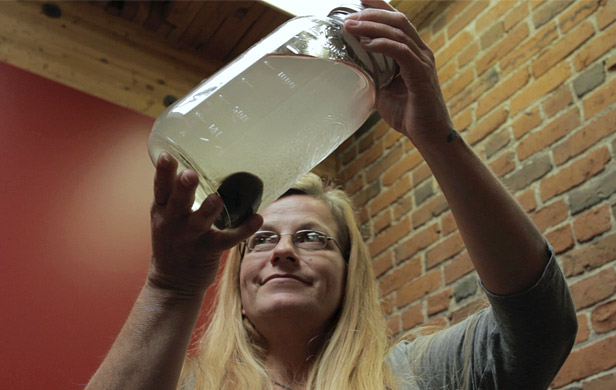 This week, as the fourth anniversary approaches, I’m reminded of the personal toll the Mount Polley mine disaster has taken on people who lived through it. Lawna Kuester (pictured above) and her husband, Larry, a former mine worker, spoke out publicly in the months after the disaster and campaigned tirelessly for justice. They took a lot of flak for speaking out. They eventually sold their home at a loss and moved away from Likely. But the anguish of living through the disaster stays with them. “For us, it was a horrible thing to happen in our lives. The disaster divided a community and things will never be the same. I would still like to see them held accountable for what they did to everyone,” says Lawna.

That feeling is echoed by the BC public who were shocked when the disaster happened. People continue  to tell me how appalled they are that no one has been held accountable for Mount Polley. 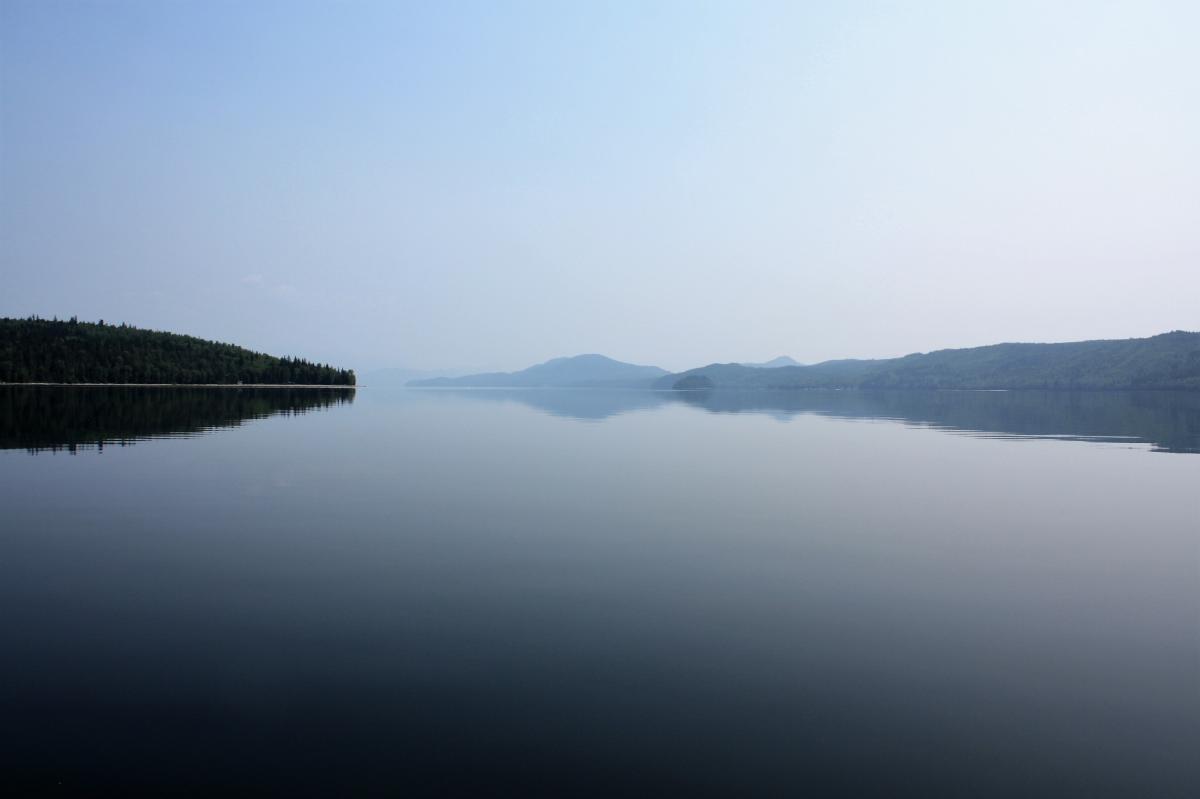 Quesnel Lake is not only vital to Indigenous food security, it is a beautiful place that draws thousands of visitors every year. Horsefly Narrows, July 2018. Credit: Concerned Citizens of Quesnel Lake

On the eve of the fourth anniversary of the disaster, Amnesty International reiterates our solidarity with residents and Indigenous peoples calling for justice for the Mount Polley mine disaster. We are calling on the government of Canada to: 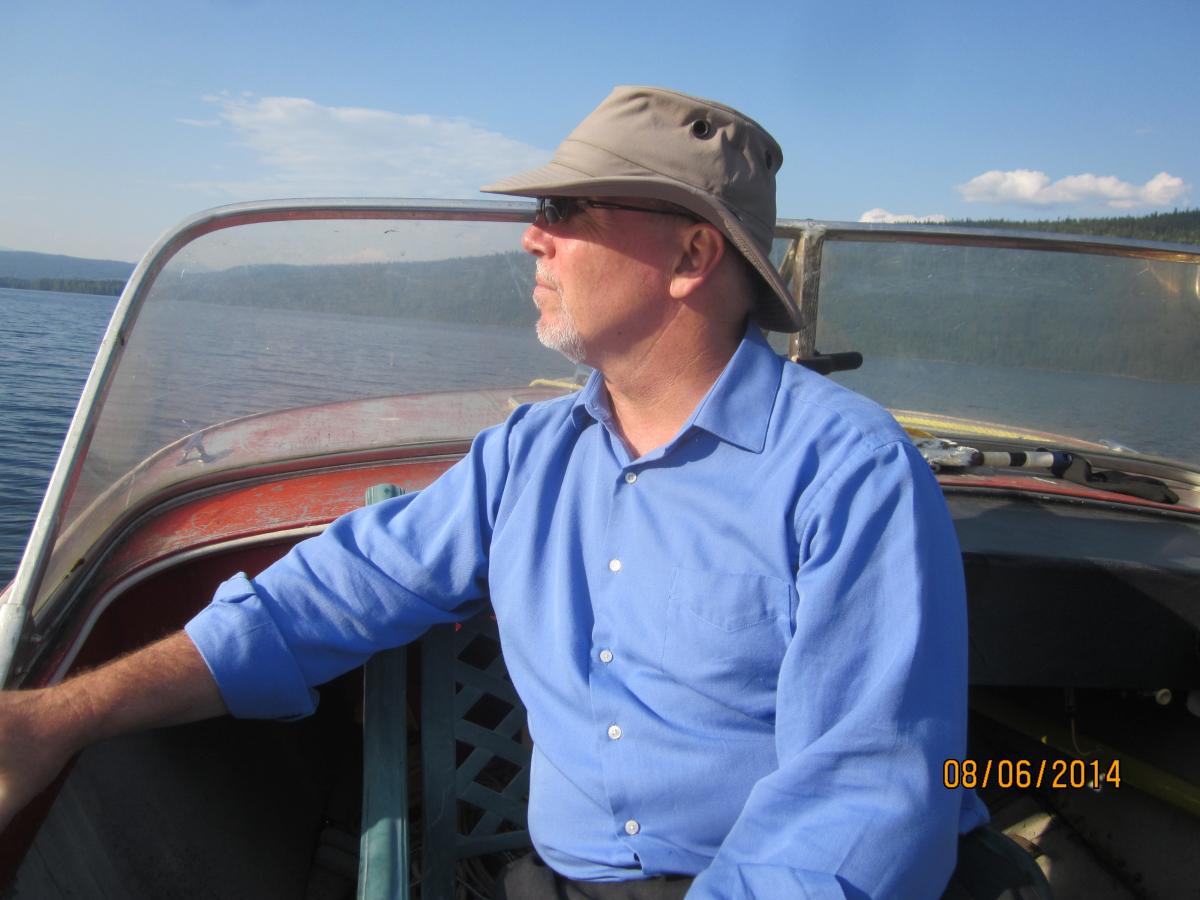 Before he became BC's Premier, as leader of the BC NDP, John Horgan visited the scene of the disaster and spoke out in support of those harmed, August 2014. Credit: Richard Holmes

We are also calling on British Columbia to show leadership and: 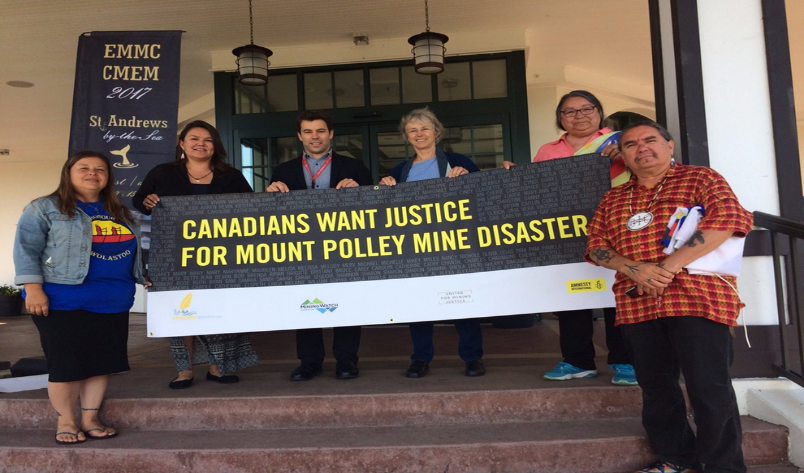 >>> Show your love and solidarity by sending a message of support on a cut-out of a wild, BC salmon

Call on Canada to ensure the rights of Indigenous peoples are respected in the context of resource development.
Take Action