After almost a decade of campaigning, Ali al-Nimr is finally free.

Ali al-Nimr was just 17-years-old when he was arrested in 2012 for participating in anti-government protests in Saudi Arabia’s Eastern Province. Two of his friends, Abdullah al-Zaher, aged 16, and Dawood al-Marhoon, aged 17, were also arrested separately. All three young men were sentenced to death by the Specialized Criminal Court (SCC) in 2014 after grossly unfair trials based on so-called ‘confessions’ extracted through torture.

More than 21,000 Amnesty supporters from Canada took part in the global campaign to save their lives, calling on Saudi authorities to quash the death sentences and protect the rights to freedom of expression and association. Social media played a key role in a solidarity work and raising awareness around Ali al-Nimr’s case in a region where state-controlled media and anti-terror laws are exploited to suppress dissent.

In April 2020, Saudi Arabia issued a Royal Order announcing plans to end its use of the death penalty for people under the age of 18 in discretionary cases not involving the counter-terror law. Four months later, Saudi Arabia’s public prosecutor ordered a review of the death sentences in the cases of Ali al-Nimr, Abdullah al-Zaher and Dawood al-Marhoon. In February 2021, the SCC commuted their death sentences and re-sentenced them to 10-year prison terms inclusive of time served.

Ali was finally released on October 27, 2021. Abdullah was released just this week, and it is hoped that Dawood will also be released soon at the end of his sentence.

Thank you to everyone who spoke out for Ali, Abdullah, Dawood and for others facing the death penalty in Saudi Arabia. Ali’s lawyer also shared his thanks: 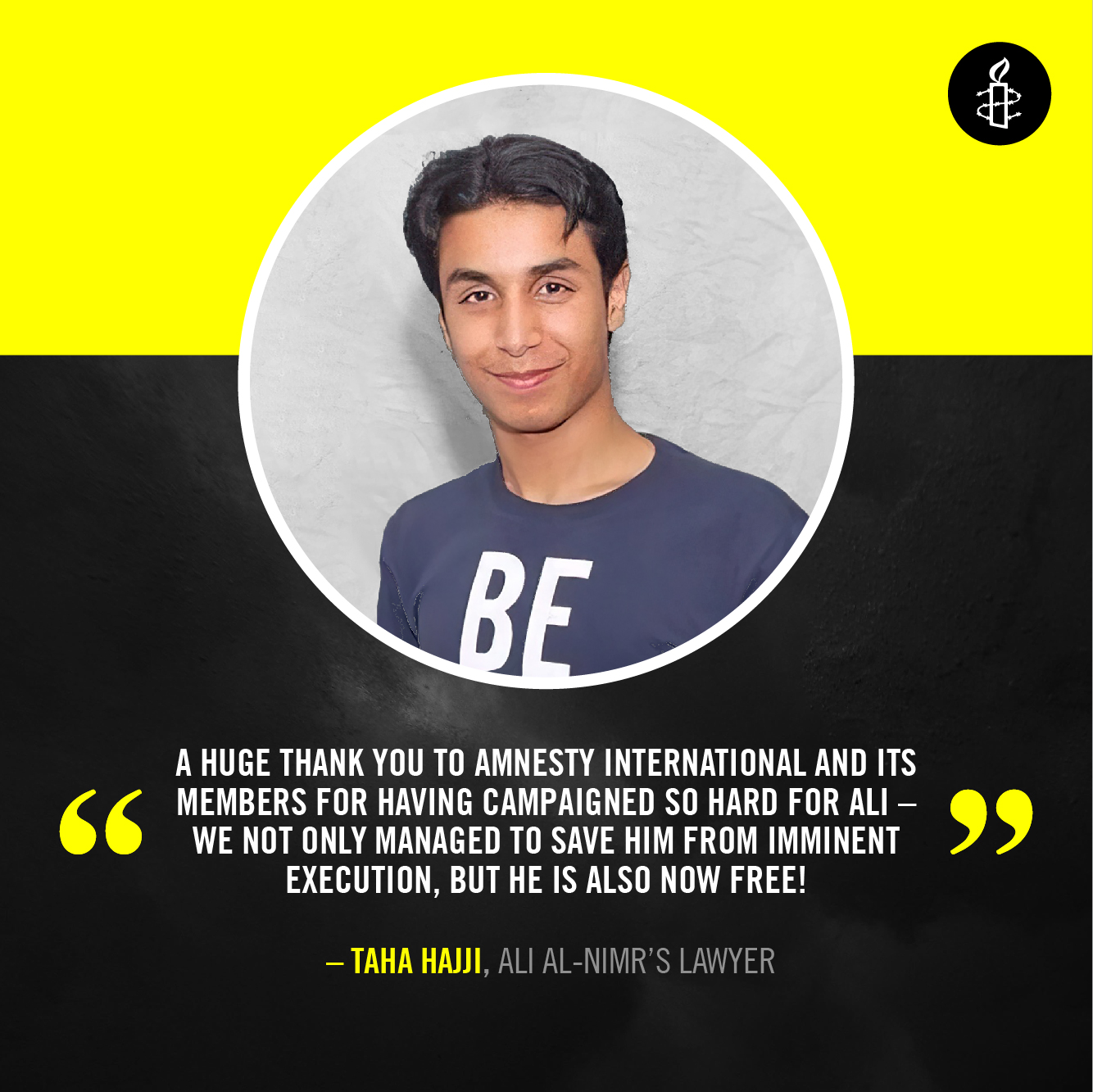 In 2011, Saudi authorities engaged in a vicious crackdown on the country’s Shi’a Muslim minority in response to protests demanding greater rights and reforms as well as the release of detainees held without charge. Some twenty people were killed by security forces and hundreds more arrested in the Eastern Province. While most were subsequently released, the rest were detained without charge or trial for a year or more, and then charged and brought to trial before the SCC. Dozens of those convicted and sentenced to death were later executed, sparking further protests. Among those executed in 2016 was Ali al-Nimr’s uncle, the prominent and outspoken Shi’a cleric, Sheikh Nimr Baqir al-Nimr, who had been sentenced to death by the SCC on October 15, 2014.