Emma Jayne Geraghty works for Amnesty International Canada in Toronto. She was one of thousands of Irish ex-pats who traveled home to Ireland to vote in the historic referendum on whether to repeal the eighth amendment of the constitution, which bans abortion. On May 25th Ireland voted overwhelmingly to repeal the eighth amendment, paving the way for safe and legal abortion services in Ireland. Learn more>>

There’s a strong Irish community across Canada and particularly in Toronto. Over the past year that I’ve been in Toronto we have come together to take action, show solidarity, and to fundraise for the Together for Yes Campaign. We are a funny group that didn’t really know one another outside of this campaign, and yet the bond that connects us now runs so deep. We came together around a shared belief that women can and should be trusted to make decisions that affect their lives and bodies and that women should have access to safe, legal, and compassionate healthcare in Ireland.

Most people in the Irish in Toronto Together for Yes group had been residing outside Ireland for more than 18 months and were ineligible to vote in the May 25 referendum on abortion rights. But that didn’t stop them coming out to show their solidarity and support! 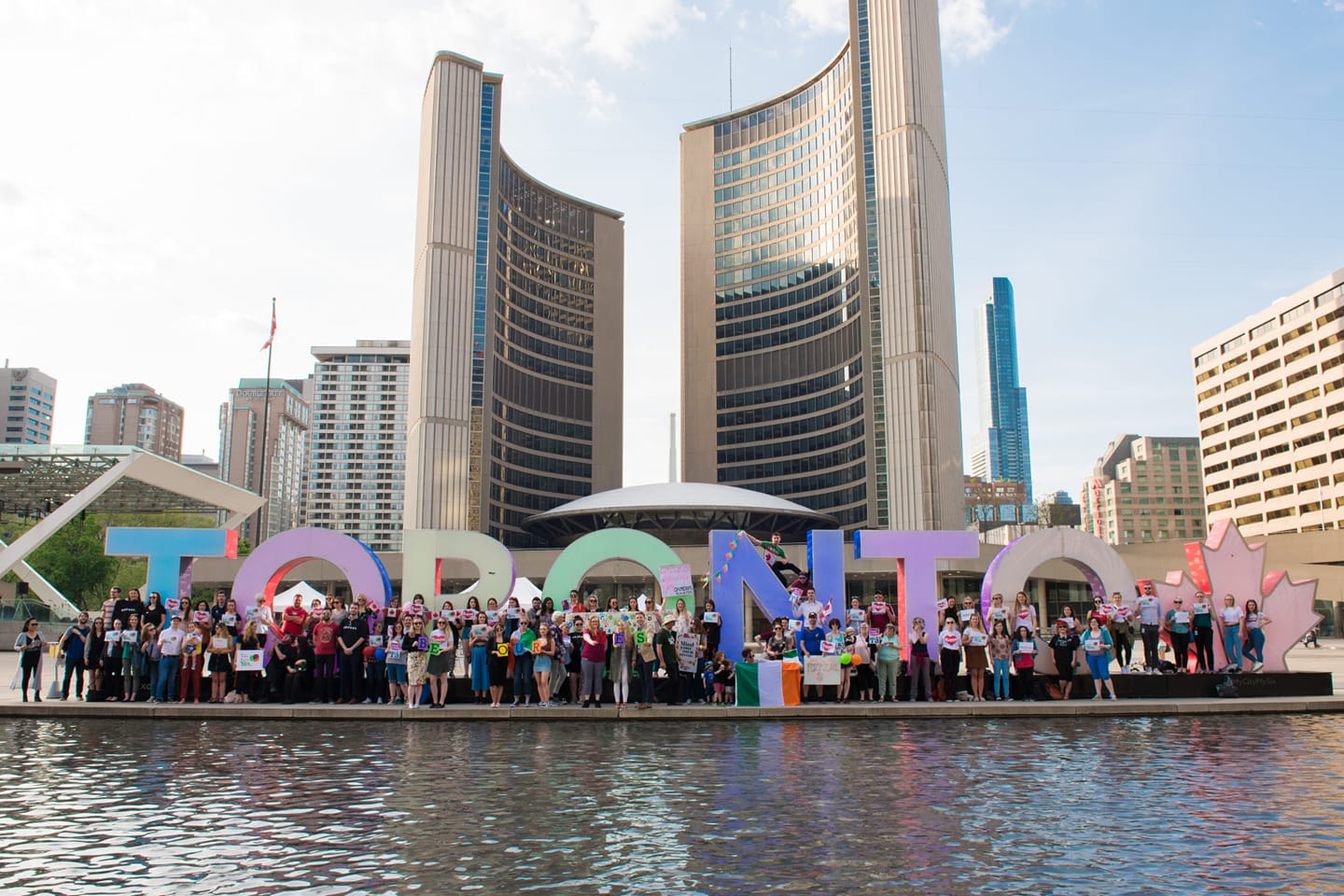 Being able to choose to travel home to vote in this historic referendum meant the world to me and to so many others as is evidenced through the masses of people who traveled #HomeToVote. It was touching to see crowdfunding initiatives pop up to fund those who were eligible to vote but who couldn’t afford the travel to get home.

Sad reflection as i wait to board my flight #HomeToVote - the cost of my travel from #Toronto was less than my travel costs to the UK when I needed to access safe abortion services. #together4yes #Repealthe8th

As I started my journey home it was it was sad to realise that my travel costs home to vote was less than what I had to pay when I was forced to travel to the UK to access safe abortion services many years ago. 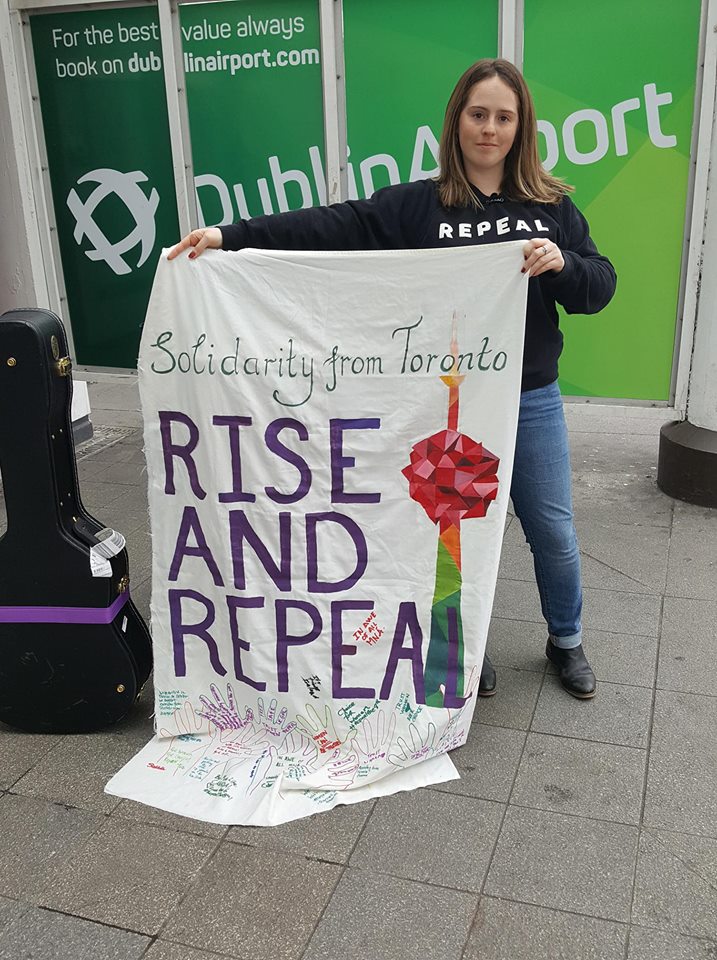 Photo: Arriving in Dublin airport carrying the support and solidarity from the Irish community in Toronto with me.

I spent the week I was home with family and friends speaking about the referendum and our shared hopes and fears around the possible outcomes. We spoke about the frightening current reality for women living in Ireland following the recent #IBelieveHer Belfast rape trial, the murder of 14 year old Anastasia Kriegel, and the abduction and murder of 24-year-old Jastine Valdez. The days leading up to the vote were filled with anguish and anxiety. I kept hearing from friends how the messages coming through the #HomeToVote hashtag was getting them through the last days and weeks - providing hope and solidarity from people from all corners of the world coming home to vote yes.

Repeal groups were set up across multiple countries and support and solidarity was pouring in from multiple channels. I was told on more than one occasion while I was home that it was this international solidarity that provided the necessary hope for those who were on the ground canvassing across Ireland, who were really feeling the divisiveness of the anti-choice campaign in the final weeks before the referendum. 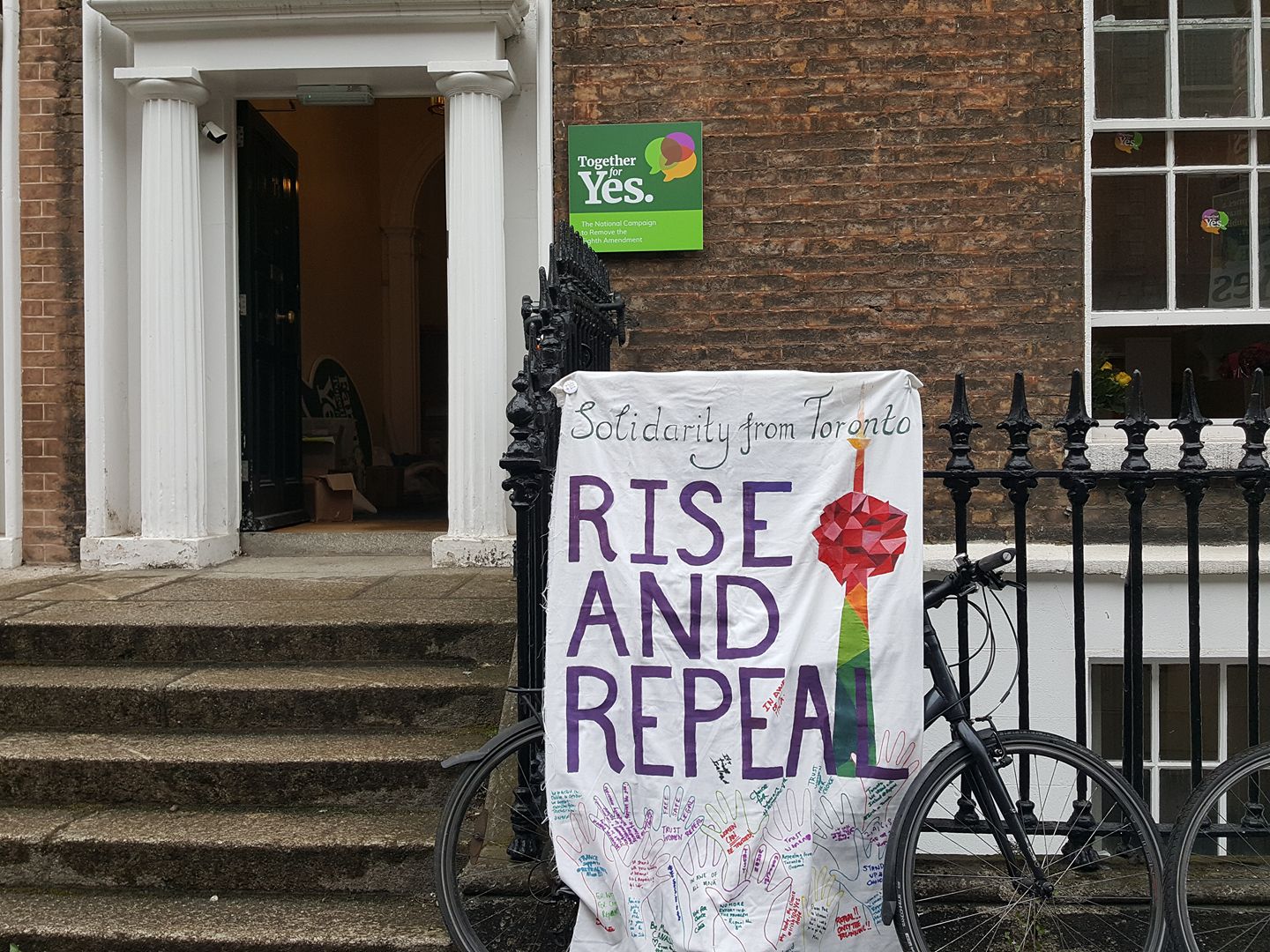 I woke up early on the day of the vote and had a hearty breakfast with my mum. We went over to vote together before she had to leave for work. As I placed my X in the yes box, I thought about all the women in Ireland who have suffered because of the 8th amendment. I left the polling station filled with hope and at the same time was trying to prepare myself in case the final decision went the other way. I didn’t want to let myself believe the Irish Times exit polls that night which suggested it would be a landslide for repeal.

I stayed at home to watch the live coverage of the voting updates as they came in. I spent the day taking deep breaths trying to hold back the tears. As final tallies came in with a resounding yes I felt elated and in a state of pure disbelief. I was filled with an overwhelming sense of triumph and liberation and yet there was a simultaneous numbness and complete emptiness. These feelings were coupled with a  sense of release - a letting go of all the grief that had been held in that had previously been fueling the struggle to get to this point.

As a young student I was working on an art project based on the last Magdalene laundry to close on Sean McDermott St. and was really getting immersed in the history of women’s oppression in Ireland. I remember joining public meetings and listening to Ailbhe Smith talk about the history of the X case and calling for us to stand with women and to trust them with decisions over their own bodies. She captivated me - and many others, we knew that this wasn’t going to change unless we got up and did something about about it. This was my entry point into activism.

I began joining demonstrations, mobilizations, and marches in Dublin city centre - where I met and learned from other women who shared the same concerns and values as me. I was constantly creating new banners and placards to bring with me. I later worked with friends to set up a feminist society on campus and we were using this space to inform and challenge one another and ourselves. 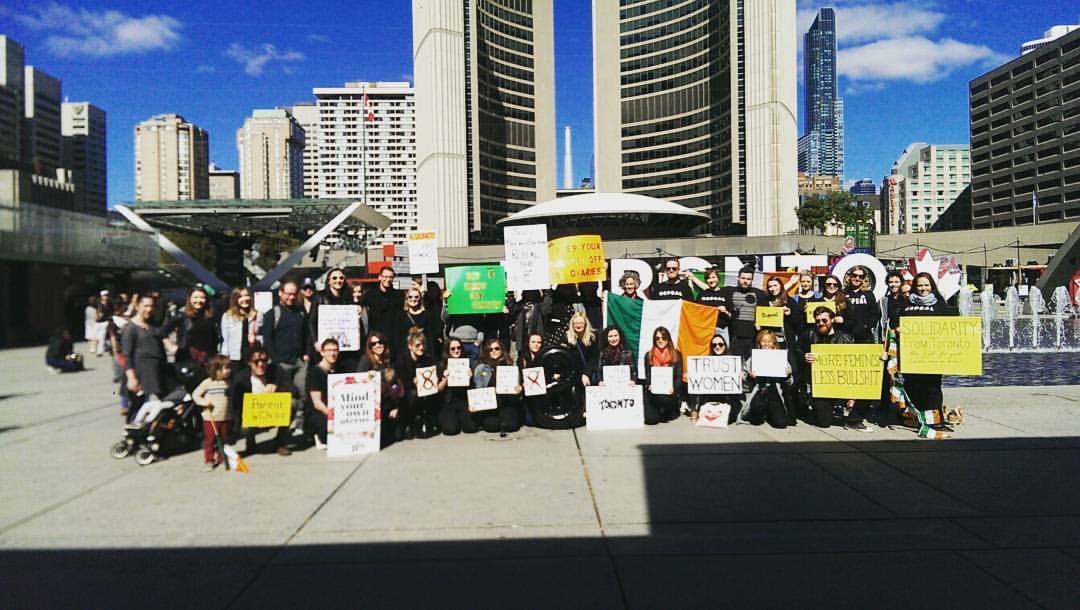 Photo: Irish in Toronto solidarity action for the march for choice 2017.

I was learning all the time more and more about the stats and facts of women traveling to the UK to access abortion services, and had become an advocate for change starting discussions in my family and circles of friends. Little did I know that I would soon find myself in the unimaginable situation of being in a crisis pregnancy and forced to travel to the UK to access safe abortion services myself.

The word alone doesn't quite capture the depths of isolation that crept in. I felt like a criminal walking up the street towards the Marie Stopes clinic to get some crisis pregnancy information. My mind was filled with what if’s, and's and maybes. All of a sudden I was accosted by a woman and a man, it took me a few moments to realise what was happening. I found myself halfway down the street after they linked my arms and pulled me away from the clinic. They had placed a small plastic baby in my hands and told me they wanted me to meet their friend in a nearby cafe. Their friend who had an abortion and regretted it. I was caught off guard. I tried to say I had an appointment and needed to leave, but as I started to walk away they called me a murderer as their two other friends stood praying at me with their rosary beads.

My head was pounding with an unparalleled headache from the lack of sleep and the constant thinking and going over all the potential possibilities. Unlike many other women in Ireland, I had the means to travel to the UK to access safe abortion services. Although despite being able to afford it, you still feel the absolute shame of being forced to leave. My mum came with me to support me knowing that this was the single most difficult decision I ever had to make. I never scheduled any appointments for after care services when I got home because of the previous intimidating experience I had with anti-choice people calling me a murderer.

When I heard the news about the death of Savita Halappanavar I had this very heavy and unsettling feeling in the pit of my stomach. I remember the absolute silence of the massive crowds that gathered on the streets outside the Dail. We gathered for vigils for weeks in the cold - there was a strong collective grieving process happening and I remember looking around me at faces wet with tears, filled with frustration, disbelief and anger with a system that would not not value the health and life of this woman - of women in Ireland. Savita had ignited a fire in the hearts of many people. There was hope to be found in fighting for her legacy. 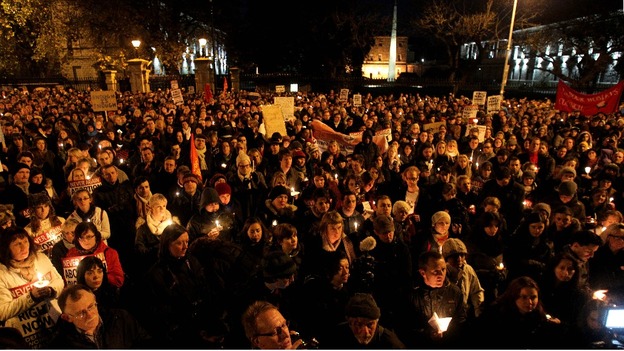 Photo: Protesters hold a vigil in Dublin after the death of Savita Halappanavar who was refused an abortion Credit: Press Association

As I waited in the airport for my flight back to Toronto I felt like we had finally managed to fight for  the first step towards a more compassionate Ireland - for Savita, for all women and trans men across the country. I hope we can continue to join the dots of systemic violence and oppression women are facing. 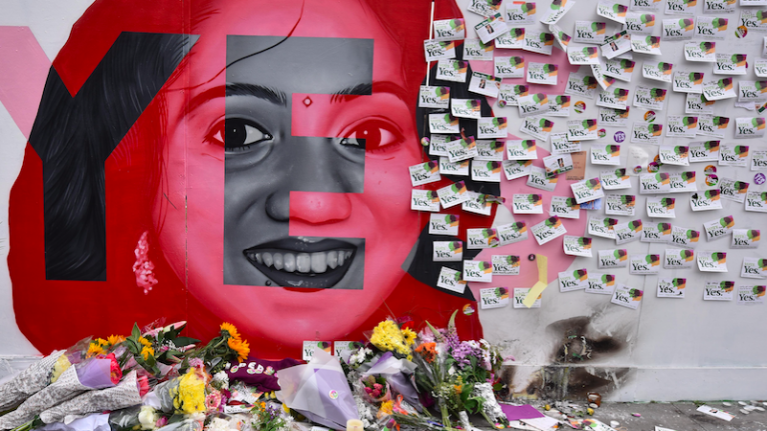 Photo: People are leaving flowers and heartbreaking messages at the mural of Savita in Dublin - via her.ie