He shouldn’t be there. He should be at home in Canada, taking walks in the country, enjoying meals with friends, working as a web programmer, or creating new pieces of art. Unfortunately, instead he has been caught up in a web of madness which the Iranian authorities are so adept at spinning. Saeed has been sentenced to life for creating an open source web program which was used by others to upload pornographic images to the internet. The evidence used against him may well have been extracted under torture.

On Friday, February 3, a large crowd of people who care about human rights in Iran, including several prominent former prisoners Amnesty International has helped to free, came together in Toronto to voice their support for Saeed and call for his return to Canada. Amnesty International supported the event. You can see more photos here. 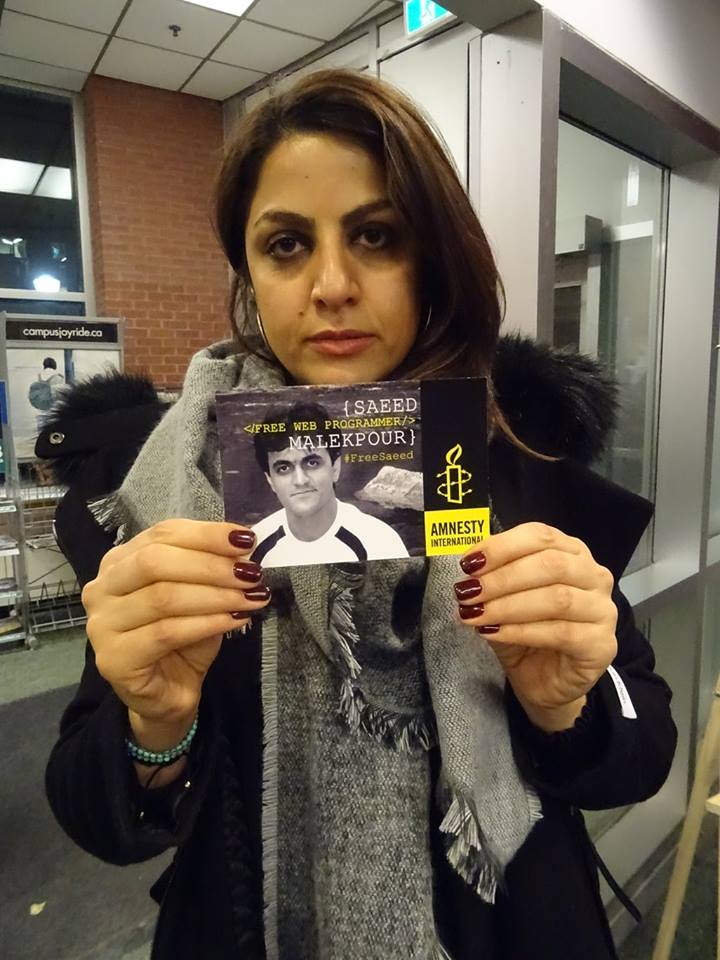 Saeed’s sister Maryam Malekpour spoke passionately about the gentle brother she loves and her desire to be reunited with him. But it is more than just his family who care about him. Those who have met Saeed in Evin prison have also been touched by his gentle spirit are committed to working for his release. Watch a video of Maryam's speech. 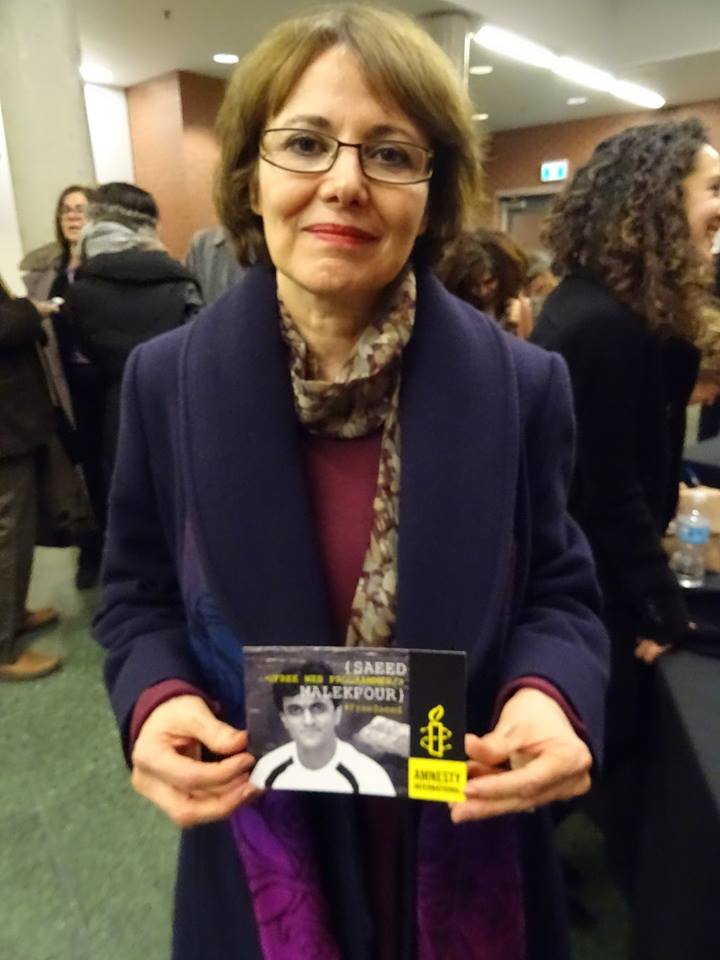 Dr. Homa Hoodfar, just released from Evin prison in September 2016, reminded the crowd of the importance of advocacy. While imprisoned, Homa never had news from outside Iran. However during her detention she knew that something was happening because of improvements in the conditions of her imprisonment, and this gave her hope. She emphasized that our public solidarity actions and letters to Iranian authorities demanding Saeed’s release do make a difference, and urged us to never give up. 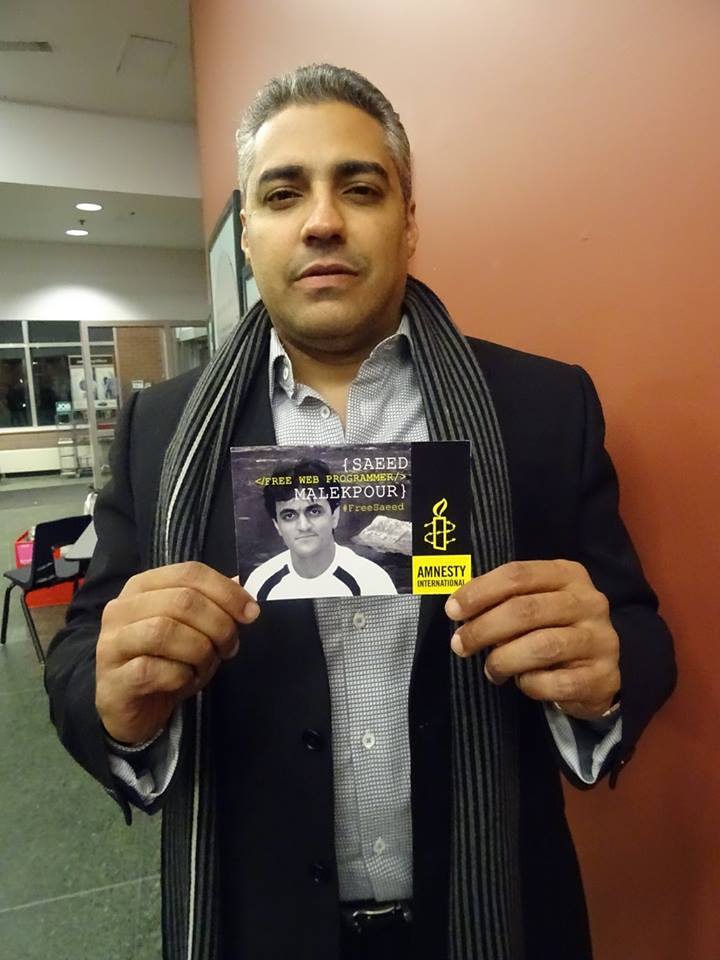 In his words to the crowd, Egyptian-Canadian journalist and former prisoner of conscience Mohamed Fahmy stressed how important it is to put a human face on the prisoner. Saeed is not just a number -- he is a man who is loved by his family and friends, a man of many talents. The more effective we can be in humanizing his story, the better we are able to compel people and our government to take action on his behalf, he reminded us.

A year ago, Mohamed and Amnesty International released the Protection Charter, a proposal for more effective action to defend the rights of Canadians imprisoned abroad. 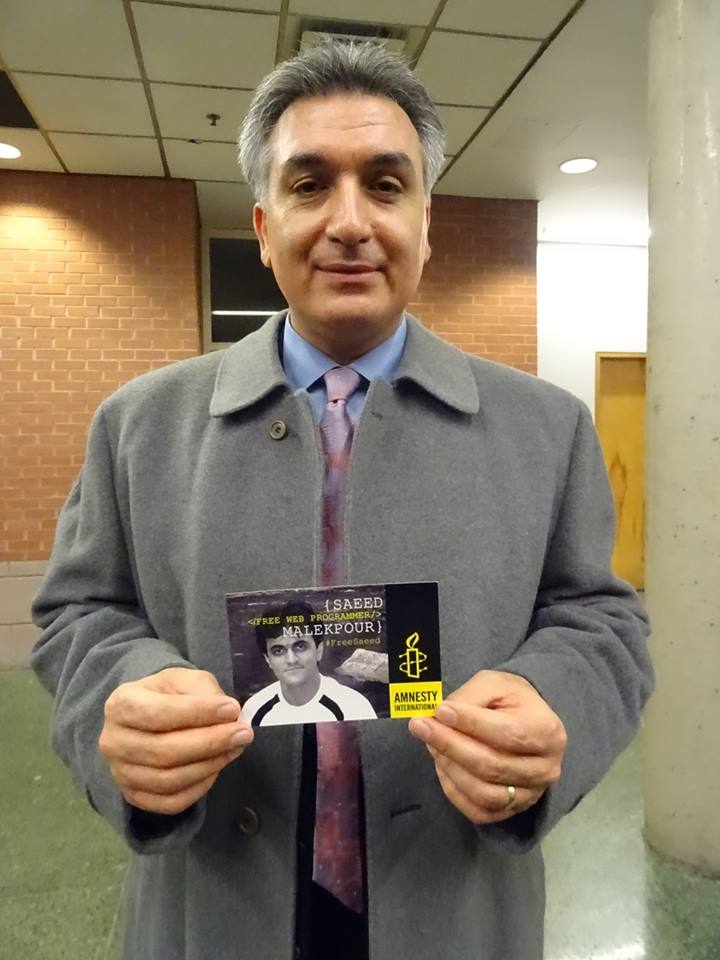 When Hamid Ghassami Shall returned to Canada after spending five years in Evin prison, he thanked Amnesty International for all we had done to work towards his release; then made it clear that he will do everything he can do to help Amnesty work towards the release of Saeed. Hamid reminded us again that our action for Saeed does not go unnoticed, and a release from prison for Saeed is still possible. 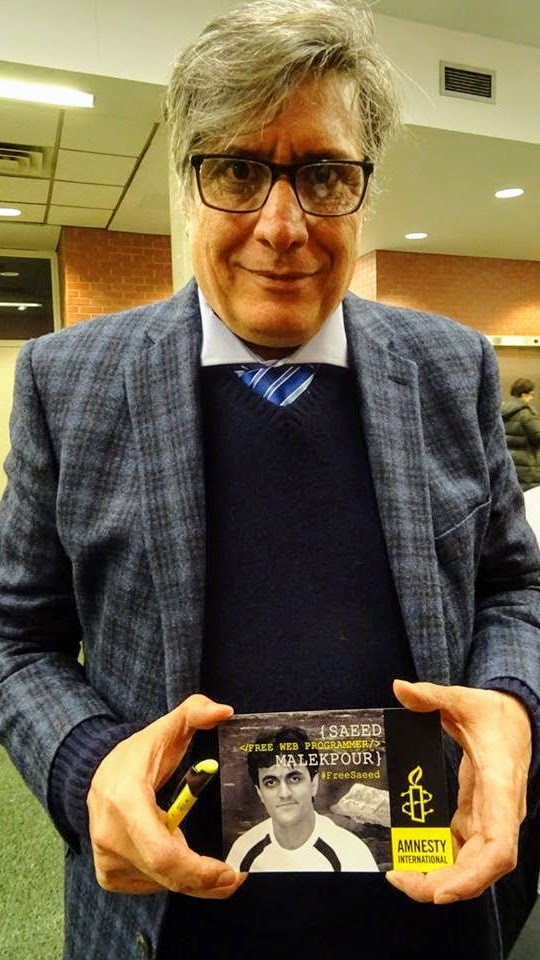 Mostafa Azizi, another permanent resident of Canada detained in Evin prison for more than a year and released in April 2016, shared a cell with Saeed. He told the crowd about Saeed’s gentle and caring nature. Saeed helped an African detainee translate some of his legal documents and discovered that the gentleman should have been released two years earlier. The man was released because of Saeed’s help.

Saeed was sentenced to life in prison, plus 8-1/2 years (it can only happen in Iran!). Mostafa told the crowd how, one day, Saeed appeared in the cell block after a visit with the authorities with a big smile on his face. When asked if he was being released from prison Saeed responded, "No, but my sentence has been reduced by 8 ½ years!” 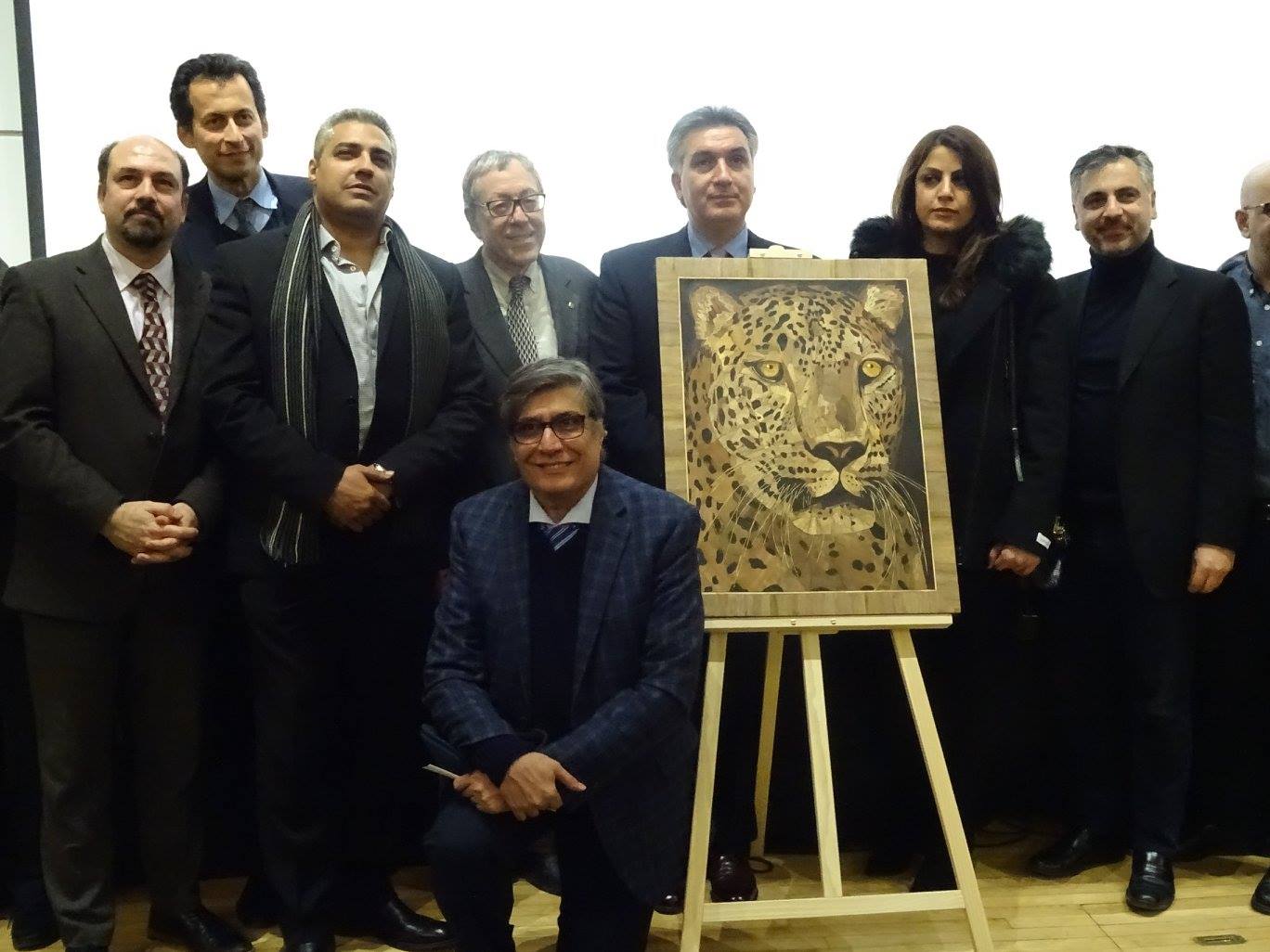 Finally and most movingly, we discovered that Saeed has not given up hope. The crowd was presented with a work of art which Saeed created while in prison -- the head of a leopard gazing out at the crowd with strength and defiance. The artwork tells us that Saeed has not yet been broken or lost all hope. Even from the depths of Evin prison he has been is able to create something inspiring and beautiful. 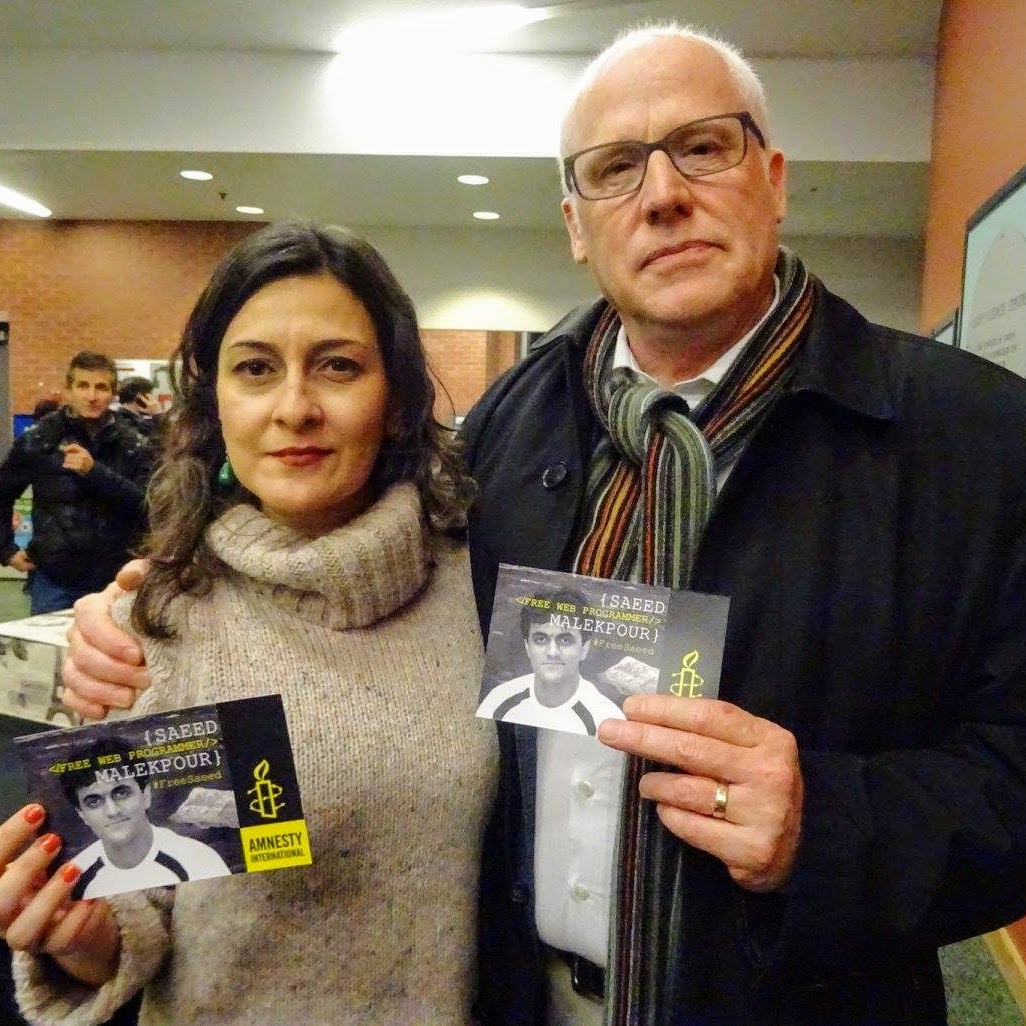 We too must be defiant and not give up on Saeed Malekpour. Our actions do make a difference and can inspire hope and resilience for those who remain detained. Take action now and demand that Saeed be set free!

Saaed Malekpour is a Canadian resident who has been has been tortured and imprisoned for life, for developing a software that uploads photos to to the internet.
Take Action