It was a killing that could and should have been prevented.

The Inter-American Commission on Human Rights recognized the risks and called on the Honduran government to provide protection measures.

Yet Berta was gunned down on March 3 in her home in La Esperanza, ironically Spanish for “hope”.

The pain of losing such a vital, beloved leader was quickly followed by fear. Berta’s tireless efforts had won her the prestigious 2015 Goldman Environmental Prize.

If someone as celebrated and well-connected as Berta could be murdered at will, then what about others less well-known?

The answer came days later. Community leader Nelson García was shot in the face and killed as he returned from helping victims of a land eviction.

Fear is ever-present amidst the repression, corruption, gaping inequality and lawlessness that is Honduras. According to a 2015 report by the organization Global Witness, the Central American country, once known as a banana republic but now attracting Canadian resource extraction companies, has become the most dangerous place per capita to be a land or environmental defender. 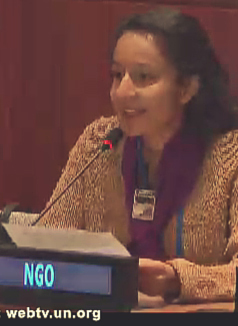 In the midst of such danger, there is determination and enormous courage. Berta had sent her daughters to safe haven outside Honduras because of threats they would be raped and killed.

In the wake of their mother’s assassination, her daughters returned and are speaking out wherever they can, as she did, with dignity, strength and inspiring eloquence, despite the risks.

The photo on this page shows Berta’s daughter Bertita addressing delegates at the UN General Assembly in New York. 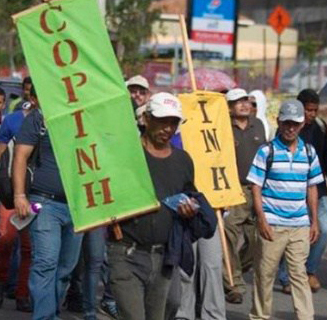 Other members of Berta’s family and the organization she led, the Civic Council of Popular and Indigenous Organizations of Honduras (COPINH), are also in grave danger as they call, like Berta had, for a stop to development projects that undermine their human rights. The reports are ominous; death threats, surveillance, the hovering presence of unidentified armed men and cars without licence plates.

Late last week, a Canadian delegation of Indigenous leaders and human rights advocates were amidst a peaceful gathering of COPINH supporters when they were threatened and attacked by dozens of armed men, as police looked on but did nothing. At least eight people were injured in the attack.

The police finally escorted COPINH members out of the area after the international witnesses convinced them to react (for more details see our Urgent Action).

Amnesty International is working with the delegation to make visible in Canada the realities they witnessed in Honduras, realities that we continue to document and denounce. Indeed, if anything positive is to come out of this horrendous situation it will only be if it serves as a wake-up call to the international community – and that means all of us.

The killing of Berta Cáceres was allowed to happen. We must now raise our voices to protect the lives of other defenders in Honduras, who are courageously stepping forward to work for a world of rights and justice for all.