On Saturday May 27th, the inspirational Indigenous rights movement in Canada and global music artist and activist Alicia Keys were honoured with the 2017 Amnesty International Ambassador of Conscience Award at an evening ceremony in Montreal.

The award is the organization’s highest honour for human rights work. This is the first time the award was given to a Canadian recipient and held in Canada.

“Amnesty International’s Ambassador of Conscience awardees this year stand in the tradition of past winners such as Vaclav Havel and Malala Yousafzai – people who have shown exceptional leadership and courage to champion human rights, often in the face of great difficulty,” said Salil Shetty, Secretary General of Amnesty International.

Accepting the award recognizing the Indigenous rights movement of Canada were activists Delilah Saunders, Melanie Morrison, Melissa Mollen Dupuis and Widia Larivière. Words from the two other award recipients who were unable to attend, Cindy Blackstock and Senator Murray Sinclair, were read by actress Tantoo Cardinal, who gave a speech to honour the courage and determination of activists from across the movement in their fight to end discrimination and ensure the well-being of Indigenous communities.

In solidarity with the Indigenous rights movement, Amnesty International launched a petition urging the Minister of Justice to fulfil Canada’s promise to uphold the UN Declaration on the Rights of Indigenous Peoples.

The ceremony featured stunning performances from several artists including Elisapie, Helen Knott, Cris Derksen, Gasandji from the Democratic Republic of the Congo, Patrick Watson and Safia Nolan. Renowned activist and former leader of the Black Panthers Party, Ericka Huggins, presented Alicia Keys with her award and praised her for using her platform to fight for the marginalized and encourage young people to raise their voices.

Upon accepting the award Alicia Keys delivered an impassioned speech calling on people to stand up for human rights: “Can we depend on each other to speak up any way we can? Because who do we count on to support the fight for freedom, the promise of dignity and equality, if not us?”

The awards ceremony capped off #RightsCity Montreal, two days of human rights celebration, conversation and action, including a human rights conference and the annual March for Humanity and the Prevention of Genocide, in partnership with the Armenian National Committee of Quebec, the Montreal Institute for Studies on Genocide and Human Rights, Concordia University and the Raoul Wallenberg Centre. 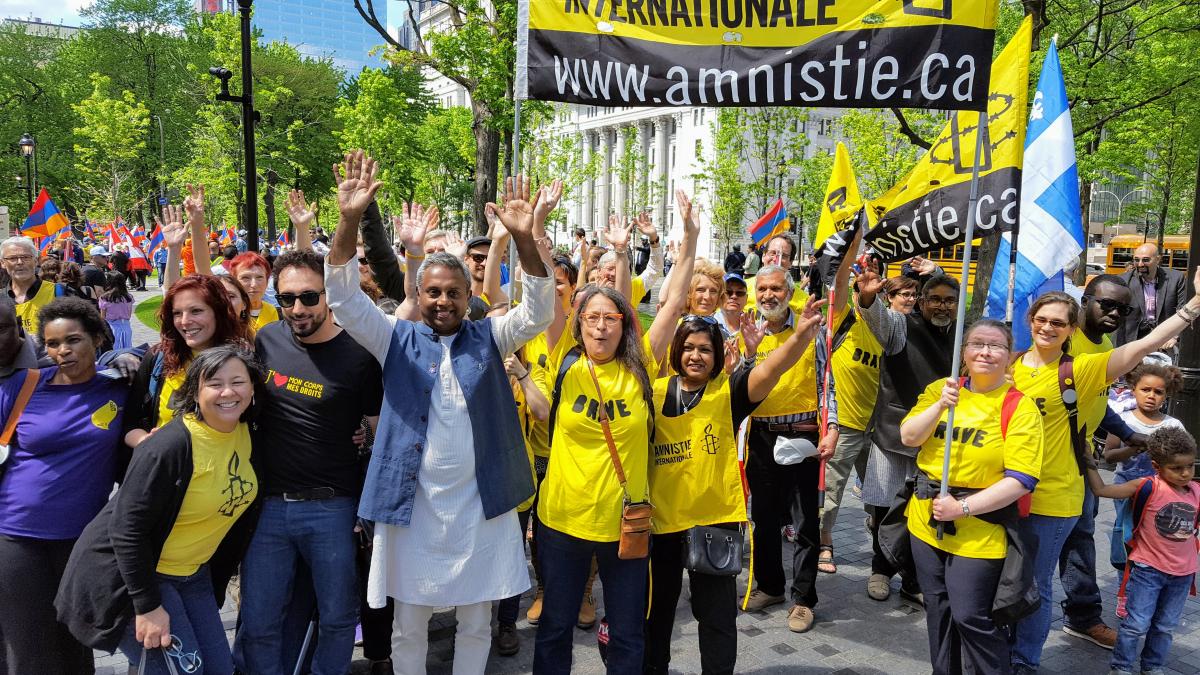 The conference featured many human rights leaders from across Canada and around the world, including Melissa Mollen Dupuis and Widia Larivière, founders of Idle No More Quebec and Ambassador of Conscience award recipents, Romeo Dallaire, Ensaf Haidar (activist and wife of detained blogger Raif Badawi), and Amnesty International's Salil Shetty and Margaret Huang (Amnesty USA's Executive Director). See more from the conference and march on Twitter here >>

As we honour these award winners, please use this moment to urge the Canadian government to keep its promise to forge a new relationship based on respect for the rights of Indigenous peoples. Canada has committed to implement the United Nations Declaration. Now it needs to act on that commitment.