Justice is in jeopardy in Guatemala

Guatemala has a historic unsettled debt regarding the quest for justice for crimes under international law and other serious human rights violations committed during the 1960-1996 armed conflict. Today, more than twenty years later, the country faces another major challenge to ensure access to justice and to effectively combat impunity in the country.

It was recently announced that the activities of the International Commission against Impunity in Guatemala (CICIG) had ended; that the CICIG Commissioner, Iván Velásquez, was banned from entering the country; and that visas for several CICIG staff members had been denied or revoked, among other measures. These were just the most recent efforts by the Guatemalan authorities to undermine and hinder the work of one of the key institutions in the struggle for truth and justice.

Since its creation in 2007, the CICIG has contributed to efforts to investigate criminal networks and structures – and their links with state officials – and ensured that notable cases of corruption and human rights violations committed in the post-conflict era were brought to justice.

In one of the most recent cases, on 9 October 2018, a court in Guatemala found several of the highest-ranking officials in the country guilty of unlawful association, corruption and fraud in relation to a project to clean up pollution in Lake Amatitlán, one of the largest lakes in the country. According to the evidence uncovered by the investigation of the CICIG and the Public Prosecutor's Office, the formula used to supposedly clean the lake was water with salt, chlorine and other corrosive substances harmful to health.

Just two weeks earlier, another court had convicted a network of officials at the Guatemalan Social Security Institute and others for their involvement in the irregular procurement of dialysis services for patients with kidney disease, which resulted in the deaths of more than 50 people.

In both cases, the CICIG played a crucial role in highlighting the impact that corruption can have on the enjoyment and exercise of human rights. The diversion of millions of dollars, which were initially intended to guarantee the right to health or the right to a healthy environment, compromised the state's obligation to ensure economic, social and cultural rights.

The CICIG has played an important role in the investigation of cases of extrajudicial executions committed by members of the security forces in 2005 and 2006 against people in detention and against a campesino (peasant farmer) in Valle de Polochic in 2011. The Commission also contributed to the investigation into those who allegedly ordered, planned and carried out the killing of a journalist in Mazatenango in 2015.

The CICIG has helped fight corruption within a justice system that for years has allowed impunity to continue by identifying state officials accused of interfering with and obstructing criminal proceedings, and even of putting undue pressure on judges and magistrates and undermining the independence of the judiciary.

Amnesty International has monitored the human rights situation in Guatemala for more than five decades. During this time, the lack of justice, or "selective" access to it by groups representing economic and political interests in the country, has been a constant. Over the last few years, we have seen how the CICIG has become an institution of great significance for the fight against impunity in Guatemala, and a very important reference point for the defence of rights in the Americas. In contrast, we have also seen worrying campaigns to delegitimize its work, such as those faced by human rights defenders in Guatemala for decades.

The achievements made with the support of the Commission have shown that impunity can be fought and that even the highest officials can be brought to justice for violating their national and international obligations to protect human rights. The many cases that the CICIG has helped to solve have shown that, with adequate efforts and measures, access to justice can be a reality in Guatemala and in the region.

Instead of hindering the work of the CICIG and the fight against impunity, the Guatemalan authorities should, without delay, devote their efforts to guaranteeing a safe and enabling environment for those who speak out for justice and human rights in the country. 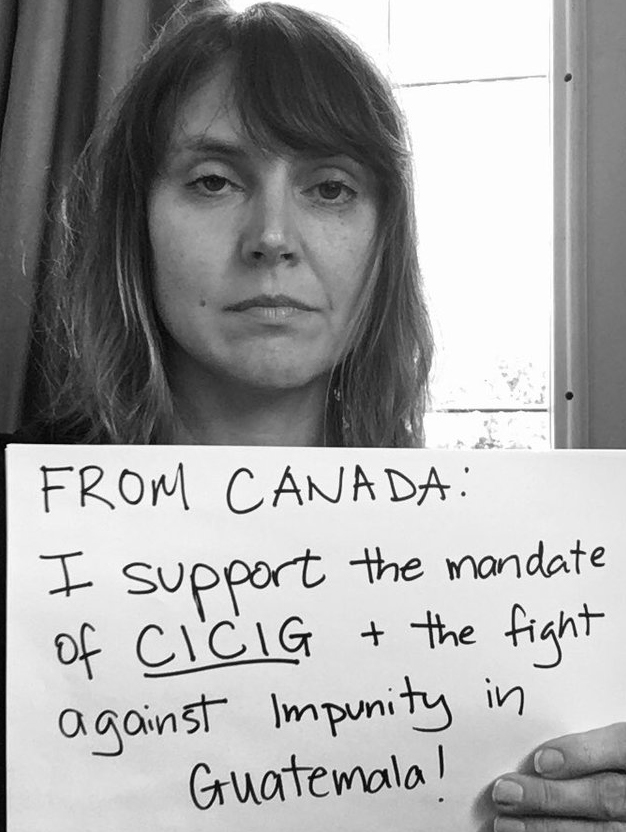 Expressions of concern from Canada are vitally important!

Raise your voice. Urge Canada’s new Ambassador in Guatemala to speak up and defend justice and the important work of CICIG.