Since the 1990s, women in Saudi Arabia have been advocating for the right to drive cars. The driving ban was overturned last year, and women will finally be allowed to drive starting June 24, 2018.

But just weeks before the ban is set to be lifted, Saudi authorities have detained—without charge—and held incommunicado, some of Saudi Arabia’s most prominent and outspoken women human rights defenders, including University of British Columbia graduate Loujain al-Hathloul. At least 11 women human rights defenders have been arrested and six remain in detention. To Amnesty International’s knowledge, none have been charged with an offense. They have no access to lawyers or their families, and they are at risk of torture or ill-treatment.

The activists arrested have all peacefully advocated for women’s right to drive, an end to the male guardianship system, and gender equality. Arresting the most prominent women’s rights advocates could decimate the women’s rights movement in Saudi Arabia. 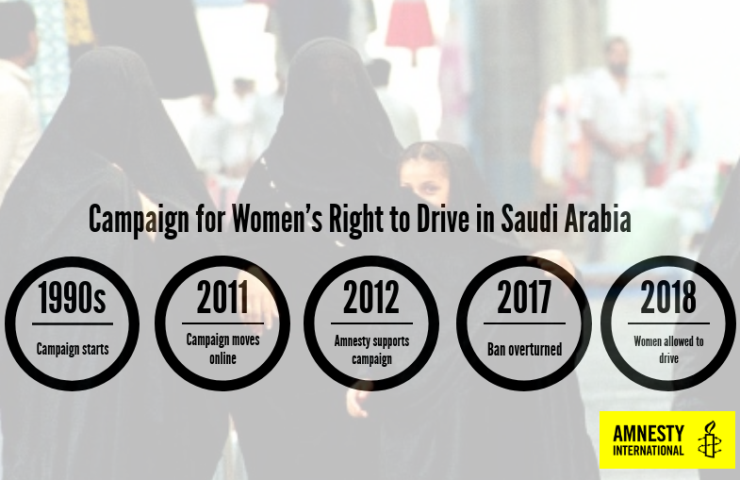 Joint call to action from 30 NGOs including Amnesty International

Driving Ban and the Women2Drive Movement

How many women human rights defenders have been arrested?

Initial reports were that 11 activists were detained. This was later revised to 10. Four activists were subsequently released. Six activists continue to be held without charge and their whereabouts are unknown.

Why would Saudi authorities arrest women’s rights activists just before women are granted the right to drive?

The arrest of women human rights defenders is part of a broader crackdown in Saudi Arabia on freedom of expression, association, and assembly. Amnesty International’s Middle East Director of Campaigns, Samah Hadid, said “Crown Prince Mohammad bin Salman continues to promote his ‘reforms’ to the international public, while silencing anyone at home who dares to question his policies. It is time for this rank hypocrisy to stop.”

Why and how are Saudi authorities trying to label the activists as “traitors”?

Official statements in state media accused activists of forming a “cell,” posing a threat to state security for their “contact with foreign entities with the aim of undermining the country’s stability and social fabric.” A related hashtag describing the activists as “Agents of Embassies,” along with a graphic showing the six activists’ faces, have also been circulating on social media.

This sort of public smear campaign is a tactic often used by governments in an effort to discredit activists and silence dissent.

Stigmatization and smear campaigns are commonly used by many countries to delegitimize human rights defenders and undermine their work. Typically, authorities and others in power make statements tarnishing their reputations. HRDs may be publicly (and falsely) accused of – among other things – being terrorists (often facilitated by excessively broad legislation), defenders of criminals, unpatriotic, corrupt, “foreign agents”, “fifth column” spies, “enemies of the state” or of “picking quarrels and provoking trouble” and opposing national or moral values. In highly polarized societies, stigmatization can have the effect of inciting government sympathizers against human rights defenders, putting them at further risk, even of physical attacks and killings, at the hands of pro-government armed groups or other non-state actors, for example. Learn more here.

'Women's right to drive' activists have been locked up incommunicado since mid-May and are being smeared as traitors by Saudi media.
Take Action