A miscarriage of justice in Argentina: #FreeBelen

Fernanda Doz Costa, researcher on the Americas, reports from a protest outside a court in Argentina where “Belen” returns after being sentenced to eight years following a miscarriage.

It was cold and grey the morning I arrived outside the courthouse in Tucumán city, northwest Argentina. Inside the court, a judge was delivering his reasons for why a woman known as “Belén” (not her real name) had been jailed after having a miscarriage.

Gradually the pavement where I was began to fill with colour. We were there to protest against Belén's conviction. Around me, flags bore slogans condemning gender discrimination. "This justice system is medieval", read signs amid the unmistakable green scarves of those campaigning for the decriminalization of abortion. There was even a replica "women's prison cell".

When there was no more space on the pavement, demonstrators demanding Belén’s release blocked the road. Meanwhile the street band helped turn the feelings of anger and helplessness that had made us join this protest into an atmosphere of energy and unity.

We care because we know that Belén has not had an adequate defence and from the moment she stepped into the hospital, was in fact condemned by her own doctor, a doctor who violated his duty to protect patient confidentiality by reporting her.
Fernanda Doz Costa

Strength in the face of suffering

I’ve always believed that the incredible rhythm and colour of our protests in Latin America help us keep hope alive for those who suffer injustice in cases like Belén's. And for those of us who take that injustice personally.

The songs and chants, the sheer number of people who feel a visceral need to shout out loud that they care (even if those in power do not), that they are outraged that a woman should be imprisoned for being a woman and for being poor – all of it gives the victims and their relatives strength in the face of so much pointless suffering.

Belén arrived at a different court entrance to hear the judgment against her. She heard everything and saw photos of the demonstration. She told her lawyer that she was really moved to see that so many people had come to show their support for her, that so many people sympathized with the injustice that she had suffered.

"I can't believe it", she said. And why should she? In the region there are hundreds of cases like hers. Women living in poverty who go to public hospitals for reproductive health care are treated as suspects as soon as they cross the threshold. They are ill-treated by health care workers. And in general nobody cares.

But Belén's case matters to all of us. It has been publicized in hundreds of articles in the national and international media and it's being widely shared on social networks. Today, Belén's new lawyer petitioned for her release. Attached to the appeal were more than 30 pages listing people and organizations who support Belén.

We care about her because we know about her. We care because, like the women of "Las 17" in El Salvador, Belén epitomizes the violence with which patriarchy is imposed by our states, even to the point of putting women in prison because, they suspect, they have not fulfilled the duties expected of a "good woman".

We care because we know that Belén has not had an adequate defence and from the moment she stepped into the hospital, was in fact condemned by her own doctor, a doctor who violated his duty to protect patient confidentiality by reporting her.

We care because it is an almost absurd example of how criminal law is applied selectively, imprisoning the poor who are considered guilty even when there is no evidence. And if they are women it's even worse. 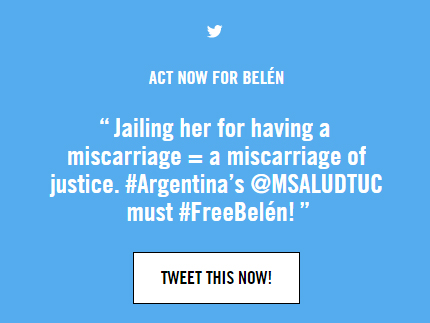 Soledad Deza, Belén's current lawyer, is a feminist who took on the case when she learned that, despite the lack of evidence, Belén had been convicted of aggravated homicide, that is, the premeditated killing of a close relative. She was convicted on the basis of a foetus found at the hospital, which health workers claimed was hers.

"My client has always been linked in people’s minds with the so-called ‘found foetus’,” Soledad Deza told us outside the courthouse. “Despite the fact that according to the evidence the foetus was found before she entered the hospital and despite considerable confusion in the files over whether there were one, two or several foetuses, whether it was a male or female foetus, whether it was the foetus of a 35-year-old woman [Belen was 25 when she went to the hospital] or whether it belonged to someone else.

“This supposed link, first turned into a suspicion by medical staff, then into an accusation by police, then into a supposed forensic link after the fact, then it became a matter of record and finally a legal case, and ALL without a shred of evidence." 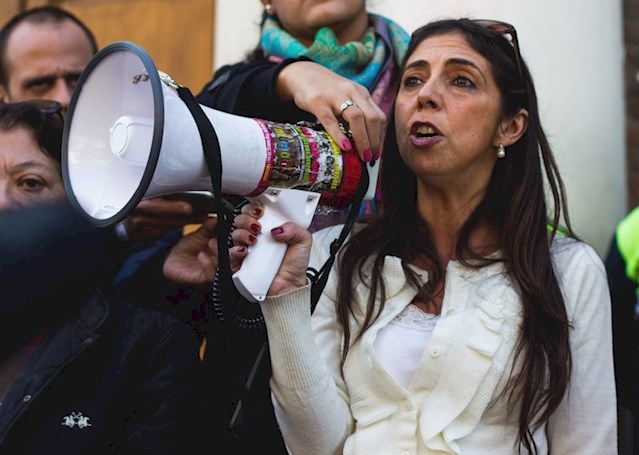 Her words were greeted with loud applause. You could feel her outrage. And those of us on the protest felt it, too, as we waited to hear the judges' "reasons" for convicting Belén. Finally, at Belén's request, the judgment was read privately to her and her lawyer. It wasn't read out publicly as planned. This was because she wanted to protect her identity.

Belén’s eight-year sentence remains. Her lawyer announced she will appeal. Belén should never have been convicted. She wants justice to be served. We all do.