Saman Naseem sends a heartfelt thank you from prison in Iran

With a new trial set for July 12, Saman Naseem – who featured in Amnesty’s global letter-writing campaign Write for Rights in 2015, sends a message to his supporters.

Last year, hundreds of thousands of people around the world showered Iran’s authorities with appeals for a fair retrial for Saman Naseem. He had been sentenced to death for a crime committed when he was just 17 and scheduled for execution in February 2015. He was, however, spared execution after Amnesty launched a worldwide campaign on his behalf. Saman was granted a retrial, which is due to begin on July 12. In the days leading up to this, and with another possible death sentence looming, Saman wrote this message to everyone who has taken action to save his life.

Hello and greetings to you all,

I was born in a village surrounded by snow-capped mountains, forests and deep and winding valleys. It could be said that one of the most beautiful spots in the world is my village Vasneh, near the city of Marivan [in Kurdistan province, north-west Iran].

As a child in Kurdistan, I grew up learning to speak a language which has some of the most ancient sounds of any language. But today, it is impossible to speak freely and impossible to live in this land.

Here, children learn about poverty, injustice and death before learning about children’s games and the joy of play. Instead of toys, they become familiar with anti-personnel mines and unexploded artillery and tank shells.

As a youth, prison awaits you if you choose not to accept the present situation and to speak out. You can either leave your homeland and your thousand-year old heritage behind and become a drifter without any home in this vast world, or stay and fight for the rights of your people. No other option exists.  Like many other children in my homeland, due to poverty and lack of opportunities for schooling in my village, I was unable to continue my education past the fifth year of primary school.

I witnessed the oppression, destitution and discrimination in my hometown and, driven by my youthful enthusiasm for a free life, I left my family, home and village to stand up against all these injustices.

“I was sentenced to death”

On 16 July 2011, I was surrounded by members of the Revolutionary Guards in the Qandil Mountains [West Azerbaijan province, north-west Iran] who were showering us with heavy artillery and mortar fire. I was captured while my comrades lay dead.

In detention, I was interrogated and tortured. Later, I was sentenced by a court to death. Every moment of the past few years and all the events that have happened hold so many stories that they cannot even be listed in this letter.

On 18 February 2015, some of my fellow death row inmates and I were taken outside the prison; three of them were executed. I and one of the others were put into solitary confinement. For the next four months, we had no access to a telephone or to visitors, or to any news from the outside world. For four months, the shadow of death hovered over our heads and we lived in anticipation of our executions.

My family had come to believe that I had been executed and even held a funeral ceremony for me. This is why, when after four months I spoke to them on the telephone, they were in complete shock and disbelief. 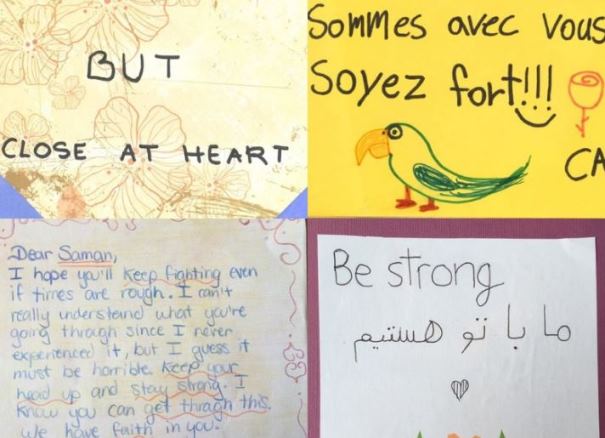 Although I have not received your letters, and it is not even possible to receive them [as the prison authorities will not allow it], I have been informed of your messages. They are messages of solidarity and kindness that show me I am not alone and that, in addition to my friends and fellow prisoners, there are conscientious people around the world who are standing by me.

This gives me hope and strength to live my life and to keep fighting under all circumstances. It is not important where I am and where you are. What is important is being together and not feeling alone.

These precious efforts of you gracious people is the experience of solidarity in action.

I hope that all your days and nights are filled with joy and happiness.

To finish, I hold your hands tight and bow down to your honourable kindness.

I wish you all the best

Note:  This is an edited version of Saman Naseem’s letter.

WHAT YOU CAN DO:

Iran is a party to the Convention on the Rights of the Child, which bans the use of the death penalty against juvenile offenders, yet it continues to sentence them to death. Tweet Iran’s Supreme Leader Ayatollah Khamenei today and help ensure that Saman Naseem is not sentenced to death again: .@khamenei_ir #Iran must give juvenile offender #SamanNaseem a fair retrial without recourse to the death penalty

Learn more about our work on Iran