It's important we call on authorities to stop this wave of killings - but also at times of crisis, the need to show meaningful solidarity with defenders becomes ever more necessary.

Steps you can take to show solidarity

1.      Write a message of solidarity and encouragement to show these brave activists that they are not alone or forgotten. The world is watching! You could make a card or drawing or simply hold up a sign as in the examples below. Take a close-up photo of yourself holding your solidarity message in English or Spanish and share it directly with the CCDA or CODECA:

"Solidarity with land defenders of the CCDA: You are not alone! #Brave @CCDA_Guatemala @jimmymoralesgt @AIDefensorxs"

These are the names of the human rights defenders who were killed, in case you would like to personalize your message:

These are the names of the human rights defenders who were killed, in case you would like to personalize your message: 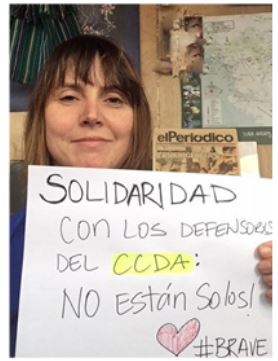 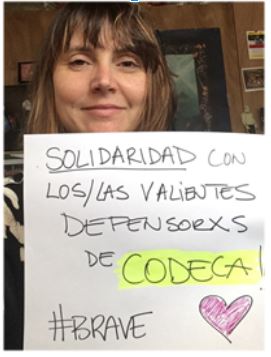 2.       Download and sign a print petition calling on the Guatemalan government to stop the attacks against courageous land, water and environmental defenders, such as those working for CODECA and the CCDA. Ask your friends and family to sign the petition and return it completed to: #430-319 West Pender Street, Vancouver, BC V6B 1T4 care of Tara Scurr, Amnesty Canada

3.      Send a Tweet to Guatemala’s new Attorney General;  María Consuelo Porras about the deadly attacks on CODECA and the CCDA.

4. Add a Solidarity with Defenders frame on your Facebook profile picture. Add a link to this post as your photo caption to get more people involved! 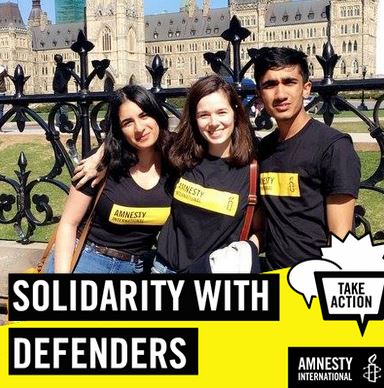 5. Learn more about business and human rights concerns in Guatemala by visiting our webpage: Guatemala: Don’t Undermine Our Rights >>> where you will find links to documentary films, reports and the latest urgent actions.

Thank you for your solidarity with courageous land defenders in Guatemala!

See solidarity messages below from social media with land and water defenders in Guatemala.