Each year in October, Indigenous women and men travel from Fort St. John, a small community in northeast British Columbia, to attend vigils on Parliament Hill in Ottawa honouring the lives of missing and murdered Indigenous women and girls. They bring with them the powerful stories of the mothers, daughters, sisters, aunties, friends, and community members whose lives have been cut short. Each year they have more stories to share, as the list of stolen sisters from northeast BC grows ever longer. And each year, the calls from these grassroots activists for concrete action to end this homegrown human rights crisis grow ever louder.

On October 4th, attend a vigil in your community honouring our stolen sisters.

The National Inquiry into Missing and Murdered Indigenous Women and Girls has started. Our solidarity with Indigenous women, families, and communities is needed now more than ever. Sign the pledge commiting yourself to listen to the voices of those impacted by violence throughout the inquiry, to respectfully engage in dialogue surrounding the inquiry, and to take action to ensure that government and law enforcement take immediate action to end violence Indigenous women and girls.

Over the past two years, Amnesty International has conducted research into the links between gender, Indigenous rights, and energy development in northeast BC. This research was prompted by concerns from community activists in northeast BC about the high number of missing and murdered Indigenous women and girls in their region, and fears that an influx of young, male, largely non-Indigenous transient workers coming to their region for jobs in the oil, gas, and construction sectors, is causing social strains and creating a heightened risk that Indigenous women and girls will experience violence. Out of Sight, Out of Mind, Amnesty International's new report set for release on November 3, explores the factors putting Indigenous women and girls into harm’s way and denying them the protection they deserve.

Throughout the course of our research, Amnesty International had the privilege of meeting with family members of missing and murdered Indigenous women and girls. Like missing and murdered First Nations, Inuit, and Métis women and girls across Canada, the stolen sisters of northeast BC are not merely statistics. They are loved and valued and so terribly missed. They, and all Indigenous women and girls in Canada, deserve every opportunity to live in safety and dignity. Here are reflections that families of some of the stolen sisters of northeast BC shared with Amnesty International. 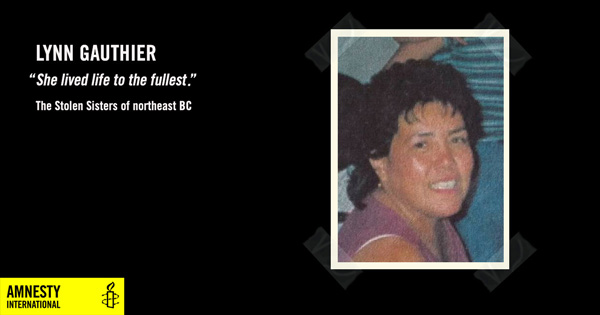 Lynn Gauthier's sisters remember her as outspoken, smart and determined. “She was a bubbly person and nothing scared her or stopped her. She lived life to the fullest,” said her sister Norma Podolecki. Lynn, the daughter of the elder Lillian Gauthier of Saulteau First Nation, was brutally murdered by her spouse in 2000 after a long history of domestic violence. Her sisters, Geraldine Gauthier and Norma Podolecki, told Amnesty International how their sister’s spouse, who had come to the region to work in construction, had isolated her from family and friends and threatened to kill her if she left him. She never reported the violence he inflicted upon her to the police because “that’s how scared she was,” Geraldine said. 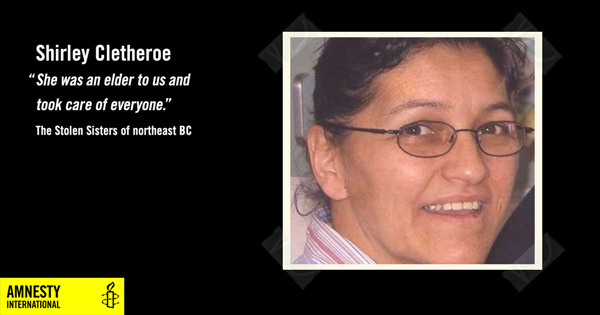 Shirley Cletheroe worked hard to support her five children. She was a nurturer, someone who would bring people into her home and take care of them. “Her door was always open. Everyone knew they could come there. She would have a meal on and tell you to sit down and eat. She never looked down on anyone,” said her niece Brandy Cletheroe. “She was an elder to us and took care of everyone." Shirley went missing at age 45 in June 2006; she has not been found. 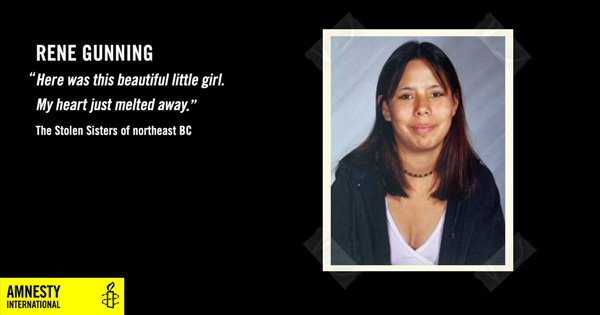 Rene Gunning grew up in Fort St. John and Nanaimo. “When Rene was born, I was the first to hold her,” said her father Jo Gunning. “Here was this beautiful little girl. My heart just melted away… We talked about everything,” he said of their close relationship. Nineteen year old Rene went missing from Edmonton in February 2005 along with her friend, 16 year old Krystle Ann Knott. Their remains were found in May 2011 near Grand Prairie, Alberta; their murders remain unsolved. 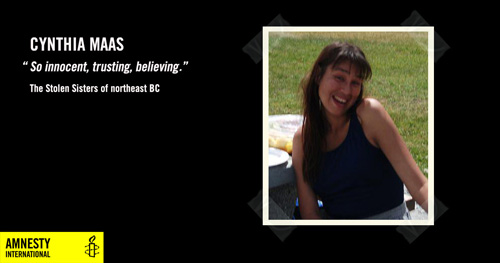 Cynthia Maas was “so innocent, trusting, believing,” said her sister Judy Maas. Cynthia's daughter was her world and Cynthia struggled with the social services system to access supports she needed to be able to best take care of her. Cynthia, who was originally from Fort St. John, went missing from Prince George in September 2010. Her body was found the following month. She was 35. 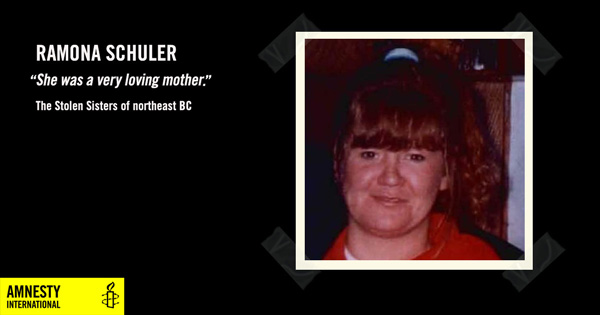 Ramona Shular was the joker of her family. She “was a very loving mother… very involved with children all the time,” said her sister Becky Shular. Ramona went missing at age 37 from Fort St. John in November 2003; she has not been found. 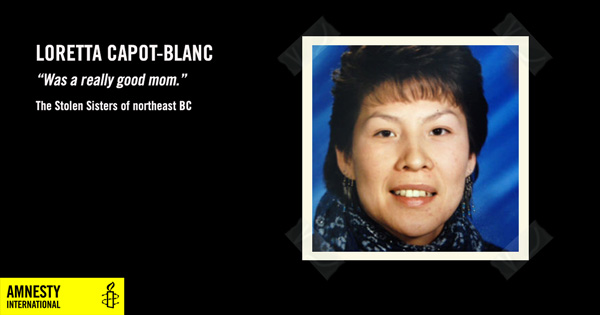 Loretta Capot-Blanc “was a really good mom. She always had her baby on her back and she breastfed. She always had him [her son] dressed up really nice,” her mother Elsie Duntra. Loretta went missing at age 31 from Fort Nelson First Nation in August 1997. Her remains were found three weeks later; Loretta’s murder remains unsolved. 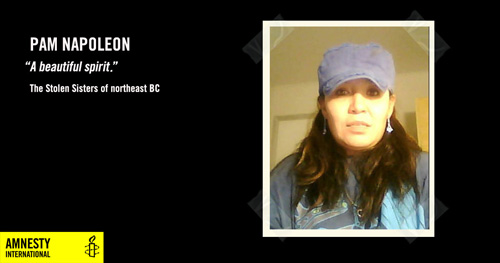 Pamela Napoleon had a beautiful spirit, according to her family and friends. She put others first and always showed respect. She loved hunting and camping, was an excellent cook, had a wide circle of friends, and was well liked and respected. Pamela went missing from Blueberry River First Nations in July 2014 and her remains were found the next month; her murder remains unsolved.

On October 4th, please take a moment to honour these women, attend a vigil, and sign the pledge to re-commit yourself to taking action to make sure there are #NoMoreStolenSisters.

Jackie Hansen is the Major Campaigns and Women’s Rights Campaigner for Amnesty International Canada. Follow her on Twitter @AI_WomensRights

Pledge to Stand with Indigenous Women and Families to End Violence