Join activists around the world this Human Rights Day for a letter-writing marathon on Twitter and Instagram.

Write for Rights is one of the world’s largest human rights events and on Human Rights Day we want the world to see how far and wide the campaign reaches, and all the great work we do to change lives.

On or around December 10th, 2017 we will be using Twitter and Instagram to show that people all over the world are writing letters for those whose rights have been abused. You can find more information on Write for Rights cases here.

Let’s show the world that human rights matter, by making the 2017 Write for Rights hashtag #WriteforRights appear in conversations online throughout the day!

3 ways to tweet with us on Human Rights Day! 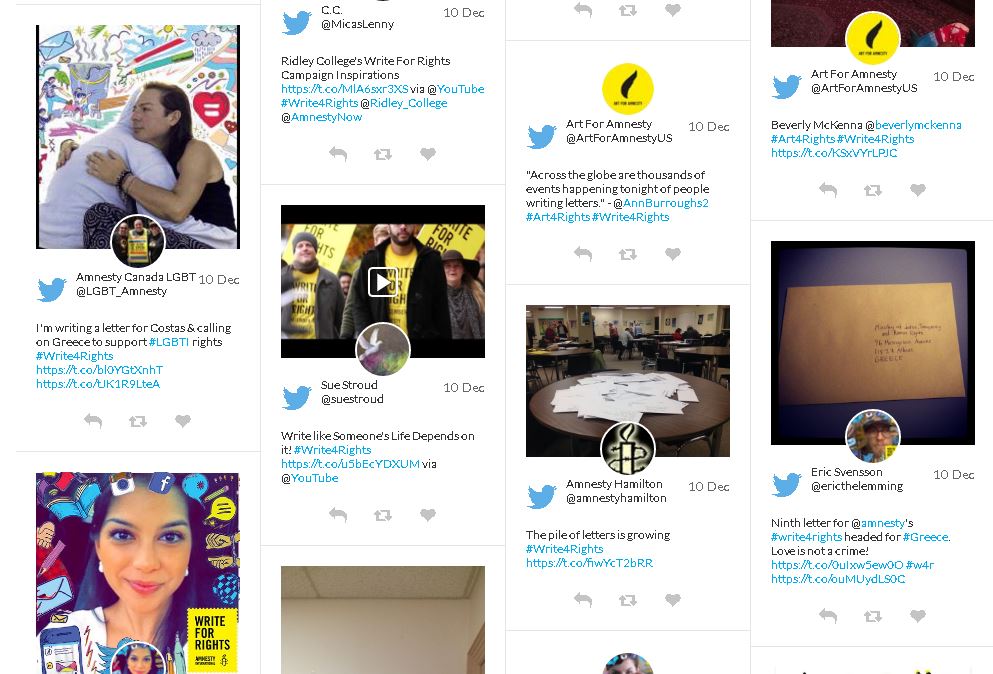 Here are a few examples: [More sample tweets below]

2. Let everyone know that you Write for Rights

Take a selfie to show everyone that you're a part of Write for Rights and encourage them to join you. 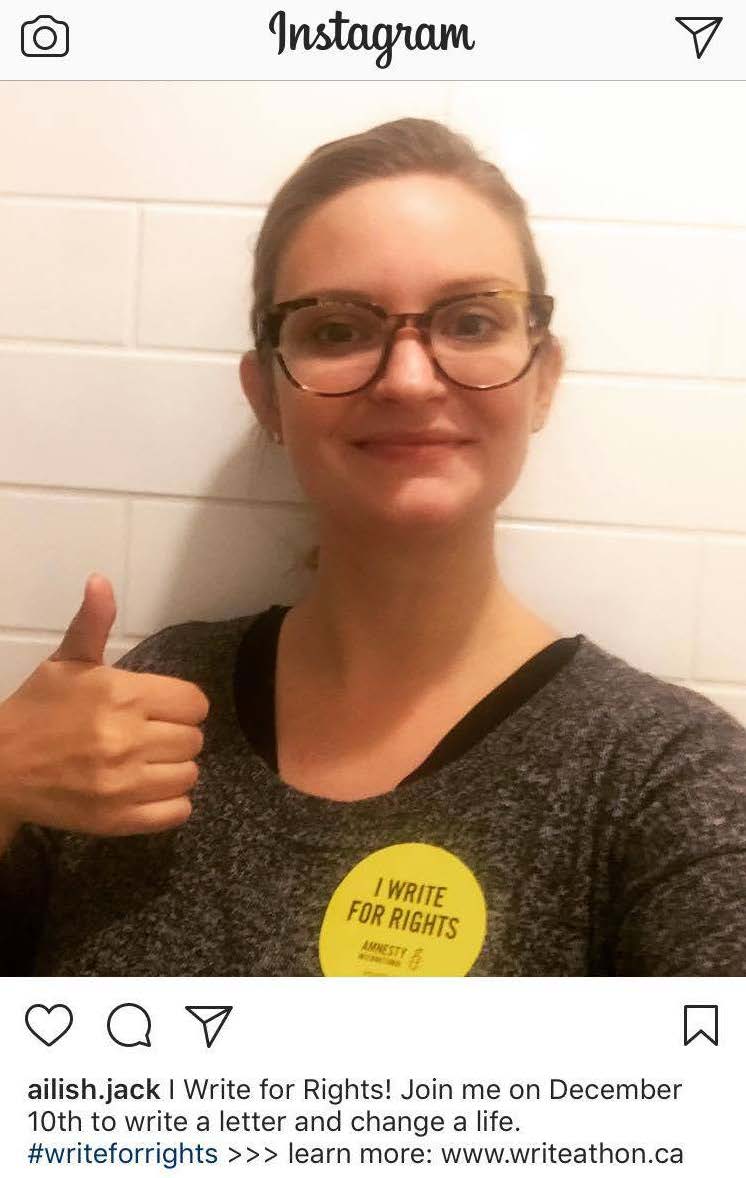 Order your own "I Write for Rights" sticker today in our online shop. 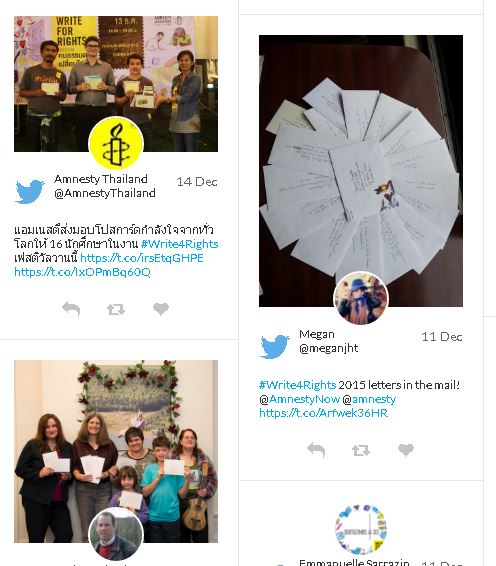 Take a photo or make a video (e.g. everyone cheering together “Write a letter, change a life!”) and let us know where you are and what are you doing in your tweet. Amnesty Canada will be sure to share your pictures on our solidarity page and help to spread news of your event.

On December 10th, you can project and view our solidarity page to connect with other Amnesty supporters in real-time.

If you`re holding a Write for Rights event, set-up a projector and let everyone follow the action. 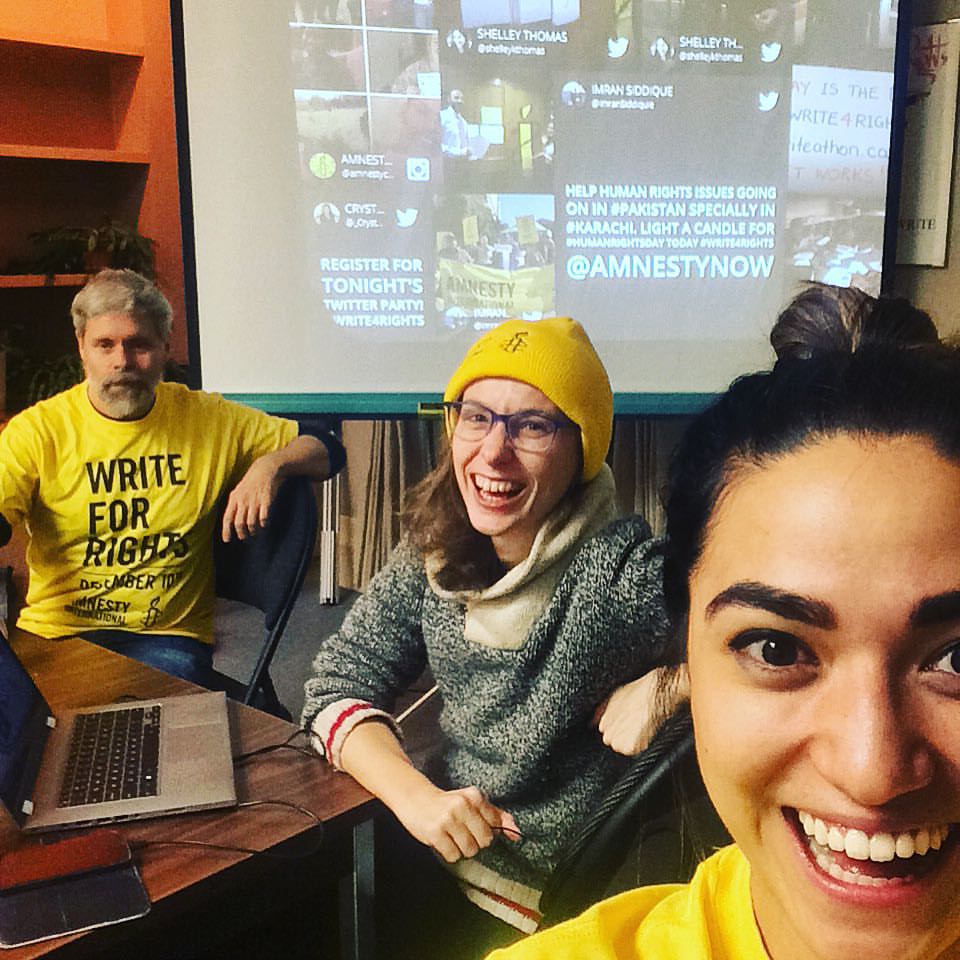 Sample Twitter and/or Instagram messages for each case we are working for. You're also encouraged to write your own!

Sample tweet: Mahadine was arrested for criticizing the government in Chad. Join #WriteForRights to demand his release now pic.twitter.com/1PwHqElI6Z www.writeathon.ca

Sample tweet: I stand with #NiYalan, a disabled housing activist in China who has faced 20 years of harassment. Pls RT to support #WriteForRights pic.twitter.com/ly1lGhp9cU

Sample tweet: Pls RT so @AlsisiOfficial sees this. Hanan Badr el-Din is detained for searching for her husband. She must be freed! #WriteForRights www.writeathon.ca pic.twitter.com/r3p6DRJ2iA

Turkey - Taner Kilic and the Istanbul 10

Sample tweet:  Taner Kilic has been in jail since June for doing nothing wrong! Call on Turkey to free him immediately and unconditionally pic.twitter.com/d9nDpXghYg #FreeTaner #FreeRightsDefenders #WriteForRights https://e-activist.com/ea-action/action?ea.client.id=1770&ea.campaign.id=72390