Signing petitions and writing letters to protect human rights matters! Achieving our desired goals may take time but raising our voices helps create pressure. I saw that first hand during a visit to the Embassy of Mexico in Ottawa on November 20th.

We met with Ambassador Arturo Hernández Basave (below 3R) and Legal Affairs Secretary Alfonso Vera Sanchez (left) and handed over more than 35,000 messages of support, solidarity and calls for action on behalf of the 43 disappeared students of Ayotzinapa, as well as other victims of grave human rights abuses in Mexico.

I’m very proud that our delegation included youth and student voices. It made our message so much more powerful. Gabrielle Crovasce (above 2L), a leader of the National Youth Committee for the francophone section of Amnesty Canada; Ashna Ali (4L), our youth intern; and myself (5L), head of our National Youth Action and Advisory Committee, were able to communicate how the forced disappearance of the students of Ayotzinapa has moved us as youth and students in Canada, the important action we have taken - and will continue to take! Sergio Michel (R), a Carleton University PhD student, added unique heartfelt perspectives as a Mexican worried about the impact on loved ones of the crisis of disappearances, violence and impunity in his country of origin.

Our delegation was strengthened by the participation of Amnesty Canada’s National Action Coordinator Ailish Morgan-Welden (our amazing photo taker), Executive Director Jayne Stoyles (below) and Mexico campaigner Kathy Price (underneath). They read powerful excerpts from letters written by supporters in different parts of the country on the fourth anniversary of the day the students were taken away, never to be seen again. 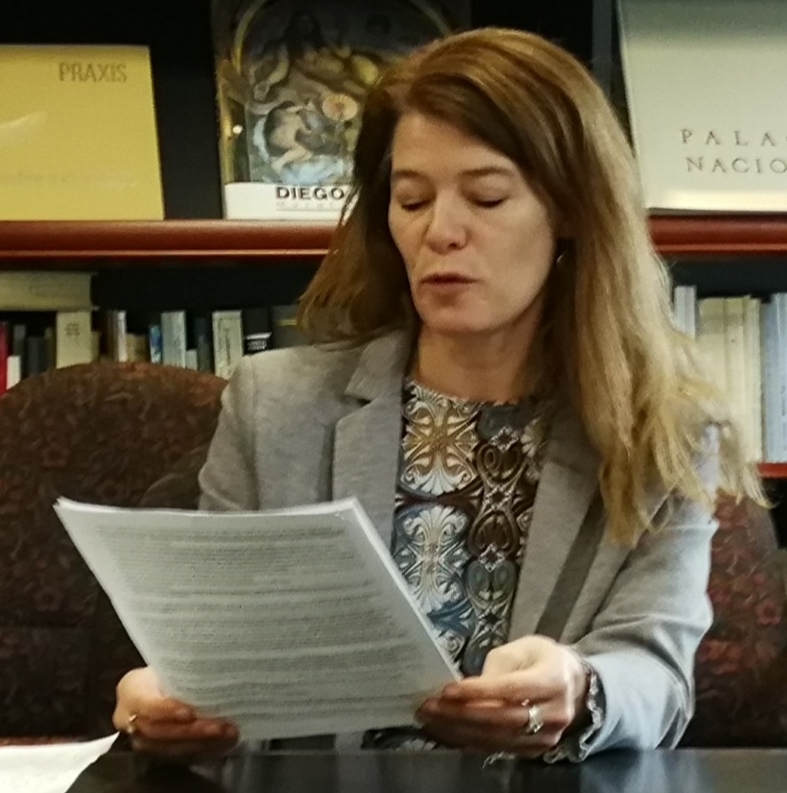 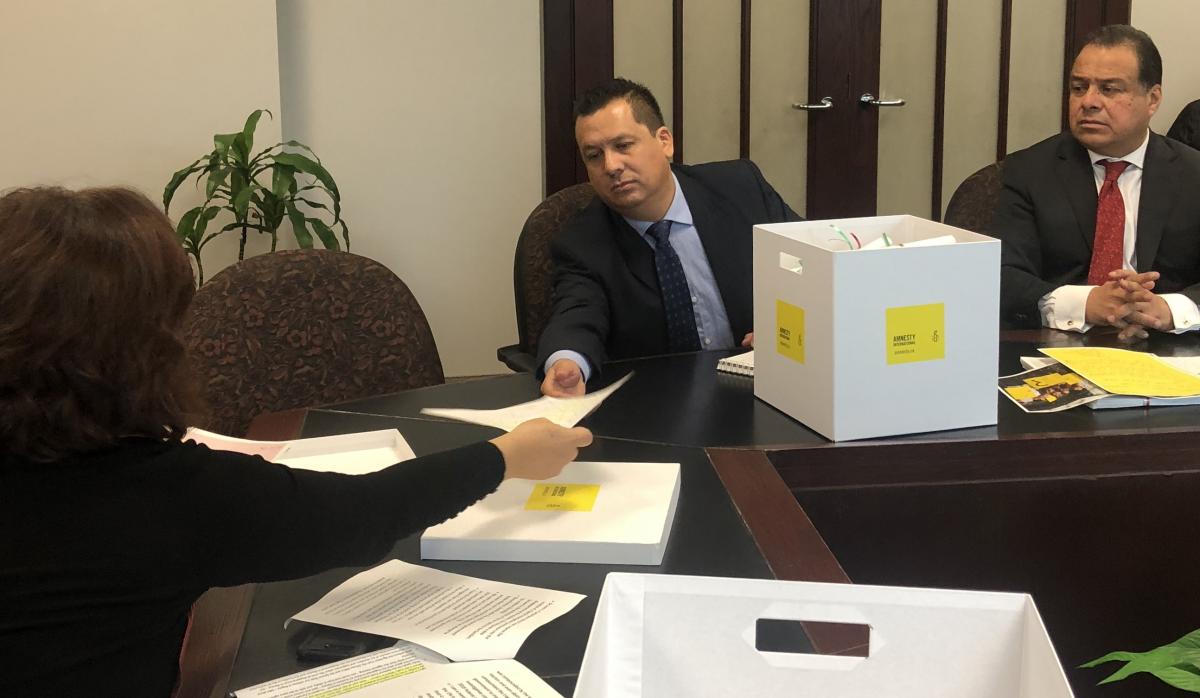 We presented two giant letters signed by hundreds of people in Ottawa and Toronto. 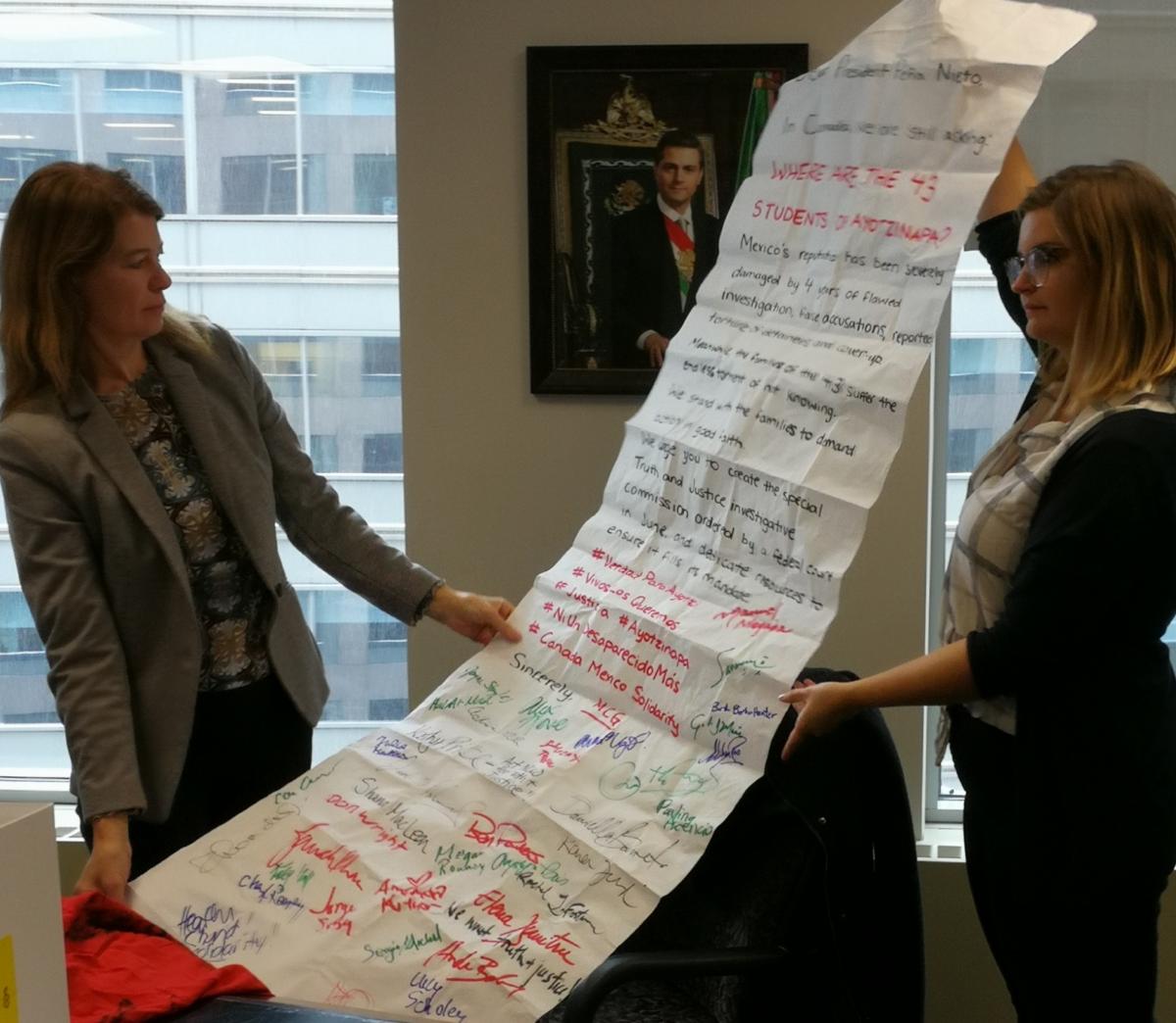 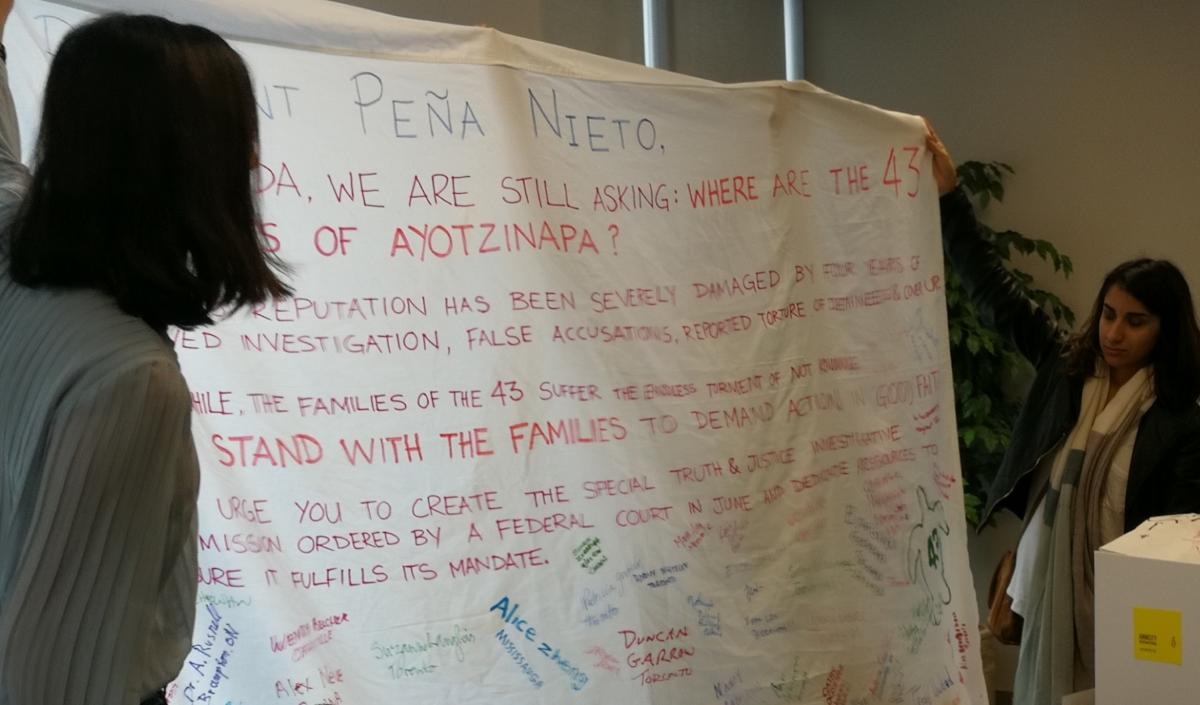 We also handed over a banner signed by dozens of activists in Regina. 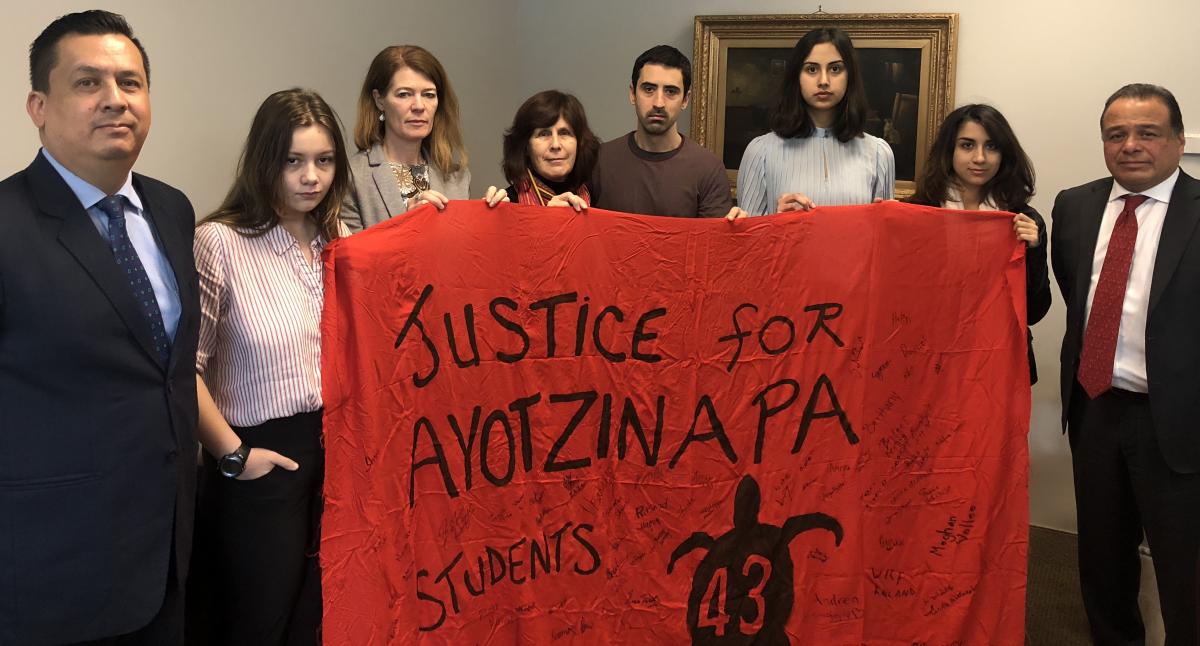 We showed the Ambassador photos from a vigil in Montreal and Gabrielle quoted from a moving poem called “43 Students” that McGill student Teresa Altamirano Mayoral wrote and read out at that vigil. 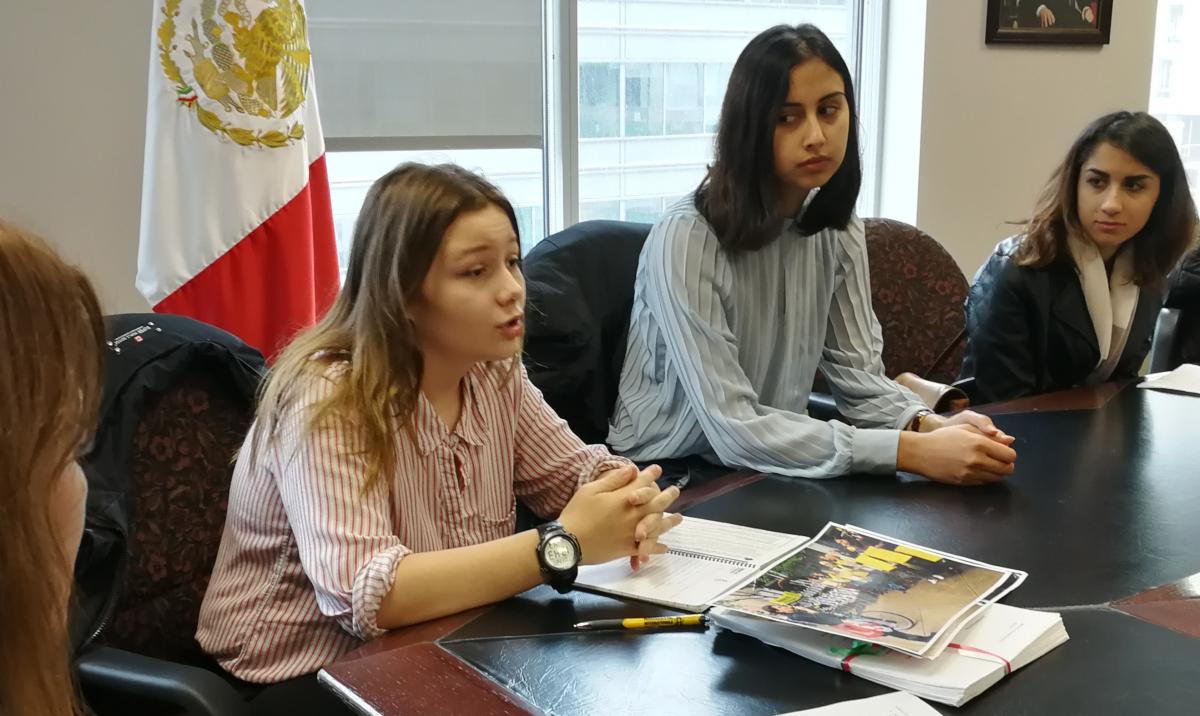 The boxes of letters we delivered, each letter wrapped in the colours of the Mexican flag, called for the creation of a special investigative commission to ensure truth and justice for the 43 missing students of Ayotzinapa. A key argument we emphasized over and over was that if there is no action to get to the bottom of a case as well known as that of the students, what hope is there for disappearances without the scrutiny of civil society or the international community? 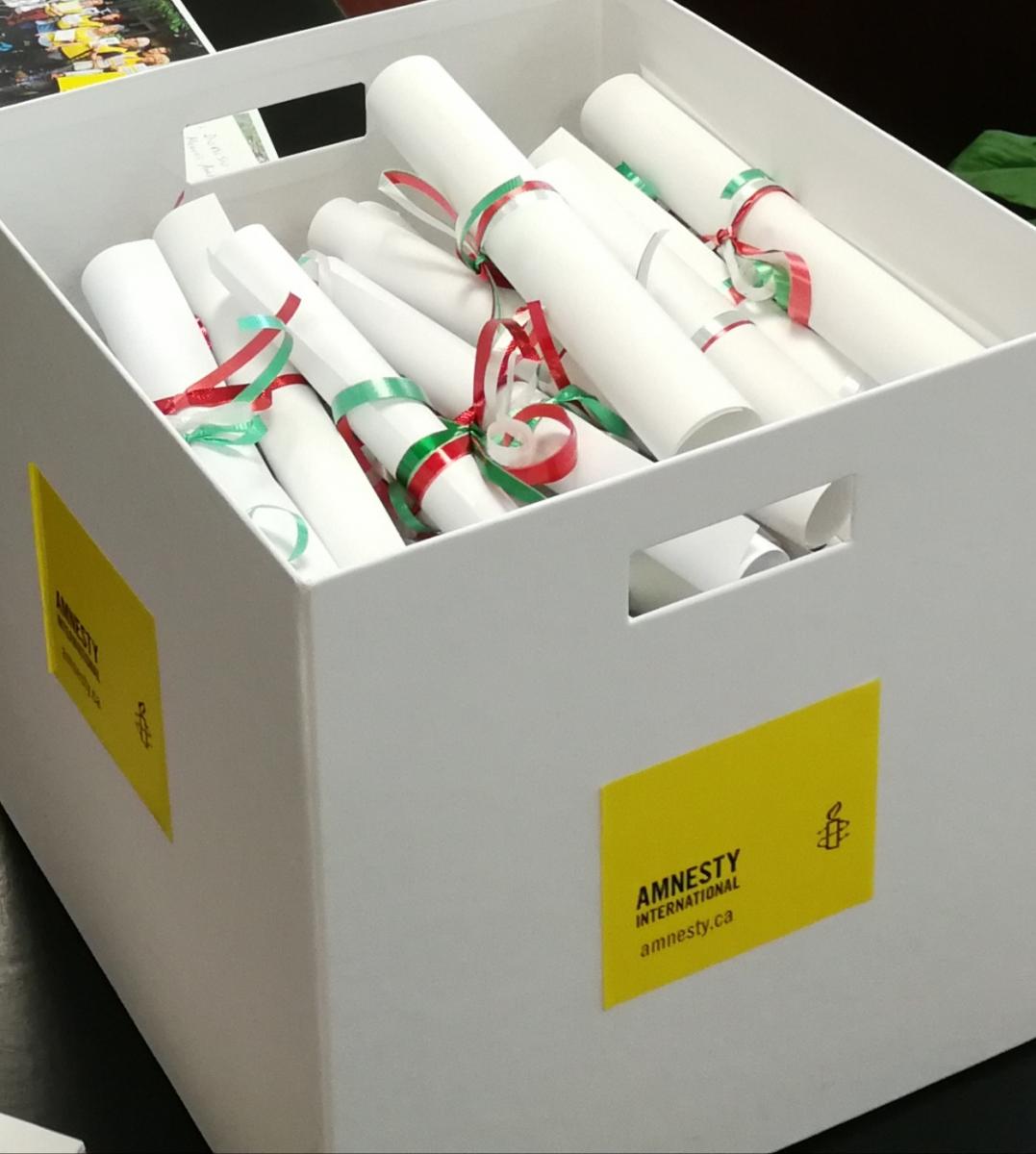 The Ambassador (above right) applauded our efforts and expressed his solidarity with the families of the disappeared. The most meaningful part of the Ambassador’s response for me was his recognition of the importance of the activism we delivered:

“We are touched by your action," he said. "It shows your sisterhood with the victims of human rights abuses who are suffering terrible violence in Mexico. We acknowledge that things are not as they should be. We know we need to do more to protect human rights. On July 1, Mexicans voted for change. The incoming president promised to implement the investigative commission on the Ayotzinapa disappearances. We ask you to maintain your eyes on Mexico. It’s very, very important. The actions of your supporters in Canada create pressure. This can help to make change happen.” 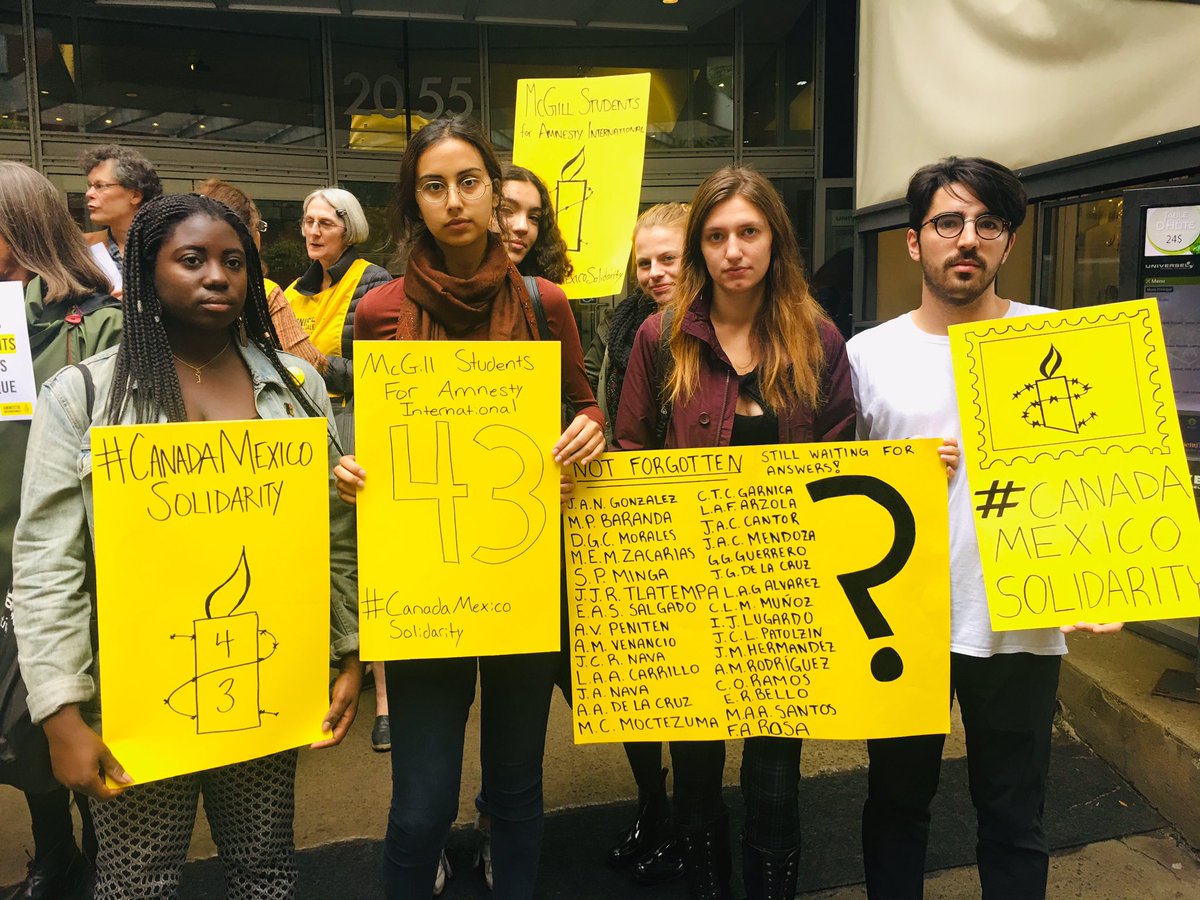 As a youth activist who has been taking action on the case of the 43 students since they were disappeared, the meeting was definitely emotional. I was very disheartened that four years later, we still had to have this meeting to demand truth and justice for the missing students and their families. At the same time, it was very touching and empowering to actually see all the messages from so many other activists and be able to make sure the Mexican government also sees and receives them.

I wish that every young activist who campaigned for the students of Ayotzinapa could have been there with me, seeing the letters they wrote and the pictures of themselves at demonstrations in the hands of the Ambassador. 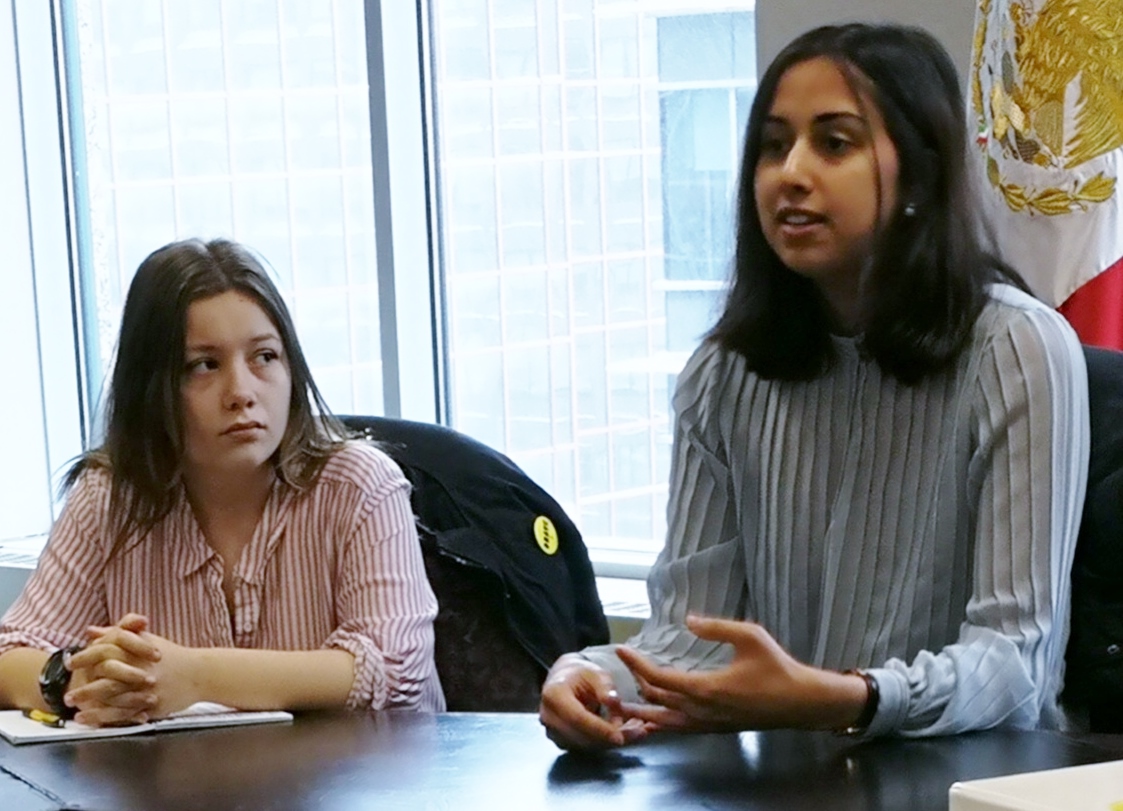 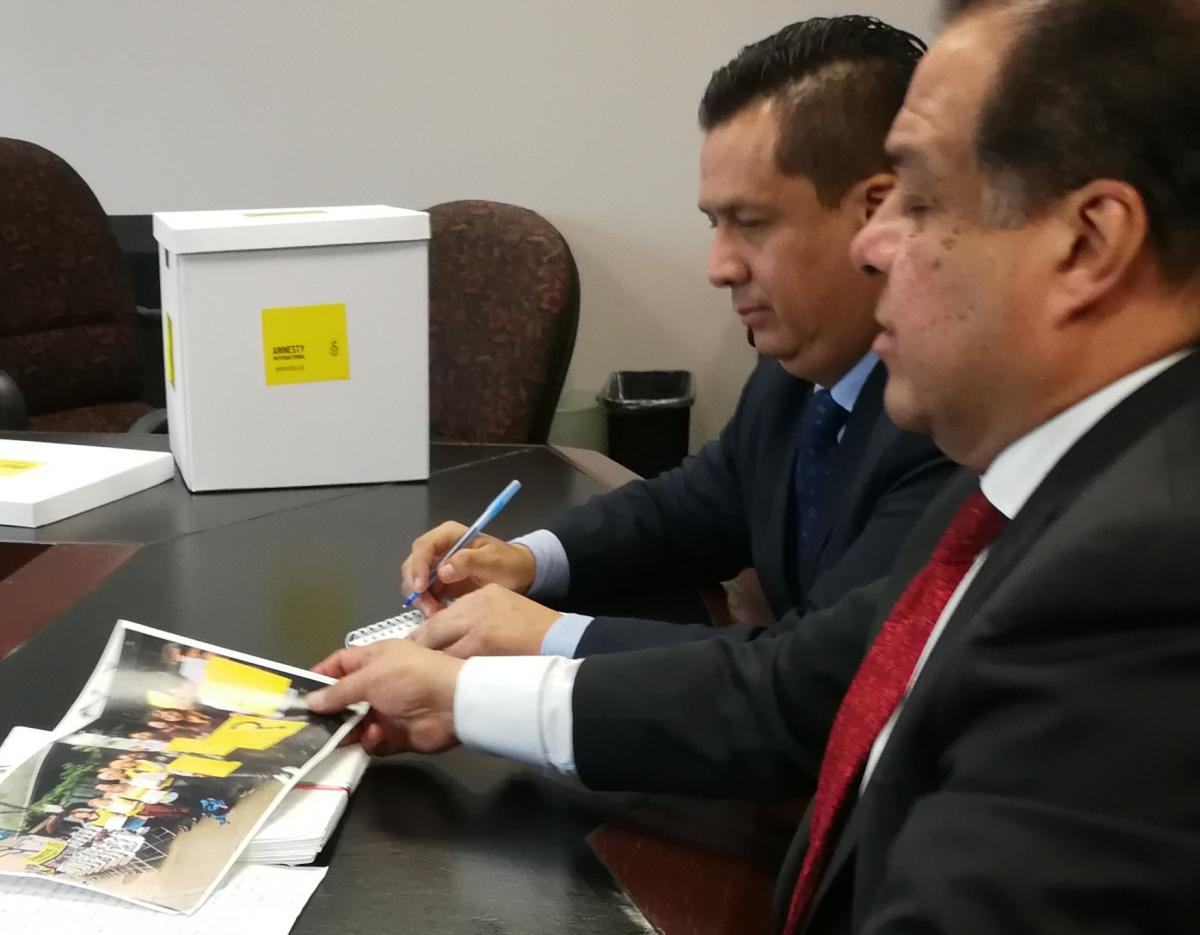 Moving forward, I want young activists to know how powerful they are. I want them to know that all of their hard work mobilizing at school, on campus, and in their communities is incredibly important and is slowly setting the gears for change in motion. 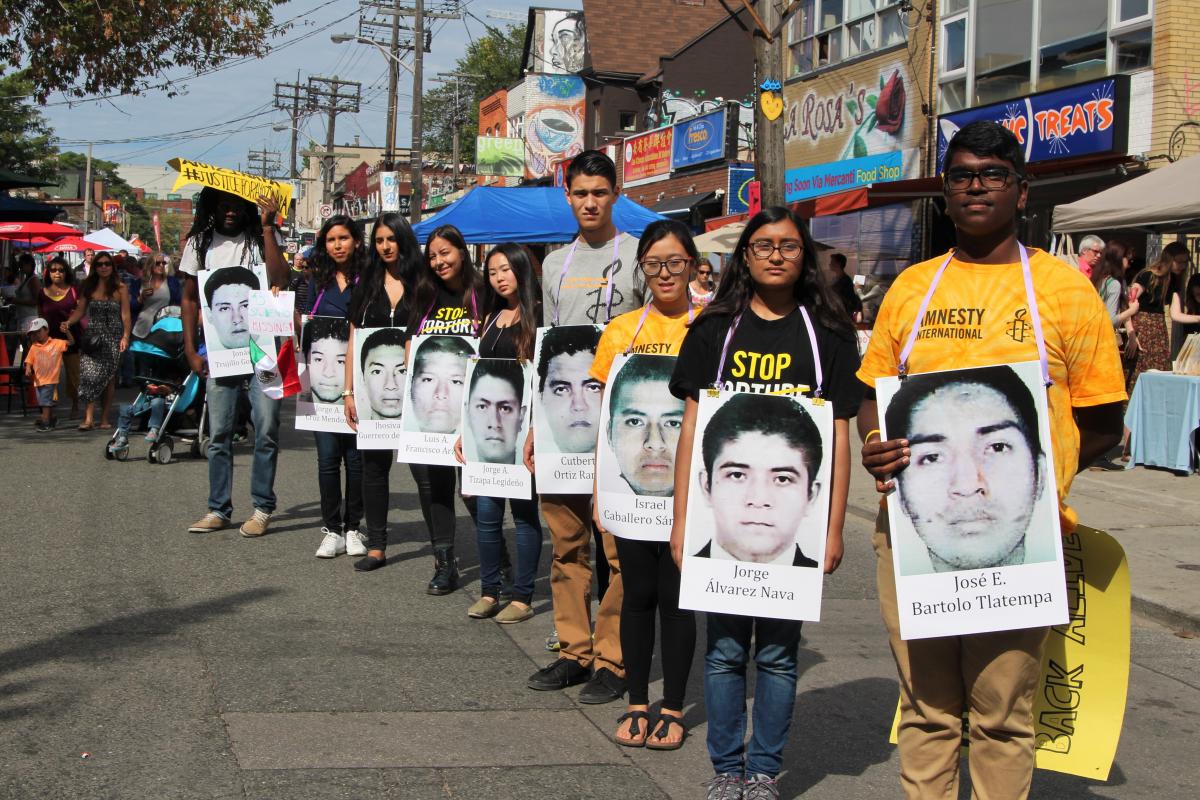 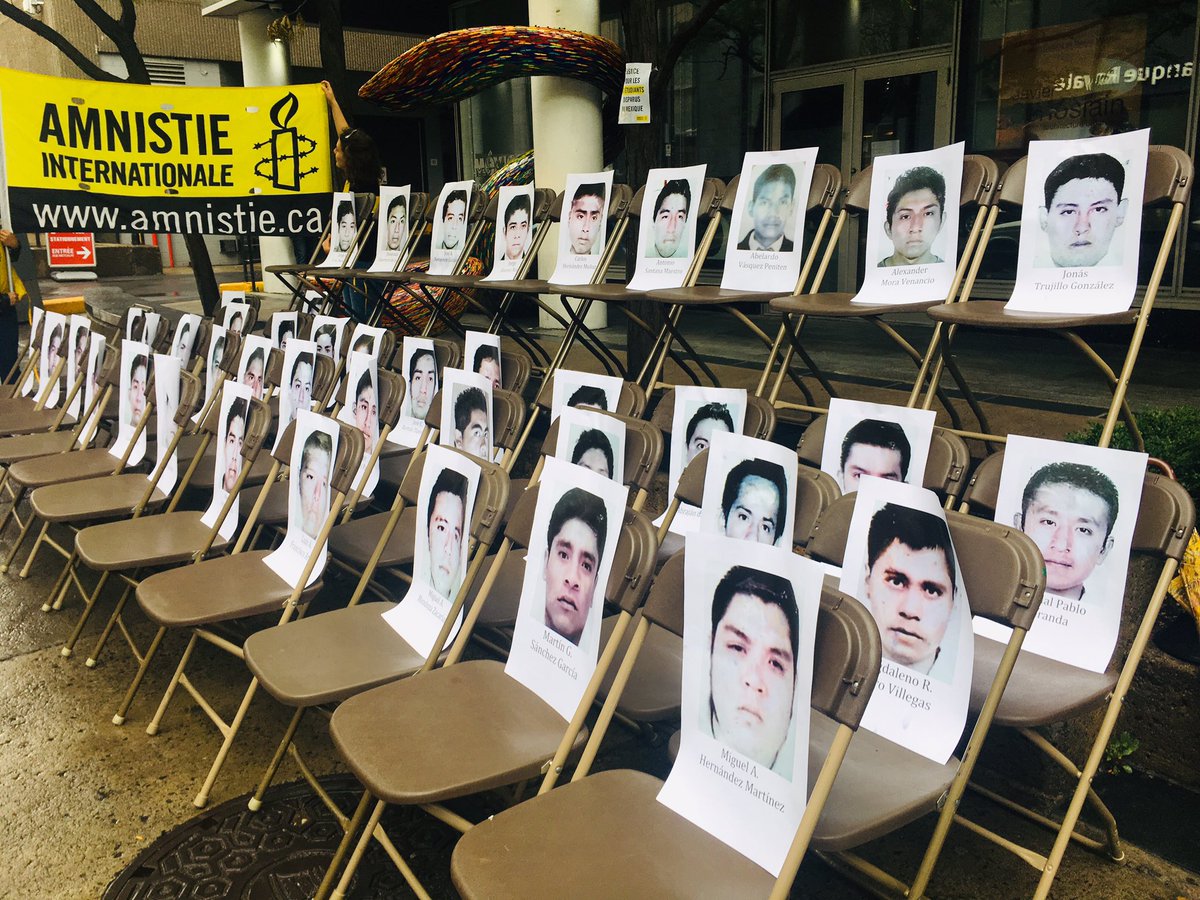 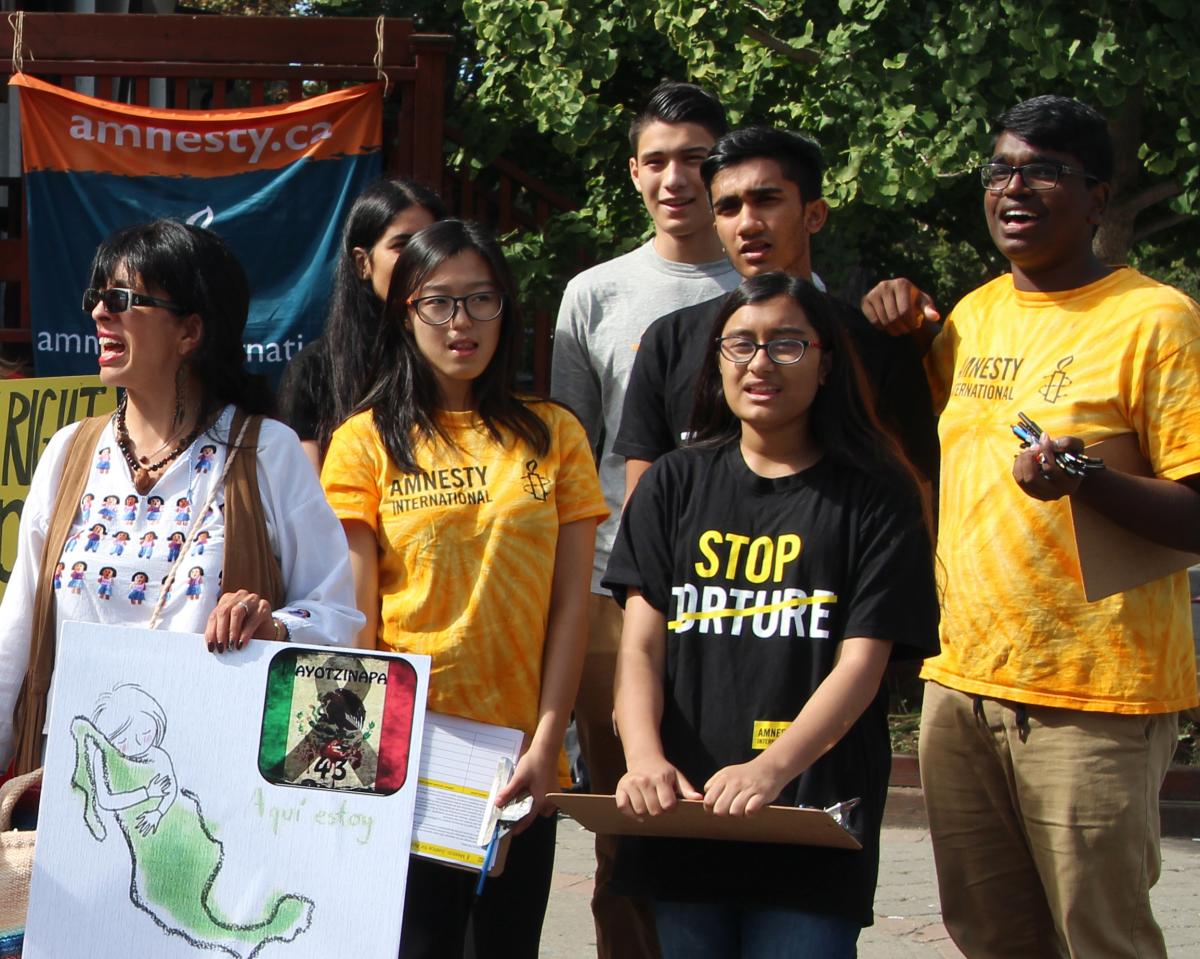 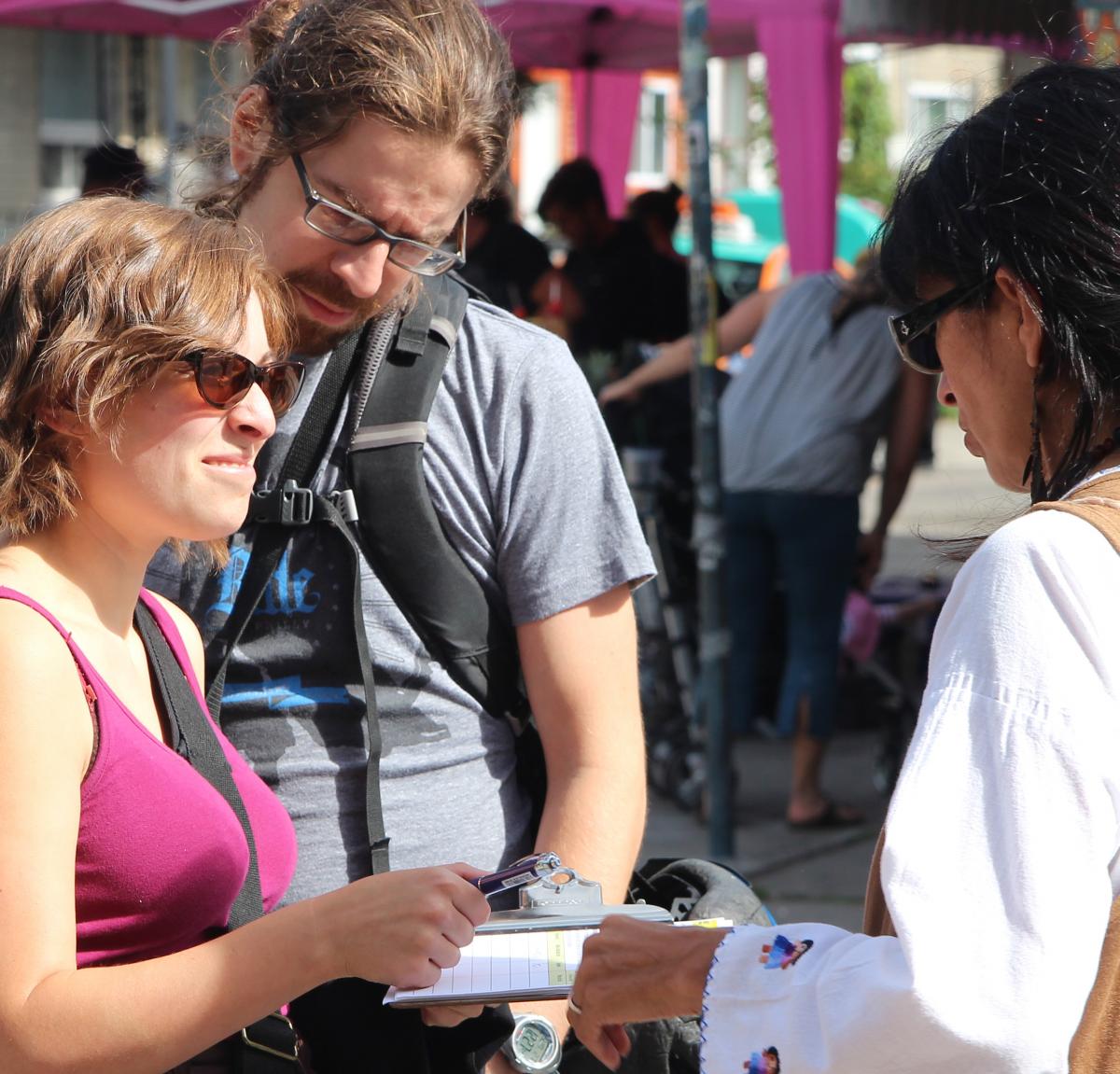 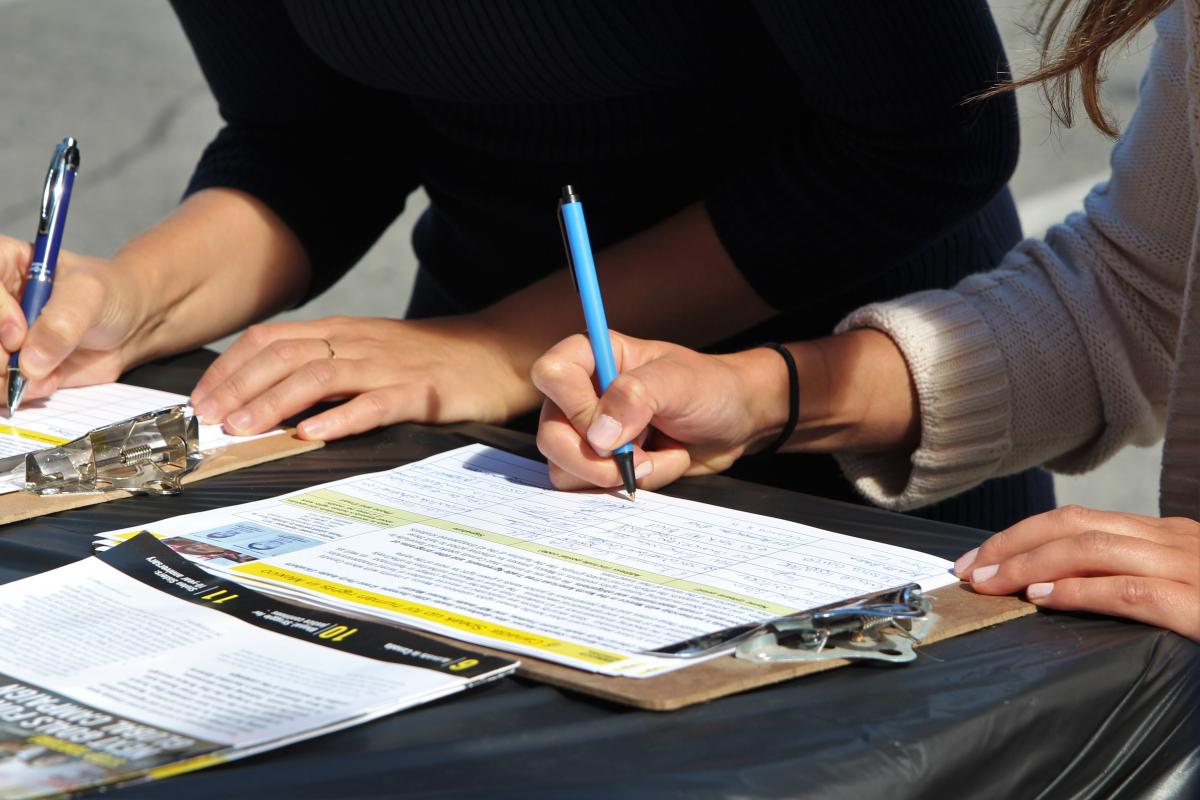 The incoming Mexican government can’t ignore the awareness that exists in Canada. Or the deep solidarity with the victims and their families that has been harnessed.

Like the Ambassador himself said, our pressure needs to be continuous. It is working and real changes are being produced because of it.

On December 3, two days after taking over as Mexico’s new leader, President Andrés Manuel López Obrador acted on the central demand of our fall campaign.

He created a truth commission to re-examine the case of the 43 students of Ayotzinapa, whose disappearance in 2014 has yet to be resolved amid a flawed investigation and allegations of a cover-up. The truth commission, ordered in June 2018 by a Mexican federal court but blocked by the outgoing government of Enrique Peña Nieto, will be headed by the new deputy interior minister for human rights. It will start a new investigation under a special prosecutor’s office and reportedly aim to consider all leads, including those that were ignored or discarded by the former government.

As quoted inThe New York Times, President Lopez Obrador said: “I assure you there won’t be impunity in this sad and painful case.” 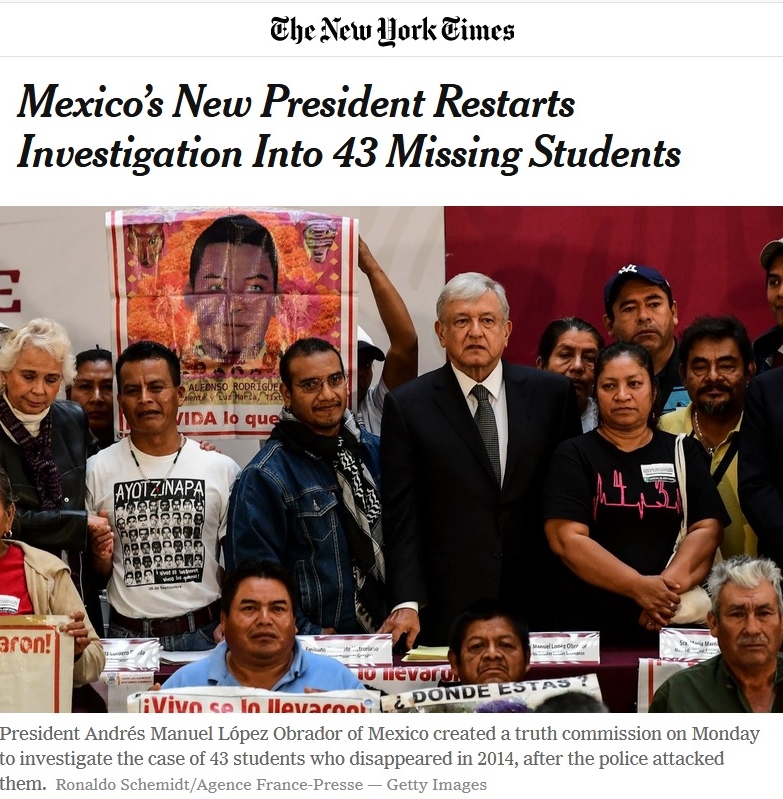