It’s an all too familiar story. The damming of a river made possible with millions of dollars of public money from Canada. It’s the story of life-changing impacts on the local ecology and on communities who rely on the river for their survival. It’s also the story of their courageous struggle to defend environmental human rights amid deadly attack. Most of all, it’s a story that cries out for attention in both Canada and Colombia in these times of climate emergency.

The massive HidroItuango dam cuts across the Cauca River in a region of Colombia hard hit by decades of armed conflict and horrendous human rights violations. 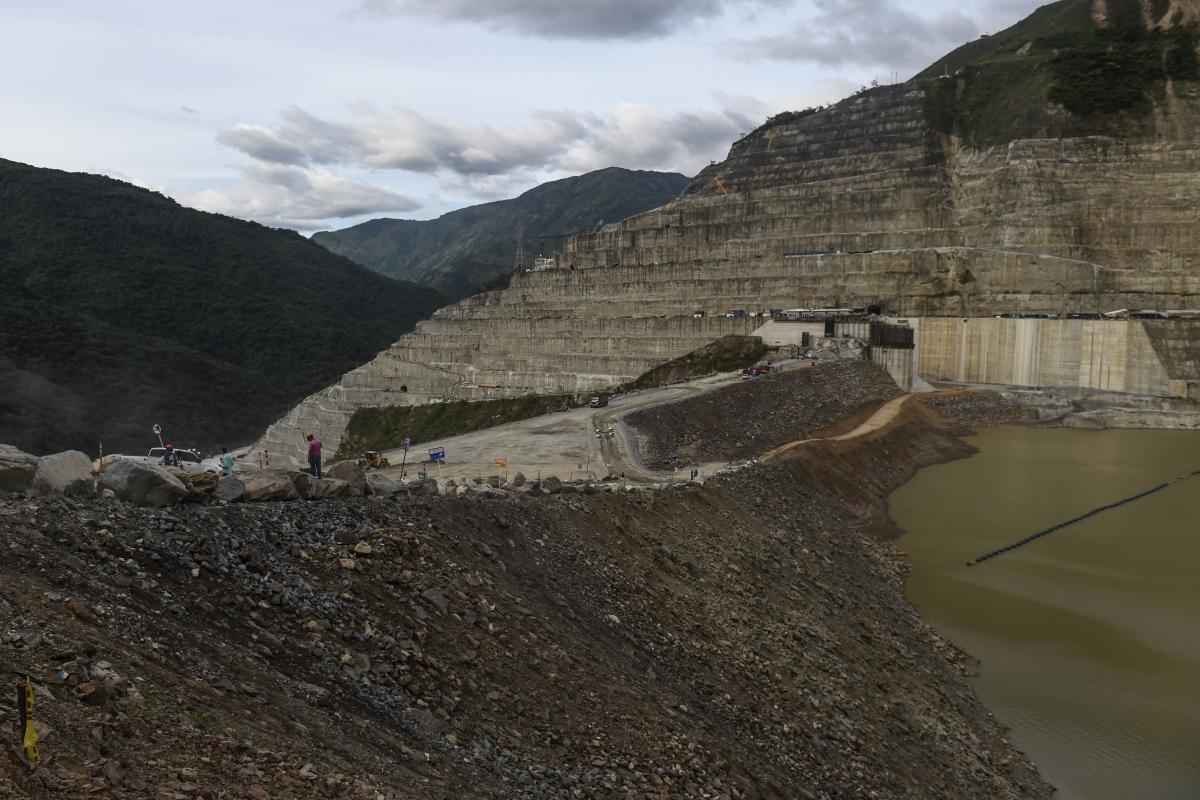 The dam was promoted as a feat of engineering that would generate nearly a fifth of Colombia’s energy needs.

Export Development Canada – a crown corporation that claims all its transactions are “environmentally and socially responsible” – approved millions of dollars in loans in 2016 to Empresas Públicas de Medellin (EPM), the company building the dam.

However, warnings were sounded about the HidroItuango dam long before Export Development Canada decided to provide financing.

In 2012, anthropologist Jorge Eliécer David Higuita published Chronicles of an imminent ethnocide in the Cauca River Canyon, an award-winning book that concluded the hydro project was “disastrous” for local communities, including the Indigenous Nutabes.

Families and communities dependent on the Cauca River for fishing or other livelihoods began to organize in a Movement called Ríos Vivos (Spanish for “living rivers”) and speak out against environmental impacts and destruction of ancestral ways of living. They also reported forced evictions, increased militarization and worsening violence. 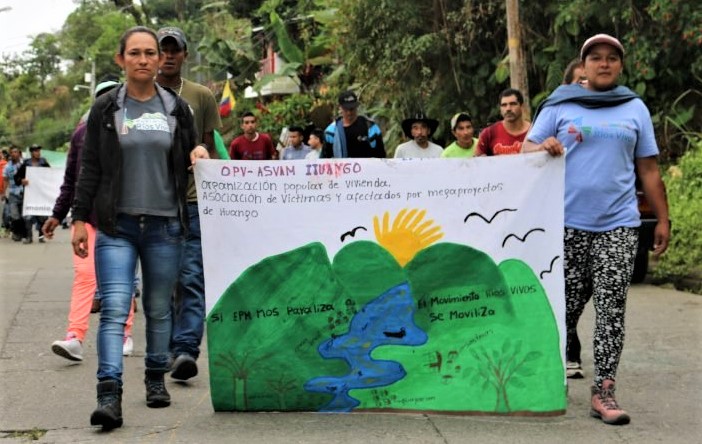 People from communities affected by the HidroItuango dam take part in a march to make visible their concerns (Photo: Movimiento Ríos Vivos)

In September 2013, the body of Ríos Vivos community leader Nelson Giraldo was found with bullet wounds and his throat cut. Amnesty International issued an Urgent Action, expressing fear for the safety of other members of Ríos Vivos and their families. “Those opposing the development of HidroItuango have repeatedly been labelled as guerrilla fighters by the security forces”, Amnesty’s appeal said, warning that that this put members of Ríos Vivos at risk of being killed or made to disappear. 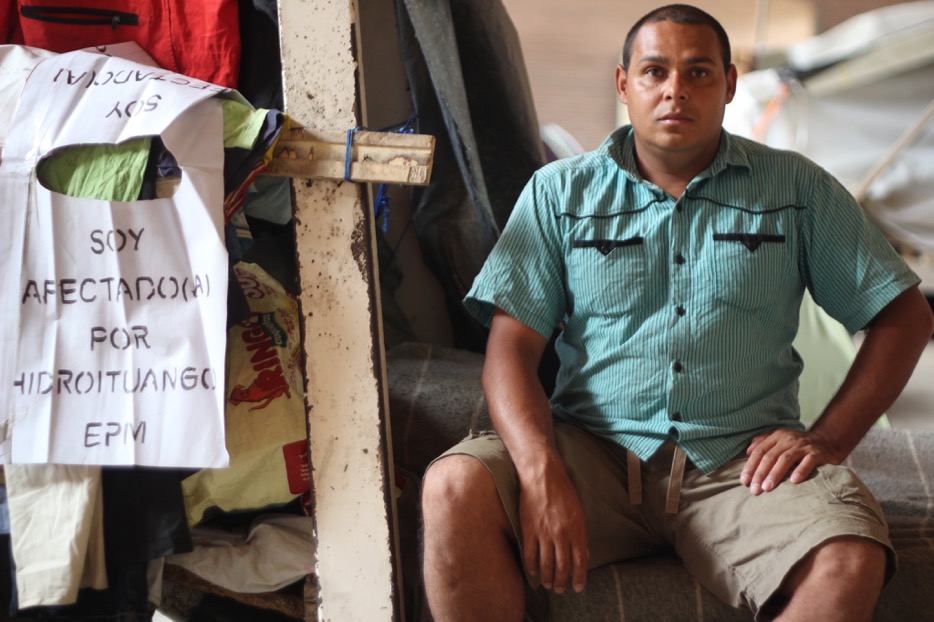 Nelson Giraldo sits beside a sign that says: “I’m affected by HidroItuango”. The member of Rios Vívos was murdered in September 2013 (Photo: Movimiento Ríos Vivos)

There have been other threats to rights and safety.

According to the Centre for International Environmental Law, HidroItuango flooded 4,500 hectares without first removing the area’s vegetation, generating large quantities of methane, a greenhouse gas. This flooding was undertaken even before the dam structure itself was completed and without informing, relocating or compensating communities in the impacted area.

These impacts were compounded in May 2018, when a water diversion tunnel – built over a year before the company obtained the required licence from environmental authorities – became obstructed.

“The tunnel’s blockage and subsequent collapse would cause the Hidroituango dam to nearly burst, endangering tens of thousands of people,” reports Amnesty International’s NGO partner Above Ground in a case study entitled EPM’s Disastrous Dam.

The resulting floods and landslides destroyed homes and forced a chaotic emergency evacuation of thousands of people. 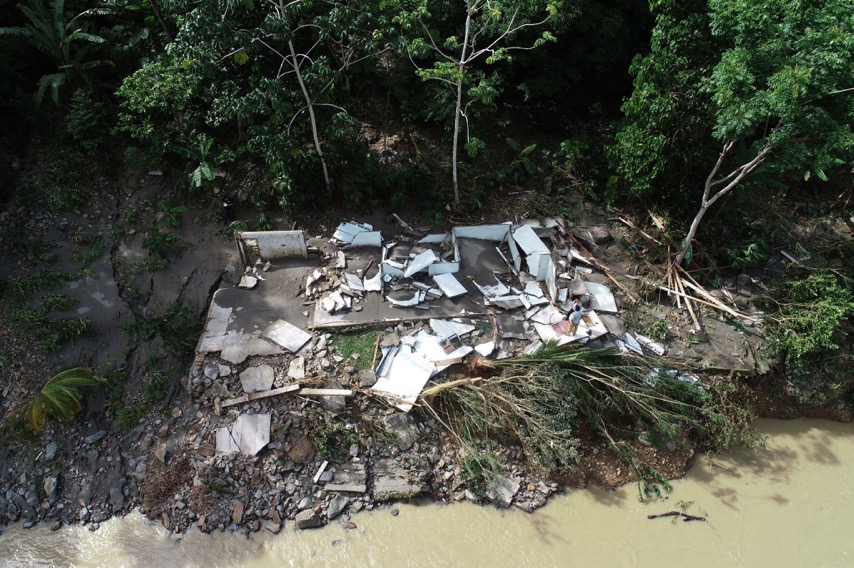 But the crisis did not end there. Amid concerns over the integrity of the dam’s structure, EPM closed two floodgates. This choked off 80% of the Cauca River’s flow, according to Above Ground, killing tens of thousands of fish. 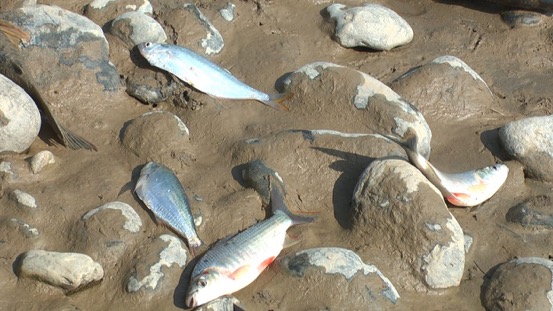 Destruction of food stocks in the Cauca River affects the food security and livelihoods of thousands of families (Photo: Movimiento Ríos Vivos)

The river defenders of Ríos Vivos say responsibility for these and other impacts of the dam lies not only with the company behind the project but also with financial institutions outside Colombia that provided funding.

Ríos Vivos spokesperson Isabel Zuleta (second from left below), raised the same concerns in a meeting with executives of Export Development Canada in Ottawa last November, accompanied by Amnesty International Canada, Above Ground, the Americas Policy Group and the Public Service Alliance of Canada.

“Without foreign money, HidroItuango would not have been possible,” Ms. Zuleta said. “Responsibility for the social and environmental harm it has caused, the exacerbation of violent conflict and the ongoing impact on our lives therefore rests with the investors as well. Six leaders of Ríos Vivos have been assassinated. Most of us have been threatened with death unless we stop speaking up. It’s a very difficult situation.”

Back in Colombia, Isabel Zuleta remains at grave risk. One anonymous message she received threatened that she would be shot in the head.

Isabel Zuleta courageously refuses to be silenced. Despite ever-present danger, she finds hope in the growing movement of people in Canada who are also determined to raise their voices for environmental human rights and those who defend them in Colombia.

Amnesty supporters in Toronto with a message in Spanish that means Solidarity from Canada with Rios Vivos (Photo: Amnesty International Canada)

“I’m absolutely sure I would not be alive today were it not for solidarity,” Isabel told Amnesty. “Every message of concern sent, every urgent action appeal, you can’t imagine how important that is for those of us who face violence in our territories. I’m enormously thankful for the support but I also urge you to press for action to ensure that money from Canada is not invested in projects that cause harm in my country. So much damage and suffering has resulted from the HidroItuango dam. We cannot allow this story to be repeated.” 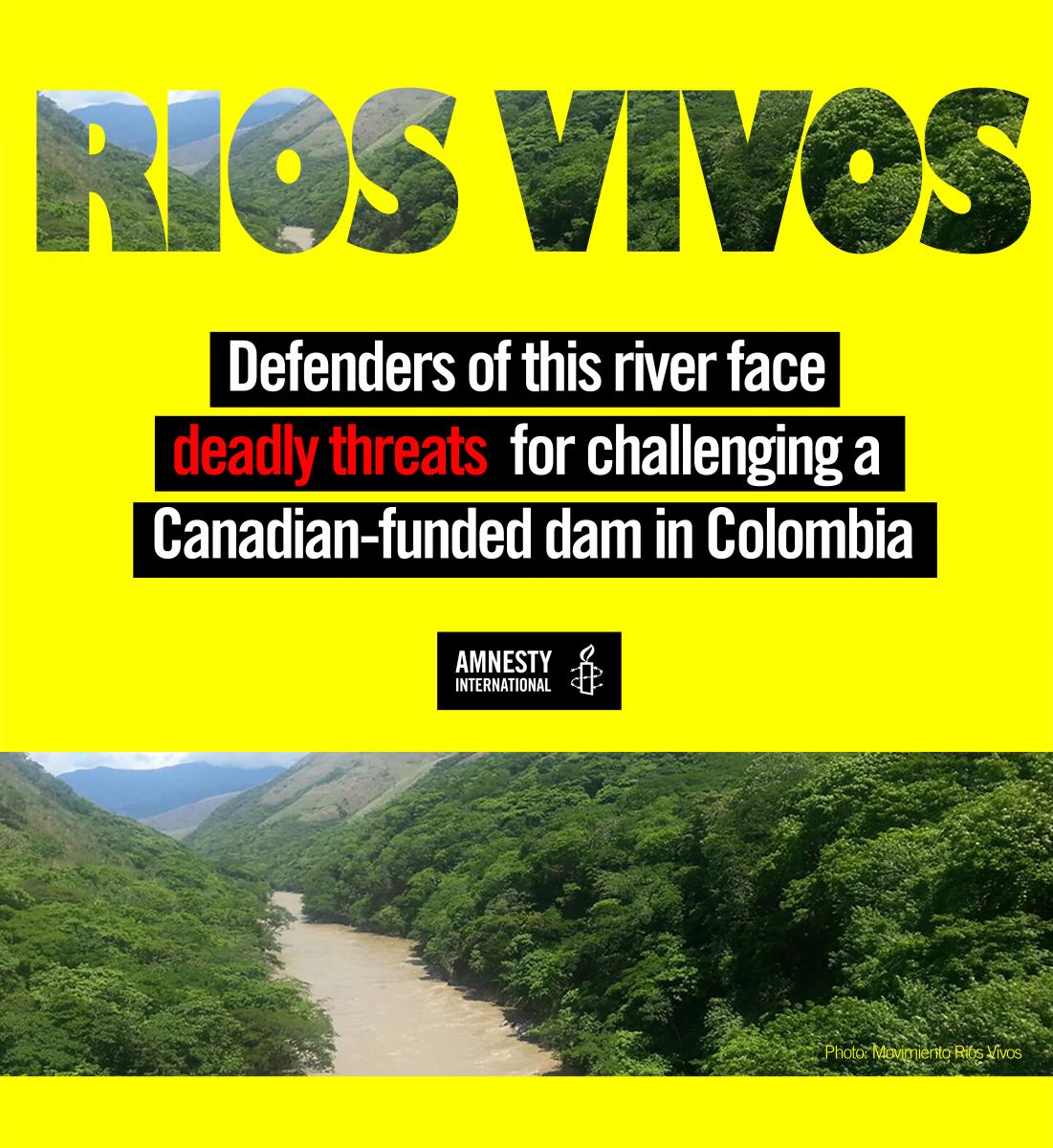 Post a message on social media. Public expressions of concern and solidarity help to protect Rios Vivos and support their demands. See a sample messages below.

3. Watch this 2-minute video to hear Rios Vivos spokesperson Isabel Zuleta explain why they are challenging the dam

Our Rios Vivos post card (see image above) calls on Colombian authorities to protect the rights and safety of threatened water defenders. Encourage friends and family to sign a post card too. Then send them back to us. We’ll deliver them in ways that will get attention. Order postcards by emailing ncameron@amnesty.ca

Call on the crown corporation to respond to the urgent calls of Ríos Vivos and take responsibility for the harms produced by its funding of the HidroItuango dam. Click here for instructions.

6. Encourage younger activists to speak up for Rios Vivos

Our letter writing action for students aged 9 and up is here. You can download a print version here

Thank you for taking this important action!