Narges Mohammadi is one of the most prominent human rights activists in Iran. Narges has campaigned in support of women’s rights and gender equality, run an organization calling for abolishment of the death penalty, served as president of the National Council of Peace in Iran, and is vice-president of the Center for Human Rights Defenders. She is a physicist, an engineer, and an avid mountain climber. She is also a prisoner of conscience serving a 22 year sentence in Iran’s notorious Evin Prison, and she desperately needs you to write a letter to Iranian authorities calling for her immediate and unconditional release. 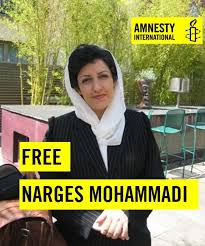 Narges is 45 years old, and she has been in and out of prison for the past 20 years solely because of her peaceful activism. Her belief in justice and equality is so strong that she has continued to publicly advocate for justice and equality despite the risks. She has given up her liberty, is separated from her family, and her health is at risk.

She suffers from a pulmonary embolism and a neurological disorder that causes seizures and temporary partial paralysis. She needs ongoing specialized medical care, which she cannot receive in prison, as well as daily medication. Her partner and children have had to leave Iran, and prison officials sometimes deny her access to telephone calls with her children as a form of punishment.

In May 2015, Narges was arrested and taken into custody to serve the remainder of a 6-year prison sentence from which she had been released early for medical reasons. While in prison she was convicted in an unfair trial of several trumped-up national security-related offenses connected with her peaceful human rights work, and was sentenced to an additional 16 years in prison. That adds up to a prison sentence of 22 years.

Narges has spent decades advocating for the rights of others. Now she needs us to advocate for her release from prison.

Sign the online action calling for the release of Narges Mohammadi.