Major electronics brands, including Apple, Samsung and Sony, are failing to do basic checks to ensure that cobalt mined by child labourers has not been used in their products, said Amnesty International and Afrewatch in a report published today.

The report, "This is what we die for: Human rights abuses in the Democratic Republic of the Congo power the global trade in cobalt", traces the sale of cobalt, used in lithium-ion batteries, from mines where children as young as seven and adults work in perilous conditions.

"The glamourous shop displays and marketing of state of the art technologies are a stark contrast to the children carrying bags of rocks, and miners in narrow manmade tunnels risking permanent lung damage," said Mark Dummett, Business & Human Rights Researcher at Amnesty International.

"Millions of people enjoy the benefits of new technologies but rarely ask how they are made. It is high time the big brands took some responsibility for the mining of the raw materials that make their lucrative products."

Amnesty International’s investigation uses investor documents to show how Huayou Cobalt and its subsidiary CDM process the cobalt before selling it to three battery component manufacturers in China and South Korea. In turn, they sell to battery makers who claim to supply technology and car companies, including Apple, Microsoft, Samsung, Sony, Daimler and Volkswagen.

Amnesty International contacted 16 multinationals who were listed as customers of the battery manufacturers listed as sourcing processed ore from Huayou Cobalt. One company admitted the connection, while four were unable to say for certain

Crucially, none provided enough details to independently verify where the cobalt in their products came from.

"It is a major paradox of the digital era that some of the world’s richest, most innovative companies are able to market incredibly sophisticated devices without being required to show where they source raw materials for their components," said Emmanuel Umpula, Afrewatch (Africa Resources Watch) Executive Director.

"The abuses in mines remain out of sight and out of mind because in today’s global marketplace consumers have no idea about the conditions at the mine, factory, and assembly line. We found that traders are buying cobalt without asking questions about how and where it was mined." 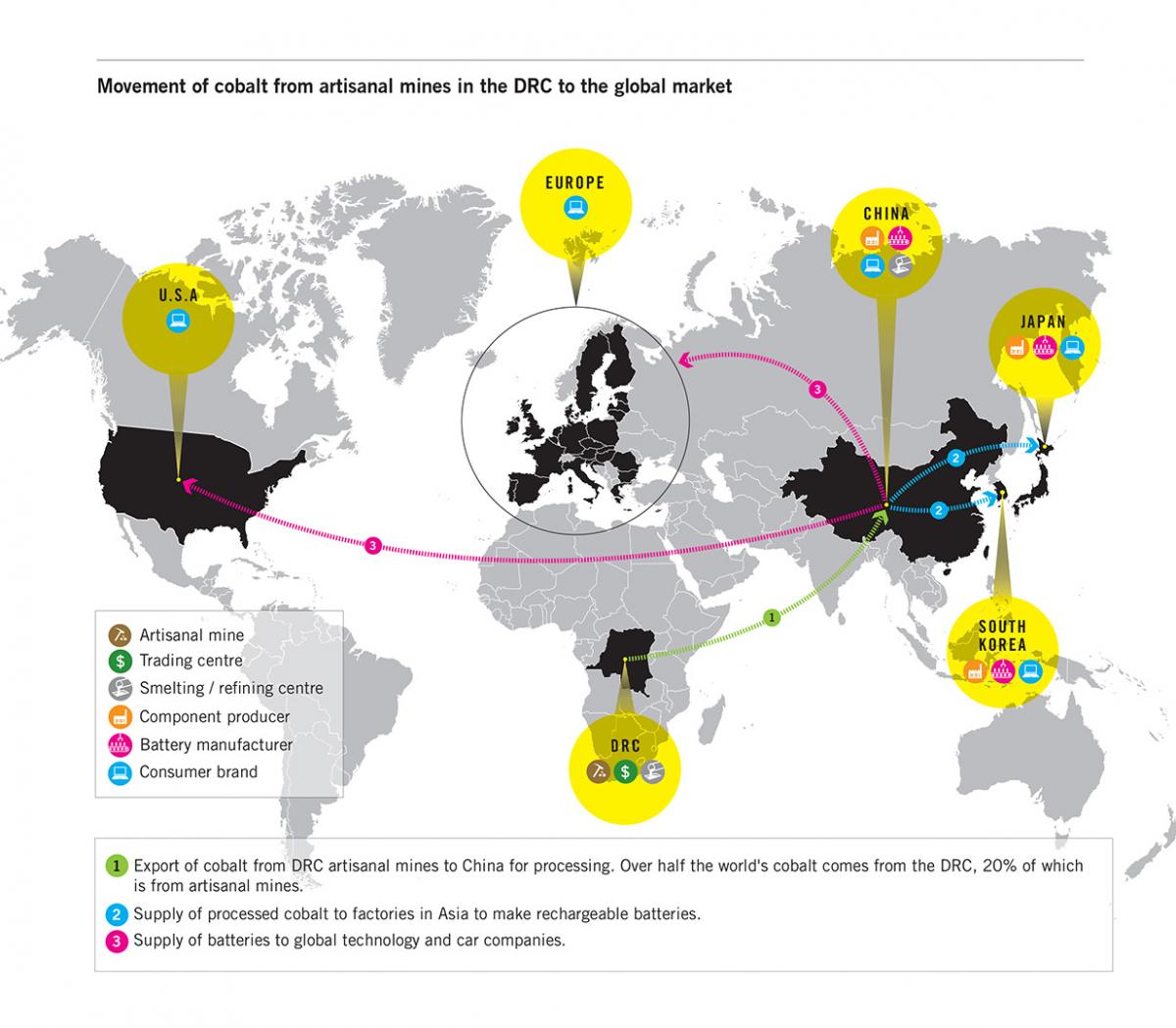 The DRC produces at least 50% of the world’s cobalt. One of the largest mineral processors in the country is Huayou Cobalt subsidiary CDM. Huayou Cobalt gets more than 40% of its cobalt from DRC.

Miners working in areas from which CDM buys cobalt face the risk of long-term health damage and a high risk of fatal accidents. At least 80 artisanal miners died underground in southern DRC between September 2014 and December 2015 alone. The true figure is unknown as many accidents go unrecorded and bodies are left buried in the rubble.

Amnesty International researchers also found that the vast majority of miners spend long hours every day working with cobalt without the most basic of protective equipment, such as gloves, work clothes or facemasks to protect them from lung or skin disease.

Children told Amnesty International they worked for up to 12 hours a day in the mines, carrying heavy loads to earn between one and two dollars a day. In 2014 approximately 40,000 children worked in mines across southern DRC, many of them mining cobalt, according to UNICEF.

Paul, a 14-year-old orphan, started mining at the age of 12. He told researchers that prolonged time underground made him constantly ill:

"I would spend 24 hours down in the tunnels. I arrived in the morning and would

leave the following morning ... I had to relieve myself down in the tunnels … My foster mother planned to send me to school, but my foster father was against it, he exploited me by making me work in the mine."

"The dangers to health and safety make mining one of the worst forms of child labour. Companies whose global profits total $125 billion cannot credibly claim that they are unable to check where key minerals in their productions come from," said Mark Dummett.

"Mining the basic materials that power an electric car or a smartphone should be a source of prosperity for miners in DRC. The reality is that it is a back-breaking life of misery for almost no money. Big brands have the power to change this."

Amnesty International and Afrewatch researchers spoke to 87 current and former cobalt miners, 17 of them children, from five mine sites in southern DRC in April and May 2015. They also interviewed 18 cobalt traders and followed vehicles of miners and traders as they carried cobalt ore from mines to markets where larger companies buy the ore. The largest of them is Huayou Cobalt’s Congolese subsidiary CDM.

Amnesty International then contacted 16 multinational consumer brands listed as direct or indirect customers of the three battery component manufacturers. None said they had been in touch with Huayou Cobalt or traced where the cobalt in their products had come from prior to Amnesty International’s contact.

The report shows that companies along the cobalt supply chain are failing to address human rights risks arising in their supply chain.

Today there is no regulation of the global cobalt market. Cobalt does not fall under existing "conflict minerals" rules in the USA, which cover gold, coltan/tantalum, tin and tungsten mined in DRC.

"Many of these multinationals say they have a zero tolerance policy for child labour. But this promise is not worth the paper it is written when the companies are not investigating their suppliers. Their claim is simply not credible," said Mark Dummett.

"Without laws that require companies to check and publicly disclose information about where they source minerals and their suppliers, companies can continue to benefit from human rights abuses. Governments must put an end to this lack of transparency, which allows companies to profit from misery."

Amnesty International and Afrewatch are calling on multinational companies who use lithium-ion batteries in their products to conduct human rights due diligence, investigate whether the cobalt is extracted under hazardous conditions or with child labour, and be more transparent about their suppliers.

The organizations are also calling on China to require Chinese extractive companies operating overseas to investigate their supply chains and address human rights abuses in their operations. The organizations say Huayou Cobalt should confirm who is involved in mining and trading its cobalt (and where) and make sure it is not buying cobalt mined by child labour or in dangerous conditions.

"Companies must not simply discontinue a trading relationship with a supplier or embargo DRC cobalt once human rights risks have been identified in the supply chain. They must take remedial action on the harm suffered by people whose human rights were abused," said Mark Dummett.

A full list of the companies investigated and their responses is available in the annex of the report.

Amnesty Report This is what we die for: Human rights abuses in the Democratic Republic of the Congo power the global trade in cobalt