Myanmar: Students’ release must pave way for an end to repression

The release of dozens of student protesters in Myanmar is a step forward for human rights that should pave the way for the new government to release all remaining prisoners of conscience and amend or repeal all laws that fuel arbitrary arrests, Amnesty International said.

The Tharawaddy Court in Myanmar today dropped charges against scores of students facing jail for largely peaceful protests in March 2015. The move came after the new government announced on 7 April that it would work to release all prisoners of conscience as soon as possible.

“Today’s release of most of the student protesters is a huge step forward for human rights in Myanmar, and we are delighted that these men and women will walk free. It sends a strong message about the new government’s intention to end the cycle of political arrest and detention in Myanmar. We are now looking forward to the release of all other prisoners of conscience - including those students who are facing charges in other courts. The new government must ensure that no prisoner of conscience is left in jail,” said Laura Haigh, Amnesty International’s Myanmar Researcher.

“Of course, a prisoner release is only a first step – the NLD must also reform the country’s repressive legal framework, which has for too long been used to clamp down on dissent. As long as these laws remain on the books, human rights defenders and activists will remain at risk of being jailed simply for expressing their opinions. Thankfully, the NLD has acknowledged the need to repeal and amend repressive laws, and we are looking forward to seeing the government following up on this.

“The new administration must also aim to ensure support and rehabilitation for those released in today’s amnesty, along with the many others before them who were unjustly imprisoned.” 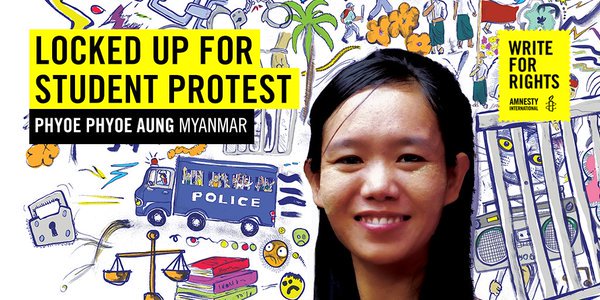 At least five student leaders who are facing charges in other courts remain in detention while they wait for the charges to be dropped. They are Phyoe Phyoe Aung, James (aka Lin Htet Naing), Nandar Sitt Aung, Kyaw Ko Ko and Myint Thwe Thit.

On 24 March 2016, Amnesty International published a report on political imprisonment in Myanmar which highlighted the worrying erosion of newly found freedoms of expression, association and peaceful assembly in the country since the start of 2014. Since then, hundreds of people have been arrested, charged, arbitrarily detained or imprisoned in politically motivated cases. They include student protesters, political activists, media workers, human rights defenders and, in particular, land and labour activists.

New expression meets old repression: ending the cycle of political arrest and imprisonment in Myanmar is available at: https://www.amnesty.org/en/documents/asa16/3430/2016/en/