The vast majority of people (80%) would welcome refugees with open arms, with many even prepared to take them into their own homes, according to a global survey commissioned by Amnesty International.

The new Refugees Welcome Index, based on a global survey of more than 27,000 people carried out by the internationally renowned strategy consultancy GlobeScan, ranks 27 countries across all continents based on people’s willingness to let refugees live in their countries, towns, neighbourhoods and homes.

The survey shows people say they are willing to go to astonishing lengths to make refugees welcome. It also shows how anti-refugee political rhetoric is out of kilter with public opinion.

“These figures speak for themselves. People are ready to make refugees welcome, but governments’ inhumane responses to the refugee crisis are badly out of touch with the views of their own citizens,” said Amnesty International Secretary General Salil Shetty.

“The Refugees Welcome Index exposes the shameful way governments have played short term politics with the lives of people fleeing war and repression. Governments must heed these results, which clearly show the vast majority of people ready and willing to make refugees welcome in their country.

“Governments cannot allow their response to the refugee crisis to be held hostage by headlines. Too often they use xenophobic anti-refugee rhetoric to chase approval ratings. This survey suggests they are not listening to the silent majority of welcoming citizens who take the refugee crisis personally.” 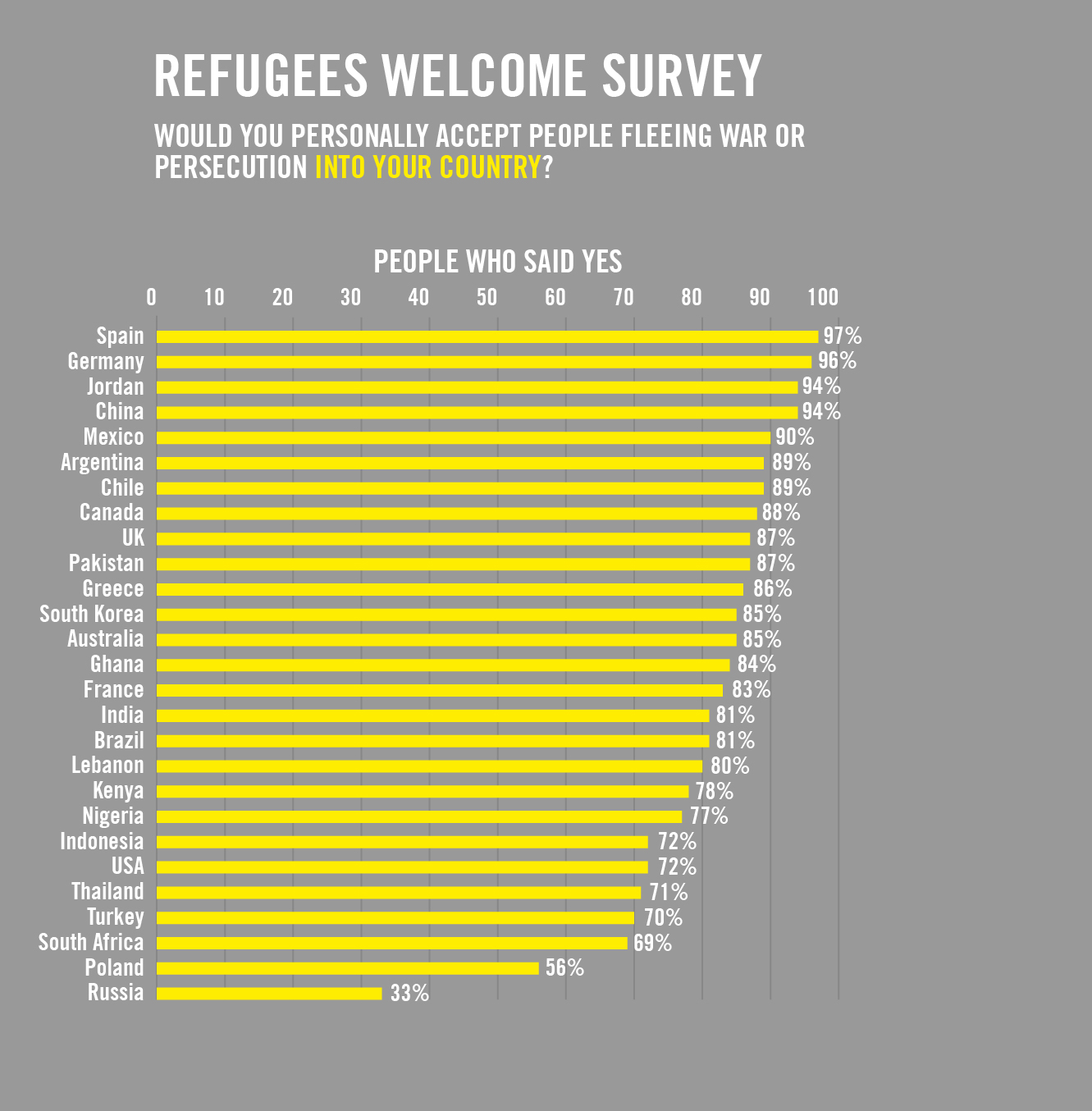 China tops the Refugees Welcome Index, followed by Germany and the UK. The countries that scored lowest were Russia, Indonesia and Thailand.

Just under half of people surveyed in China (46%) said they would accept refugees into their own home.

People in the UK are the second-most willing to make refugees welcome in their own homes (29%). On top of that, another 47% said they would accept refugees into their neighbourhood. The vast majority of people in the UK (87%) would let refugees into the UK. Canada had a high ranking of endorsing the right of those fleeing war or persecution to seek sanctuary in other countries that is the 3rd highest in the world.

People in several countries who have already accepted large numbers of refugees show no signs of flagging acceptance, with Greece and Jordan joining Germany in the top 10 of the Index.

The Refugees Welcome Index was prepared by asking 27,000 people in 27 countries how closely they would accept refugees on a sliding scale: in their home, their neighbourhood, their city/town/village or in their country – or if they would refuse them entry to the country altogether.

The survey used to construct the Index also asked two other questions about access to asylum and current refugee policies.

Governments should do more to help refugees:

“We did not expect to see such strong levels of solidarity with refugees, but the results reflect the inspiring human compassion people feel to those fleeing war. They want to do what they can to help, not turn their backs. Politicians need to show the same spirit,” said Salil Shetty.

“People seem to be more committed to principles set down in international law than many of their governments, who are increasingly tearing up or ignoring commitments that have stood for 65 years.”

To respond to the global refugee crisis, Amnesty International is calling on governments to resettle 1.2 million refugees by the end of 2017. That is far more than the 100,000 per year governments are currently taking annually, but less than a tenth of the 19.5 million refugees in the world today.

Amnesty International is also calling for governments at next week’s World Humanitarian Summit in Istanbul on 23-24 May to commit to a new, permanent system for sharing the responsibility to host and assist refugees. This “Global Compact on responsibility-sharing” already proposed by the UN on 9 May, would then be adopted at a high-level UN summit of world leaders on 19 September. UN Secretary-General Ban Ki-moon is convening both summits to address the biggest humanitarian and refugee crises in 70 years.

Governments at the World Humanitarian Summit must also address the $15 billion shortfall in humanitarian funding highlighted by the UN at the start of 2016, putting forward more money to support both refugees and the countries hosting large numbers of refugees.

“Governments’ efforts to keep out people fleeing war and persecution fly in the face of the humanity and solidarity shown by their own citizens, not to mention their obligations under international law. Refugees should be helped, protected and welcomed into communities, not held at arm’s length in refugee camps and detention centres,” said Salil Shetty.

“Politicians should stop pandering to intolerance and division, and listen to their people who want to help their fellow human beings. They must address the shameful imbalance that sees 86% of the world’s refugees welcomed by the world’s poorer countries while the wealthy ones renege on their responsibilities.”

Background: How the Refugees Welcome Index was developed

The Index is calculated by giving countries a score based on the average of responses to the question, "How closely would you personally accept people fleeing war or persecution?" Responses were scaled to 100 as follows: 0 = ‘I would refuse them entry to my country’; 33 = ‘I would accept them in my country’; 67 = ‘In my city/town/village’; and 100 = ‘In my neighbourhood or household’.

“We designed the survey and Index to reflect the complexity of the refugee issue. People are grappling with multiple political and emotional arguments and we wanted to get their views as humans responding to a humanitarian crisis,” said Caroline Holme, Director at GlobeScan.

Note: Typically, differences between countries of 5 points or above are statistically significant

About GlobeScan GlobeScan is a strategy consultancy specializing in stakeholder intelligence and engagement in the areas of reputation, sustainability and purpose. We help global companies, multilateral organizations and international NGOs build stronger, more trusting relationships with their stakeholders to deliver long-term success.   GlobeScan conducts research in over 90 countries and is a signatory to the UN Global Compact.  Established in 1987, GlobeScan is an independent, management-owned company with offices in Toronto, London, San Francisco, Cape Town, São Paulo and Hong Kong. For more information, please visit www.GlobeScan.com