The Amnesty International ad was published in the Dec. 6 print edition of the Montreal Gazette to promote Write for Rights, the organization’s annual global letter-writing campaign. Write for Rights takes place every year around Dec. 10, International Human Rights Day, and profiles 10 cases of individuals and communities who are facing human rights violations. The ad focused on Janna Jihad, a 15-year-old Palestinian activist who faces threats and intimidation for documenting the Israeli army’s treatment of Palestinians.

Amnesty International was only made aware of the apology after its publication in the pro-Israel blog. Postmedia did not contact Amnesty International to voice any concerns with the ad. According to the published apology, which Amnesty has since confirmed with Postmedia, the company’s sales staff across the country were mandated to attend training sessions due to the publication of the ad.

“It is concerning that Postmedia has bowed to external pressure and apologized for two lines about an outspoken young Palestinian girl and activist. This is shocking and further silences a young teenage girl who has won the admiration of the world for her remarkable courage and citizen journalism,” said Ketty Nivyabandi, Secretary General of Amnesty International Canada’s English section. “Postmedia fell sway to a concerted lobbying campaign that precisely aims to silence Palestinian voices like Janna’s. Postmedia is a major daily newspaper publisher in Canada; its response should concern everyone in this country.” 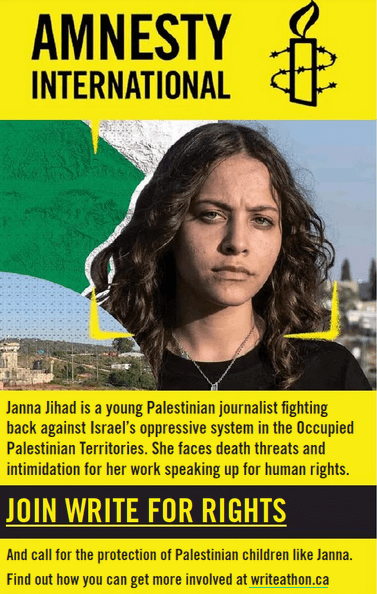 Amnesty International’s advertisement highlighting the case of Janna Jihad, a young Palestinian journalist and activist, which appeared in the Dec. 6 print edition of the Montreal Gazette.

“We rely on advertisements in well-established traditional media outlets – such as those owned by Postmedia – to help raise awareness of human rights violations around the world,” said France-Isabelle Langlois, Executive Director of Amnistie Internationale Canada Francophone. “Postmedia has issued this apology ahead of International Human Rights Day, a time of year when we make a concerted push to mobilize people to act in solidarity with those who are facing human rights violations.”

On Friday, Dec. 10, Amnesty International will be hosting a virtual Write for Rights marathon, which will feature a full day of programming, including a presentation of Janna Jihad’s case. For more information on the event, and how to take part, visit www.writeathon.ca.

Amnesty International is a global movement of more than 10 million supporters, members and activists in over 150 countries and territories who campaign to end grave abuses of human rights.

Our vision is for all people to enjoy all the rights enshrined in the Universal Declaration of Human Rights and other international human rights standards.

We are independent of any government, political ideology, economic interest or religion, and are funded mainly by our membership.