Escalating violations, including possible war crimes, that have sparked a humanitarian crisis amid Yemen’s armed conflict will only worsen unless all states immediately impose a comprehensive embargo on arms transfers that could be used by any of the warring parties, Amnesty International warned today as a meeting on the Arms Trade Treaty (ATT) got under way in Geneva.

ATT States Parties and signatories are among those who continue to supply weapons to Saudi Arabia and its coalition partners for use in Yemen – in brazen violation of the treaty, in particular its human rights provisions. Arms have also been diverted into the hands of Huthi and other armed groups fighting in Yemen.

“The world has not only turned its back on the people of Yemen; many states have actually contributed to their suffering, supplying the weapons and bombs that have been used to unlawfully kill and injure civilians and destroy homes and infrastructure. This has caused a humanitarian catastrophe,” said Brian Wood, Head of Arms Control and Human Rights at Amnesty International.

“All states, as well as international organizations such as the European Union and United Nations, should do everything in their power to prevent this terrible humanitarian toll from worsening further. A vital first step would be immediately turning off the taps on the irresponsible and unlawful flow of arms that could be used in the conflict in Yemen.”

Amnesty International has documented how, since the conflict erupted last March, all sides have committed a string of serious violations of international humanitarian and human rights law, including possible war crimes, with impunity. This has contributed to the deaths of nearly 3,000 civilians, including at least 700 children, has injured more than 5,600 and displaced upwards of 2.5 million people. 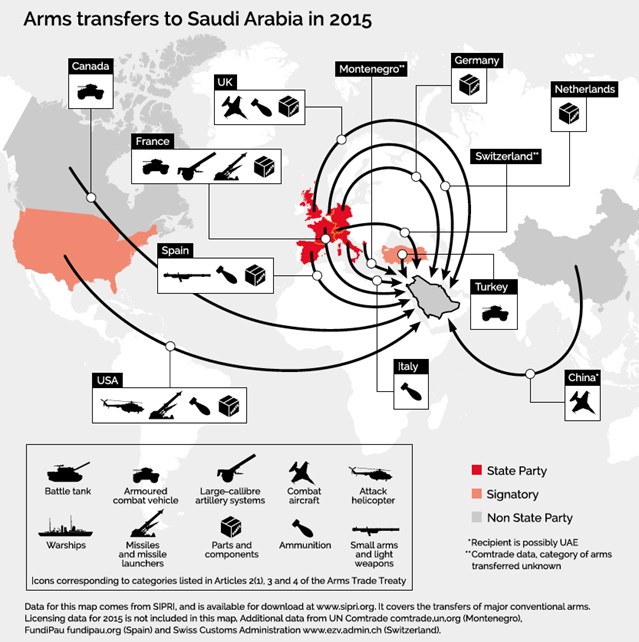 The need for an arms embargo
Amnesty International is urging all states to ensure that no party to the conflict in Yemen is supplied – either directly or indirectly – with weapons, munitions, military equipment or technology that would be used in the conflict until they end such serious violations. This also applies to logistical and financial support for such transfers.

The embargo call goes far beyond existing international sanctions on parties to the conflict in Yemen. UN Security Council Resolution 2216, adopted in April 2015, imposed an arms embargo on Huthi/Saleh loyalist forces only. A non-binding European Parliament resolution adopted on 25 February called for the EU to seek to impose an arms embargo on Saudi Arabia, but not other parties to the conflict.

Amnesty International is calling for any authorization of arms transfers to any party to the Yemen conflict to include a strict, legally binding guarantee that the end use will be in line with international humanitarian and human rights law, and that such arms transfers will not be used in Yemen. States should explicitly inform the UN Sanctions Committee of the terms of any such transfers and end-use guarantees.

The organization is not calling for a total ban on coalition members acquiring arms lawfully for legitimate uses outside Yemen – for example, arms used for the protection of humanitarian aid or participation in peacekeeping operations.

An arms embargo would effectively rule out any arms transfer to any party to the conflict for use in Yemen while there remains a substantial risk the arms would be used to commit or facilitate war crimes or other serious violations.

States Parties to the ATT – including all EU member states – should already be implementing such end-use guarantees under their treaty obligations.

It is crucial that the embargo covers not only weapons and munitions used in aerial attacks such as military aircraft, missiles and bombs, but also equipment used in ground attacks by Huthi and coalition-aligned armed groups and militias in Yemen, such as imprecise Grad-type rocket artillery, as well as mortars, small arms and light weapons and other equipment such as armoured vehicles.

Among the arms transfers Amnesty International believes should be suspended in the current context is Canada`s $15 billion multi-year deal to sell Light Armoured Vehicles (LAVs) to Saudi Arabia. As the conflict in Yemen continued and intensified, the organization became increasingly concerned that the LAVs transferred in previous years could be used to support ground attacks. Images posted on social media by the Saudi Arabian National Guard (but not verified by Amnesty International) appear to confirm that Canadian-made LAVs were moved to the volatile border area with Yemen months ago.

Possible war crimes on both sides
Since the start of the conflict in March 2015, Amnesty International has documented 30 airstrikes across five different governorates (Sana’a, Sa’da, Hajjah, Ta’iz and Lahj) by the Saudi Arabia-led coalition that appear to have violated international humanitarian law, resulting in 366 civilian deaths (more than half of whom were women and children) and 272 civilian injuries. These have included attacks on hospitals, schools, markets and mosques, which may constitute war crimes.

Amnesty International has also investigated 30 indiscriminate or reckless ground attacks by Huthi/Saleh-loyalist forces in the southern cities of Aden and Ta’iz which killed at least 68 civilians and injured 99 others (most of whom were women and children). Imprecise battlefield weapons are used on a daily basis in residential areas, causing civilian casualties and showing disregard for civilian lives. Such indiscriminate attacks violate the laws of war.

Amnesty International has also documented the Saudi Arabia-led coalition’s use of at least four different types of internationally banned cluster munitions (including US and Brazilian-manufactured models) in at least five attacks in three governorates of Yemen since March 2015. The latest attack documented took place in Sana’a on 6 January, killing a 16-year-old boy and wounding at least six other civilians. Cluster munitions are indiscriminate weapons that pose long-term dangers to civilians and their use is prohibited.

“The fighting in Yemen has resulted in a catalogue of horrors for the civilian population. The warring parties are directly to blame for flagrantly flouting international humanitarian law and failing to take adequate measures to protect civilians and their human rights,” said Brian Wood.

“But the international community has also played a significant part in this, by continuing to supply billions of dollars’ worth of arms to the Saudi Arabia-led coalition, despite clear evidence of an overriding risk that they would be used to commit serious violations.

“Stopping the flow of arms to all parties to the Yemen conflict must be accompanied by the establishment of an international inquiry to conduct credible, independent investigations into the serious violations of international humanitarian and human rights law by all parties.”