Thousands of civilians trapped in Raqqa, northern Syria, are coming under fire from all sides as the battle for control of the city enters its final stage, Amnesty International said following an in-depth investigation on the ground. The warring parties must prioritize protecting them from hostilities and creating safe ways for them to flee the frontline.

In a report released today, the organization documents how hundreds of civilians have been killed and injured since an offensive began in June to recapture the “capital” and main stronghold of the armed group calling itself Islamic State (IS).

Survivors and witnesses told Amnesty International that they faced IS booby traps and snipers targeting anyone trying to flee, as well as a constant barrage of artillery strikes and airstrikes by the US-led coalition forces fighting alongside the Syrian Democratic Forces (SDF) armed group. At the same time, survivors recounted how Russian-backed Syrian government forces also bombarded civilians in villages and camps south of the river, including with internationally banned cluster bombs.

“As the battle to wrest Raqqa from Islamic State intensifies, thousands of civilians are trapped in a deadly labyrinth where they are under fire from all sides. Knowing that IS use civilians as human shields, SDF and US forces must redouble efforts to protect civilians, notably by avoiding disproportionate or indiscriminate strikes and creating safe exit routes,” said Donatella Rovera, Senior Crisis Response Adviser at Amnesty International, who led the on-the-ground investigation.

“Things will only get more dangerous as the battle reaches its final stages in the city centre. More can and must be done to preserve the lives of civilians trapped in the conflict and to facilitate their safe passage away from the battleground.”

On 6 June, the SDF and coalition forces launched the final phase of their operation to recapture Raqqa from IS control. In mid-July, Russian-backed Syrian forces began launching airstrikes in villages and camps for displaced people south of the city. Hundreds of civilians have been killed and injured in attacks from all sides since these new offensives began.

It is unknown how many civilians remain trapped inside Raqqa, with UN estimates ranging from 10,000 to 50,000. Many, possibly most, are believed to be holed up as human shields in the Old City and other IS-controlled areas.

The ‘hell’ of relentless shelling

Civilians still trapped in Raqqa are in grave danger from the intense artillery shelling and more limited airstrikes by the coalition forces, on the basis of coordinates provided by SDF forces fighting on the ground.

Numerous recent escapees told Amnesty International how these relentless and often imprecise attacks resulted in a surge of civilian casualties in recent weeks and months.

Daraiya, west of Raqqa’s city centre, is one area that was heavily bombarded by coalition forces, including from 8-10 June.

One Daraiya resident said: “It was hell, many shells struck the area. Residents did not know how to save themselves. Some people ran from one place to another… only to be bombed there. Didn’t the SDF and the coalition know that the place was full of civilians? We were stuck there… because Daesh [IS] didn’t let us leave.”

Another described how a dozen shells struck a residential area of single-storey houses in Daraiya on 10 June, killing at least 12 people across several homes, including a 75-year-old man and an 18-month-old baby: “The shells struck one house after the other. It was indescribable, it was like the end of the world – the noise, people screaming. I [will never] forget this carnage.”

Survivors also told Amnesty International that coalition forces have been targeting boats crossing the Euphrates River, one of the only viable escape routes for civilians trying to flee the city.

On 2 July, the coalition commander, US Lt. Gen. Stephen J. Townsend, told the New York Times: “We shoot every boat we find”. Coalition forces also dropped leaflets in March 2017, warning: “Daesh is using boats and ferries to transport weapons and fighters – do not use ferries and boats, airstrikes are coming.”

“Crossing the river has been a key escape route for civilians fleeing the conflict in Raqqa, so striking ‘every boat' – on the erroneous assumption that any boat will be carrying IS fighters or weapons – is indiscriminate and prohibited by the laws of war,” said Donatella Rovera. 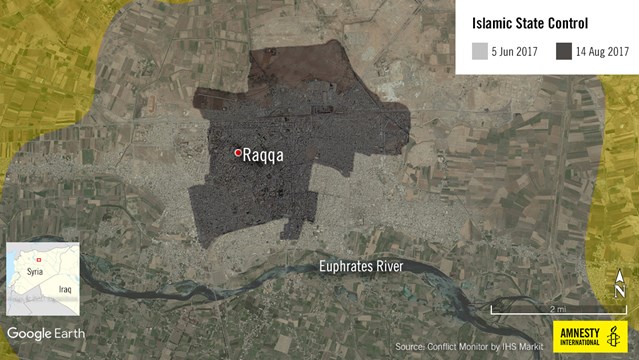 Map showing the extent of areas in Raqqa recaptured from IS since June 2017. © Amnesty International/Source: Conflict Monitor by IHS Markit

IS has been using multiple tactics to prevent civilians from fleeing Raqqa, effectively using them as human shields. IS fighters have been laying landmines and booby traps along exit routes, setting up checkpoints around the city to restrict movement, and shooting at those trying to sneak out.

With the frontline constantly shifting, civilians are at grave risk.

Mahmouda, a resident who fled the Daraiya area, told Amnesty International: “It was a terrible situation … IS wouldn’t let us leave. We had no food, no electricity. There were lots of spies for the religious police. They besieged us with snipers. If you get hit by a sniper, you die in your house. There were no doctors.”

As the battle enters its final stage, the situation for civilians is worsening.

Reem, also from Daraiya, explained how IS fighters began forcing people to move within the walls of the Old City, where they are expected to make a final stand: “They [IS] came to knock on our door and told us we had half an hour to get to the Old City. If you refused they accused you of being a PKK [Kurdish Workers Party] agent and threatened to take you to the prison.”

“By embedding themselves in civilian areas of Raqqa and using civilians as human shields, IS fighters are adding to their brutal track record of systematically and flagrantly flouting the laws of war,” said Donatella Rovera.

While civilians in Raqqa city have been bearing the brunt of the fighting, villagers in IS-controlled areas south of the Euphrates have faced a separate onslaught as Russian-backed Syrian government forces launched indiscriminate airstrikes in the second half of July, killing at least 18 civilians and injuring many more

Survivors’ detailed description of the strikes to Amnesty International indicate that Syrian government forces have dropped internationally banned cluster munitions as well as unguided bombs on areas where civilians displaced by the conflict were sheltering in makeshift camps along irrigation canals near the Euphrates.

Several eyewitnesses told the organization how Russian forces dropped four cluster bombs on Sabkha Camp on 23 July, killing around 10 civilians, among them an 18-month-old baby. Thirty others were injured.

“We know they were cluster bombs because it was not one big explosion in one place; there were many small explosions over a very large area. The explosions set the tents on fire, so we lost everything,” said Zahra al-Mula, who lost four relatives in the attack.

The next day, more cluster bombs were fired at Shuraiyda camp, two kilometres to the east. Amnesty International visited survivors at a local hospital, including Usama, a 14-year-old boy who sustained massive injuries to the abdomen and limbs. He lost seven relatives in the attack.

“Those besieged in Raqqa face horrific brutality at the hands of IS – of that there is no doubt. But violations by IS do not lessen the international legal obligations of other warring parties to protect civilians. This includes selecting lawful targets, avoiding indiscriminate or disproportionate strikes, and taking all feasible precautions to minimize harm to civilians,” said Donatella Rovera.