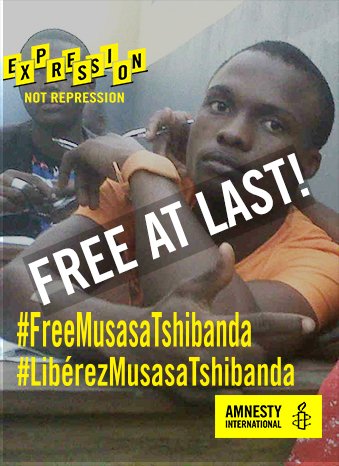 Amnesty International sent this case as an Urgent Action on December 19 2016.

Musasa Tshibanda, an activist from the youth movement Lutte pour le Changement (LUCHA) in the Democratic Republic of Congo (DRC), was released on 8 February. He was not charged. He had been in incommunicado detention since 16 December 2016 when he was arrested together with another activist, Gloria Senga.

Musasa Tshibanda was released without charge on 8 February after being detained incommunicado since his arrest. Together with fellow LUCHA activist, Gloria Senga, he was arrested by the Republican Guard on the evening of 16 December 2016 after a meeting they held with another activist in a restaurant in Kinshasa, DRC. The Republican Guards reproached Musasa Tshibanda for being in possession of red cards which read ‘Bye Bye Kabila’. The ‘Bye Bye Kabila’ campaign was launched by LUCHA on 25 October 2016, to call on President Joseph Kabila to leave office on 19 December 2016, the last day of his second term in office. According to DRC’s Constitution, a president is limited to two terms in office.

After their arrest, the two LUCHA activists were taken to Camp Tshatshi, a military detention facility in Kinshasa, where they spent 11 days in incommunicado detention. They were transferred to the National Intelligence Agency (Agence National de Renseignement, ANR) detention facilities in Kinshasa on 26 December 2016. Gloria Senga was released on 27 December 2016, while Musasa Tshibanda remained there in incommunicado detention.