Hamid Ahmadi's execution has been stayed! 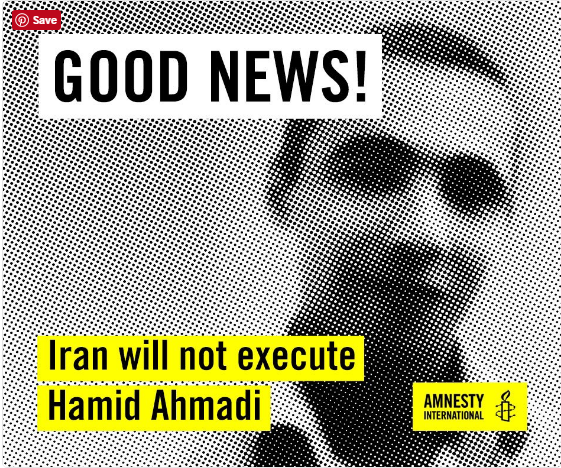 We have just learned that Hamid Ahmadi’s execution has been stayed. The authorities have informed his family that they have stopped all plans to execute him.

We understand that this development has come about because the Iranian authorities have felt the pressure from huge public campaigning and private advocacy efforts, spearheaded by Amnesty International.

Thank you to everyone for your support. We will continue monitoring Hamid Ahmadi’s situation to ensure that the Iranian authorities stay true to their word.

Hamid Ahmadi, who was due to be executed on Saturday 11 February has been given until this Saturday 18 February to convince the family of the man he is accused of killing to forgive him and, therefore, avoid the death penalty.

Tortured into a 'Confession'

Back in 2008 Hamid was found guilty of stabbing a young man during a fight that broke out amongst five boys in the city of Siahkal, Gilan Province in Iran.

At the police station he was not allowed access to his family or to a lawyer, and instead, he was tortured until he ‘confessed’.

On 28 January, he was moved to solitary confinement in Lakan prison in the city of Rasht, Gilan Province, where he is imprisoned, in preparation for his execution.

He was initially scheduled to be executed on 4 February. On 2 February, his family were informed that his execution had been postponed by a week and would take place on Saturday 11 February.

Over the past month the Iranian authorities have executed two young men arrested as children. We have recorded at least 77 executions of juvenile offenders between 2005 and 2017.

According to a UN report issued in 2014, at least 160 juvenile offenders are now on death row - some of them have been on death row for over a decade. They are either unaware of their right to seek a retrial based on the new provisions of the 2013 Islamic Penal Code or do not have the means to retain a lawyer to seek it for them.