We are thrilled to announce that our colleague, Taner Kılıç, Honorary Chair of Amnesty Turkey, has been released from jail today after over 432 days in prison.

“We are overjoyed at this news. It has taken us more than a year of campaigning and struggle to get here, but it appears that Taner will finally be freed." Kumi Naidoo, Amnesty International’s new Secretary General.

Millions of people worldwide have taken action on this case, which has no doubt pressured the authorities, helping to secure Taner’s release.

Thank you to all of those who sent messages of solidarity for Taner as part of Write for Rights 2017!

In Canada and thanks to the support of people like you, we have spoken up for Taner:

This morning we used the cold snowy weather to send a solidarity message to @aforgutu Chair Taner Kilic. Releasing a man, and then re-arresting him is a cruel punishment, especially when no crime was commited in the first place #FreeTaner pic.twitter.com/cFj2PS9nGA 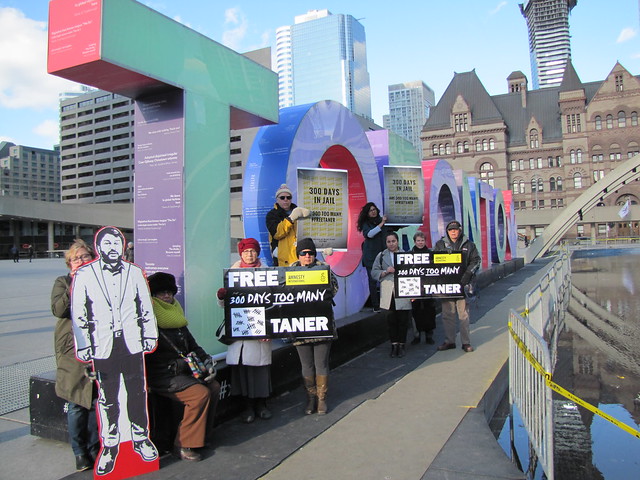 June 2018. Demonstration outside of the Turkish Embassy to mark one year of Taner’s imprisonment

This morning we sent representatives of #Turkey in #Ottawa a message #FreeTaner pic.twitter.com/g0PPZrak5I

Taner Kılıç and the Istanbul 10

Taner was arrested on 6 June last year and sent to jail three days later, where he has languished until today.

Ten other activists known as “The Istanbul 10”, including Amnesty Turkey’s Director İdil Eser, were locked up a month later. Eight of them were held for almost four months before being released on bail at their first hearing in October.

They all face the same baseless charge – “membership of a terrorist organisation” – a ridiculous claim made time and time again by the Turkish government to justify its attempt to silence human rights defenders.

Since the attempted coup of July 2016, 150,000 people have accused of dealings with the “Fethullah Terrorist Organisation”, which the Turkish government claims to be behind the rebellion.

Some 50,000 people are currently jailed, including at least 100 journalists – the highest number of any country in the world. What’s more, over 100,000 public sector workers, including a quarter of the judiciary and hundreds of academics, have been arbitrarily dismissed.