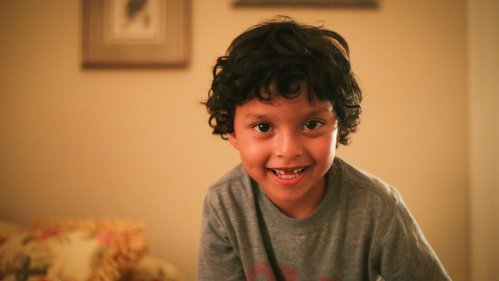 Photo: Four-year-old Carlos spent nearly half his life in immigration detention in the U.S. with his mother, Lorena. Now he and three other children and their mothers are free!

No child should grow up behind bars. But thanks to Amnesty supporters, courageous lawyers and activists on the ground, four children and their mothers are finally free after nearly 700 days in an immigration detention center in the United States!

On 17 August, four-year-old Carlos and 16-year-old Michael along with their mothers, Lorena and Maribel (all names changed to protect their identities), were ordered released from Berks County Residential Center in Pennsylvania by an immigration judge after nearly 700 days in detention. This follows the release of two other young boys and their mothers held in Berks for over 22 months on 7 and 14 August.

Carlos and Lorena fled threats, intimidation and severe and repeated gender-based violence in Honduras before arriving in the United States in October 2015. They were held at the Berks County Residential Center, a US Immigration and Customs Enforcement (ICE) detention centre in Pennsylvania, for over 22 months. Michael and Maribel were also held there for over 22 months. They fled El Salvador in October 2015 following constant death threats to the family when Michael was targeted for gang recruitment.

#TheBerksKids are free. RT to say thanks to activists on the ground and the courageous lawyers. Spread the good news https://t.co/D6Ce2aaqAi pic.twitter.com/jMAmu8QT1O

Their release follows the recent releases of three-year old Diego and his mother Wendy (formerly referred to by the pseudonyms Josué and Teresa), and seven-year old Joshua and his mother Maria (formerly referred to as Antonio and Marlene), on 7 and 14 August respectively. Each of the four families is seeking asylum in the US after fleeing traumatic and life-threatening events, including kidnapping threats and severe physical and sexual violence, in their home countries of Honduras and El Salvador. They hoped to find safety in the U.S. Instead, they were jailed at Pennsylvania's Berks County Residential Center for almost two years.

All four children were granted a Special Immigrant Juvenile Visa (SIJS) in late 2016. With SIJS, a state court has determined that it is not in a child’s best interest to return to his or her home country because of abuse, abandonment, or neglect by one or both parents. In this instance, it was determined that these children “were abandoned, abused, or neglected by [their] father[s]…as such, [their] mother[s] are now the custodial parent, and responsible for all decision regarding their court proceedings, custody and care.” Therefore, it is essential that the mothers and children were released together. All four children have pending applications for legal permanent residency in the US. Further, their mothers have stays of removal granted while they challenge their removal orders in federal court.

Despite having sponsors to ensure their appearance at immigration hearings, their SIJ status, and pending applications for legal permanent residency, immigration officials refused to release these four children and their mothers from detention for nearly 700 days.

For years, Amnesty International has been calling on the Canadian government to suspend the "Safe Third Country Agreement" with the U.S. This is more urgent than ever under the Trump administration. Hundreds, if not thousands, of refugees are at risk of serious human rights violations – and of not getting the protection they need – if kept out of Canada and forced to seek asylum in the United States instead. That's why we've recently launched a legal challenge of the agreement.

Join the nearly 35,000 Canadians calling for a suspension of the Safe Third Country Agreement with the U.S.

Canada is not immune to committing human rights violations against refugees. Over the past decade, up to 800 children have been held in immigration detention in Canada. Children are placed in detention, with or without their parents, for several weeks and in exceptional cases for more than a year. You can join our call to end the immigrant detention of children here.

A massive thank you to the thousands of people across Canada who sent appeals to the authorities in support of the Berks kids over the past months. When we take collective action we can create great imapct!