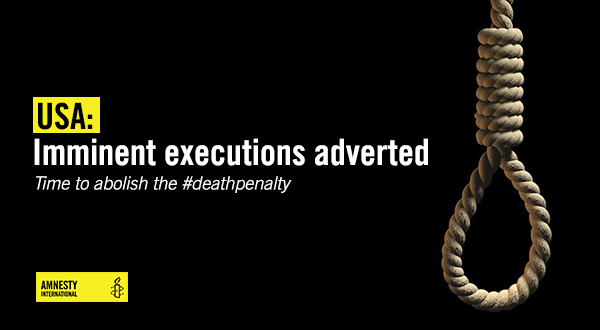 It’s not often we have positive news to share on death penalty cases. However, in August 2017 we heard back news on two cases in the US whereby the Governor in Missouri issued a stay of execution and the Governor in Arkansas announced his intent to commute a death sentence.

On 22 August, the governor of Missouri issued a stay of execution for Marcellus Williams who was due to be put to death later that day. The governor issued a stay of execution so as that he could appoint a five-member Board of Inquiry to consider “all evidence presented to the jury, in addition to newly discovered DNA evidence, and any other relevant evidence not available to the jury”. The Board “shall report and make a recommendation to the Governor as to whether or not Williams should be executed or his sentence of death commuted”.

In a statement accompanying his executive order, Governor Greitens said: “A sentence of death is the ultimate, permanent punishment. To carry out the death penalty, the people of Missouri must have confidence in the judgment of guilt. In light of new information, I am appointing a Board of Inquiry in this case.”

On 25 August, the Governor of Arkansas announced his intent to commute the death sentence of Jason McGehee. Jason McGhee had been scheduled for execution on 27 April, when he received a stay from a federal judge, and the parole board recommended clemency. The governor has now accepted that recommendation.

In his statement, the governor said: “My intent to grant clemency to Mr. McGehee is based partly on the recommendation of the Parole Board to commute his sentence from death to life without parole. In making this decision I considered many factors including the entire trial transcript, meetings with members of the victim’s family and the recommendation of the Parole Board. In addition, the disparity in sentence given to Mr McGehee compared to the sentences of his co-defendants was a factor in my decision, as well.”

For 40 years, Amnesty have been working to end executions. When we began that work in 1977, only 16 countries had totally abolished the death penalty. Today, that number has risen to 104 - more than half the world's countries.

READ - about Amnesty's work to abolish the death penalty >