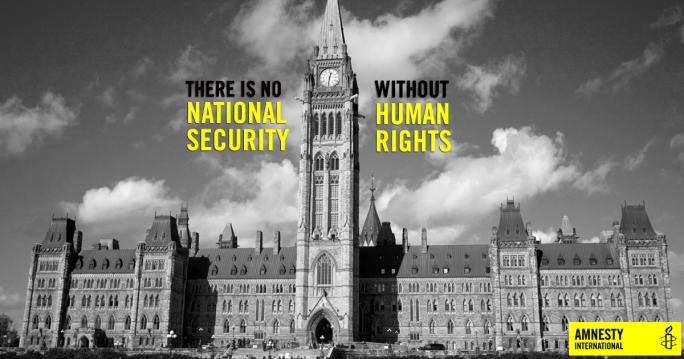 Canada must put human rights at the forefront of its approach to national security by adopting a rights-based framework in its upcoming reform of current laws, policy and practices.

“For too long, Canadians have been presented with the false and misleading notion that inescapable trade-offs must be made between protection of human rights and ensuring Canadians are kept safe from security threats,” said Alex Neve. “By adopting a human rights-based framework for national security, Canada can demonstrate leadership in addressing grave human rights shortcomings in its current approach while also better ensuring the overall security of its citizens.”

Amnesty International is calling for Canada’s binding national and international human rights obligations to be expressly incorporated across all national security laws.

Amnesty International is disappointed that Bill C-59 does not deal with other human rights shortcomings in Canada’s national security laws, that pre-dated the controversial Bill C-51 adopted in 2015, including provisions allowing individuals to be deported to a risk of torture in exceptional circumstances and the unfair immigration security certificate system, which Amnesty International has urged be repealed.

Amnesty International had also hoped that the government would act to address longstanding concerns about the failure to fully reject torture in Canada’s intelligence sharing arrangements with other countries. Read more about Amnesty International's response to Bill c-59.

Amnesty was also among 40 organizations and individuals from across Canadian civil society that issued a joint letter to government that lays out overarching concerns with Bill C-59, An Act respecting national security matters. Read the joint statement.