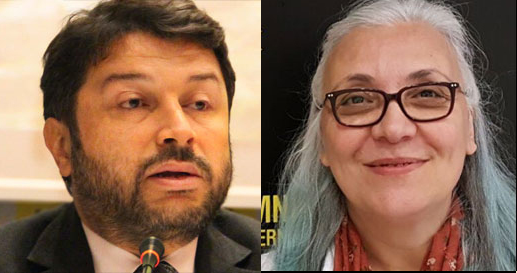 Police detained two leaders of Amnesty International within the space of a month.

>> UPDATE:  GREAT NEWS!  After more than 100 days in prison, Idil Eser and 9 other were released on October 25. Read more

Taner Kiliç, the Chair of Amnesty International Turkey, was taken into police custody on June 6 along with 22 other lawyers and charged three days later. Taner is wrongly accused of membership of the “Fethullah Gülen Terror Organization”, which the authorities blame for an attempted coup in July 2016. He was denied bail and remains in detention pending trial.

Idil Eser, Amnesty Turkey’s Director, was arrested on July 5 along with two trainers and seven other human rights defenders while attending a workshop in Istanbul. Idil Eser, as well as five other human rights defenders have been imprisoned pending trial on the suspicion of “assisting an armed terrorist organisation”. Another four have been released on bail, but are still under investigation.

The accusations against Taner, Idil and the others are ridiculous and baseless. The Turkish authorities must immediately and unconditionally release all of the detainees.

TAKE ACTION TO DEMAND THE RELEASE OF TANER KILIC

These arrests were just the latest in an escalating human rights crisis.

Thousands, including political activists, lawyers, journalists and others critical of government policy in Turkey are facing criminal prosecutions on trumped up terrorism charges.

An attempted coup in July 2016 prompted a massive government crackdown on both civil servants and civil society in Turkey. Those accused of links to the Fethullah Gülen movement – the group blamed for the attempted coup –  were the main target. At least 47,000 people have been detained, and there was evidence of torture in the wake of the coup attempt. Over 100,000 civil servants have been dismissed. Hundreds of media outlets and NGOs were closed down.

In post-coup Turkey journalists have been targeted in an unprecedented crackdown on all strands of opposition media. Together with the closure of more than 160 media outlets the space for dissent is ever-shrinking and speaking out comes at an immeasurable cost.

Currently more than 130 journalists and other media workers are imprisoned, and thousands more unemployed following the closure of over 160 media outlets. Independent journalism in Turkey is at the edge of the precipice. The fear of imprisonment for criticizing the authorities now means that newspaper columns and current affairs discussion programs, very popular in Turkey, contain little vocal dissent nor strongly diverse views.

The erosion of media freedom is not new in Turkey. In 2013 when huge Gezi Park protests erupted in Istanbul, a prominent news channel broadcasted a documentary about penguins rather than covering the protests. Journalists lost their jobs for displeasing the authorities. Critical media outlets were taken over and their editorial line changed to a more compliant one.

In 2016/17, violations of human rights by security forces continued with impunity, especially in the predominantly Kurdish southeast of the country, where urban populations were held under 24-hour curfew. Up to half a million people were displaced in the country. The EU and Turkey agreed a “migration deal” to prevent irregular migration to the EU. This led to the return of hundreds of refugees and asylum-seekers and less criticism by EU bodies of Turkey’s human rights record.

TOPSHOT - Women's rights activists gather to march through Taksim Square to protest against gender violence in Istanbul, on November 25, 2018, on the International Day for the Elimination of Violence against Women. (Photo by Yasin AKGUL / AFP) (Photo credit should read YASIN AKGUL/AFP via Getty Images)
News

Turkey: Targeting of LGBTI people to justify quitting convention on combating violence against women is dangerous

Turkey: Students facing three-years in jail for celebrating Pride must be acquitted

Turkey: Convictions of human rights defenders in the Büyükada case